Comic book superhero fans love to argue. Who would win in a fight – Superman or the Hulk? What’s the best agent for size/mass change – White Dwarf fragments or Pym Particles? Does death in comics really matter?

Death in comics is one of the bigger points of contention amongst superhero fans. While characters like Obadiah Stane, Roger the Homunculus and Gwen Stacy remain in the grave, others like Superman, Mockingbird and Bucky Barnes have died and since returned. The inconsistency spurs debate amongst fans, journalists and pros alike. In worlds where metal bracelets deflect bullets and middle-class kids from Queens gain the proportionate strength of a spider, does death hold any meaning?

There are numerous cases in superhero comics of temporary deaths giving creators a chance to showcase lesser-known characters, allowing some heroes and villains to catch the comic-reading public off guard and climb that invisible ladder between primary and secondary characters. Sometimes, the change in the status quo gives readers a chance to think about characters in a new way and sometimes, a character can graduate into a full addition to the mythos in the public consciousness.

Case 1: The Breaking of the Three 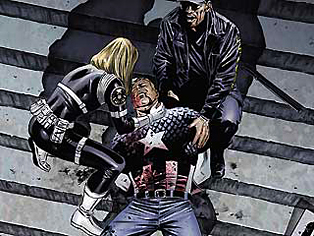 Captain America, Iron Man and Thor have served as the “Big 3” of the Marvel Universe, leading the Avengers against threats from the Skrulls, the Kree, Ultron, Kang The Conqueror and a host of other super-powered villains. Together, those three heroes built the Avengers into a team that earned the moniker of “Earth’s Mightiest Heroes” time and time again. In 2004, that began to change.

That year, Marvel began the Avengers: Disassembled event. The first casualty was Thor. Breaking the Norse Ragnarok cycle, Thor went into hibernation and was presumed dead by his friends. Three years later, Captain America was murdered on the steps of a courthouse after Civil War.

There was a paradigm shift in the Marvel Universe. Tony Stark, the Iron Man, became the sole figurehead for the Avengers. Creators had a chance to show readers a world where Iron Man was the driving force behind the Marvel Universe. With this newfound responsibility thrust upon him, Iron Man and his founding Avenger pal, Hank Pym, worked to grow the Avengers via the U.S. government-sponsored initiative.

Mind you, all of this happened before Robert Downey Jr. portrayed the Iron Avenger on the silver screen and charmed the moviegoing public in 2008’s Iron Man.

At the same time, the newly resurrected Bucky Barnes blamed Iron Man for the death of his former mentor and friend. Bucky began a one-man crusade to take down Iron Man. These events would lead to both characters assuming more prominent roles in the Avengers franchise.

Iron Man eventually helped Bucky take on the mantle of Captain America, throughout the pages of Invincible Iron Man, Captain America, Mighty Avengers and New Avengers. During these events, Tony Stark fell from grace and built himself back up, learning from his success and failures. Bucky Barnes, through his courage and willingness to live up to Steve Rogers’ legacy, endeared himself to the hearts of Captain America fans.

With Steve Rogers now back from the grave, he and Tony Stark have reconciled and Bucky has returned to the identity of Winter Soldier. The two characters are reinvigorated and star in their own monthly comics today.

Case 2: A Tale of Two Cities
During Flashpoint, the big reveal at the end of the issue was that Thomas Wayne was the Batman in the Flashpoint timeline. In the Brian Azzarello and Eduardo Risso Flashpoint tie-in mini-series, Batman: Knight of Vengeance, readers learned the history behind this older Batman, as well as what a Gotham City without Bruce Wayne would be. 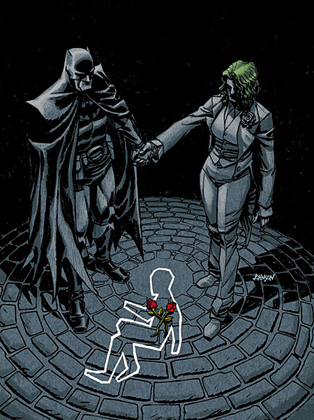 Thomas is more of a strategist than a detective. He’s willing to kill any villain who gets in his way. When a depowered Flash (Barry Allen) first asks Thomas for help saving the world, Thomas dismisses the notion and focuses on a kidnapping case in Gotham. It seems the Joker, the only familiar Bat-rogue he hasn’t killed, kidnapped Judge Dent’s twin children.

Thomas Wayne wasn’t the only one to survive that night in Crime Alley – Martha Wayne did, too. After her son was struck down by Joe Chill’s bullet, Martha had a psychological break and became the Joker. She’s the one villain this Batman will not kill. This dystopic vision of Gotham informs readers not just what a world without Bruce Wayne would be like – it also shows how vital a character he is.

This work takes the death and resurrection model and turns it on its head. Bruce Wayne spent the last 70+ years mourning his parents. Batman: Knight of Vengeance flips the formula and proves just how strong a character Bruce is by showing us what would happen if he died instead.

In the tapestry of dystopic fiction, Batman: Knight of Vengeance and Thomas’ characterization in Flashpoint has more in common with A Christmas Carol than it does with “What if Wolverine was Lord of the Vampires?”.

Thomas Wayne serves as a “Ghost of Christmas Yet to Come” to the reader and later to his son via a letter in Flashpoint #5. Knowing only what Barry told him, Thomas tells his son how proud he is and gives Bruce a sense of closure later elaborated on in Batman & Robin #1. Bruce is a stronger character, despite the recent reboot.

Case 3: The Fastest Man Alive
In 1985, Barry Allen died saving the Multiverse in Crisis on Infinite Earths. In 2008, he came back. That’s a long time to be dead. 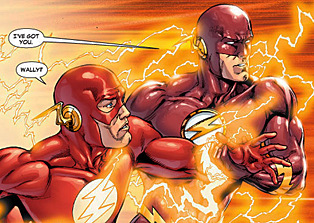 The death of Barry Allen is the best case for the impact of death on comics, even more so than Uncle Ben or the whole of Planet Krypton. Barry Allen’s Flash was the cornerstone of the Silver Age. Hell, his first appearance is considered by comic historians as the beginning of the Silver Age! So it is no surprise that his death is one of the major moments in comic book history. What came next, though, was something that had never been done before.

Wally West (AKA Kid Flash) took his mentor’s mantle in this new world and became the Flash of a generation. Through writers Mike Baron, William Messner-Loebs, Mark Waid, Brian Augustyn and Grant Morrison, Wally West’s character grew from kid sidekick to an icon.

Wally held the mantle of the Flash from 1986-2008 (he was replaced in short spurts here and there, but we won’t get into that now). He was the Flash in the popular cartoons Superman, Justice League and Justice League Unlimited. Wally is the Flash millions of people grew up with. Along with his own supporting cast, including Linda Park and Bart Allen, Wally came to the forefront and was embraced by fans. Sure, Barry came back, but Wally’s impact on comics as a whole is proof that forward motion is possible in serialized fiction.

In the real world, death is a permanent, irreversible and sobering fact. Superhero comics are always changing, constantly rewriting the past and are full of flights of fancy. In worlds with such flexible rules, death doesn’t have the same meaning there that it does in the here and now.

However, superhero deaths are not always about the death and return of a character – their aftermaths are about how surviving characters move on from the death and the lasting impact those actions have over time (especially after the inevitable resurrection). There are other comic demises that have had resonance over the years. Jason Todd’s death had a profound effect on Batman, even after his resurrection. Dollar Bill’s death lingers over the Watchmen’s narrative. And then there’s Jean Grey, whose whole gimmick is death and resurrection – her story is the impetus for 2012’s Marvel event, Avengers vs. X-Men. That’s the beautiful thing about the fantastic, though – unlike the real world, these characters can come back from the grave and reunite with those whom they left behind. Comics!

Toys of the Dead – Collectibles Inspired By All Things Gruesome