I write a lot about fantasy role-playing here – partly because those are the RPGs that are most dominant in the marketplace, and partly because that’s probably what most people think of when someone mentions role-playing games. But magic and monsters is not the only type of RPG out there – far, far from it, in fact. I’ve written about horror role-playing, so now it’s time to tackle something a little bit different: superhero role-playing.

When I was a kid and I was really getting into my RPG groove, I didn’t spend too much time playing D&D. I mean, I played the heck out of D&D, but it wasn’t the game we played the most. Nope, you could find us in my basement pretty much every summer afternoon playing the DC Heroes role-playing game. We were really into comics at the time, so we were thrilled with the idea of pulling on capes and tights, leaping through the air and knocking villains into next Thursday. I don’t remember too much about the DC Heroes system, except that it used action and resistance charts to determine success and failures, which fit the genre well and allowed for many situations that you’d see come up in comic books (such as low-powered heroes holding their own against vastly more powerful ones). 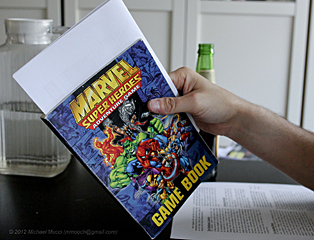 It’s been a long while since I’ve been able to play a superhero RPG, so I decided to remedy that. For my birthday this year, instead of forcing everyone to go out to a bar and buy me drinks until I’m so drunk that I can’t remember people’s names, I decided to host a day of gaming at my apartment. We played Magic: The Gathering, Dungeons & Dragons, and a superhero RPG that I’ve been sitting on since the ’90s: the Marvel Super Heroes Adventure Game.

The Marvel Adventure Game is different from almost every other RPG in that instead of using dice to determine the success of actions, it uses cards. Each hero or villain gets a hand of cards; each card has a variety of information on it that players can use to bolster their actions. The game-master, or narrator, can also pull cards from the deck in order to resolve actions, exchanges or just to move the story along. Those are the broad basics of the system; the details get a little confusing, especially when you’re so used to playing a dice-based game.

In my game we had the Hulk, Thor, Spider-Man and later Captain America responding to a distress call from Reed “Mr. Fantastic” Richards himself. Reed was stuck battling Annihilus in the Negative Zone, so he called on the Avengers to answer a plea for help from Agatha Harkness – the Richards’ one-time babysitter (who also happened to be a powerful sorceress). Our Avengers assembled clumsily after so much sword and fantasy role-playing. It took the players a while to get their superhero legs and meet Harkness at the Greenwich Village home of Doctor Strange.

Harkness said she had a vision of Strange in pain, being tortured by monsters, and she needed heroes to help save him. Thor unceremoniously battered down the door and began tromping around the house, setting off all manner of mystical wards that Strange had put in place to keep enemies at bay. Spider-Man found Strange’s manservant, Wong, unconscious on the floor and woke him up. Wong told them that demons had appeared from out of nowhere and pulled the Doctor into some kind of hell-realm ruled by the demon Satannish. In order to save the doctor, the heroes would have to open a portal to Satannish’s realm using Strange’s magical books and objects. In the process of procuring the book they needed – the dreaded and dangerous Darkhold – the Hulk managed to tear apart Strange’s library. They eventually found the book and Harkness warned the heroes that the Darkhold is so powerful that even touching it would taint your mind. Spider-Man webbed it up and the group opened a portal and entered the hell-realm of Satannish, where they would face off against the demon lord himself and a power-hungry Doctor Doom.

The diceless system had some pros and cons. Players had more say about what they could do and how effective they were at doing it. In order to succeed at actions, or exchanges, a difficulty number is assigned to the task at hand. Each card has a number in the upper left-hand corner, which when played could be added to whatever power, ability or skill the player wanted to use. If the total met or exceeded the difficulty, then: success! 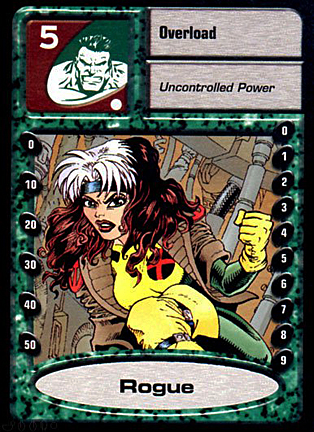 We played pretty transparently, so for the most part the players knew the difficulty number they needed to beat and were able to play cards accordingly. But as we became acclimated to the system, I kept the difficulty number a secret, and things were a bit more fun. I would just tell them something like, “This task will be challenging,” and then they had to bump up their power, ability score or skill rating. Sometimes they failed, which felt very true to the genre. How many comics have you read where the hero is giving it her all and just comes up short? Happens all the time, and it certainly happened a few times during our game.

The diceless system could be a little confusing as well. At times I allowed the players to automatically succeed at actions that should have been resolved with a skill check, because I would just forget to ask for one. It’s much easier to ask for a roll of a die than to ask your players to meet a difficulty number by playing cards. Completing actions can be a bit time-consuming, as players weigh the result of playing one card over another. Actions then become strategic exchanges.

The game has a few interesting rules as well: At the beginning of each exchange, the narrator flips over the top card of the deck and can use any of the information displayed there to influence the game. Each card displays a hero or a villain, a color or suit, an aura (which is a neutral dot), a minus or a plus and has some text on it. The suits are as follows: Agility (red), Intelligence (blue), Strength (green), Willpower (purple) and Doom (black). If a PC plays a Doom card, the narrator gets to keep it to use against the heroes – after the player applies the bonus to his skill, of course. For example: In our game, Doom made a pact with Satannish to take down the heroes and gain possession of the Darkhold. During the battle, I pulled a Doom card as my narrator card; the aura was negative and the text read, “Betrayal.” Thor called down the lighting and slammed both Doom and Satannish. I had Satannish decide that fighting a god and a Hulk was a bit more than he bargained for – Betrayal! – and he abandoned Dr. Doom in a puff of brimstone. The heroes eventually defeated Doom, freed Doctor Strange and got home to their Earth dimension more or less safe and sound.

Now, how does one explain to Doctor Strange that the Hulk destroyed his library?

Everyone had a lot of fun, and while there was some confusion regarding certain mechanics, most everyone got into it and had a good time. I think it also helped that they were playing such iconic characters, which made it easier because everyone knows what Spider-Man is capable of. Each player mentioned that they’d like to play with this system again, which is good, because I’m not quite done exploring the world of diceless RPGs.