If you’ve read some of my past toy and collectible previews, then you know that as much as I like toys, I like weird oddities just the same. So in the spirit of this holiday season, I’ve put together a gift guide of sorts to help find something different than the usual garbage that can be found strewn on a shelf at your local market. 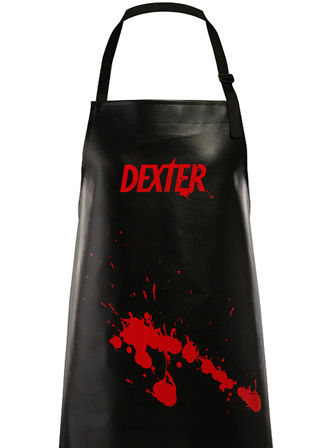 I love ThinkGeek! They have a plethora of interesting, geek-related merch, and I’ve never been disappointed with the quality of their goods and service. Every year I peruse their site to find something unique for a friend or family member. While building this guide, I realized how much I wanted to post from their site alone, but I must spread the love across the interwebz. As I was searching for stocking stuffers, I came across an item that is necessary for every kitchen. No, I’m not talking about the molecular gastronomy kit (although that’s pretty awesome too). I’m talking about the Dexter kitchen apron. I do not watch Dexter (don’t hate), but I can say this apron looks nearly identical to the one worn by Michael C. Hall. It is made of black vinyl and has some blood splatter as well as the Dexter logo, and it claims to protect against marinara splatter. Perfect for every budding Jeffrey Dahmer gore-met chef out there!

Since we’re on the subject of wearables, I have to slip in one of my personal favorites: friend of Unwinnable Andrew D. Gore’s Satan’s Sideshow. If I didn’t already own a Texas Chainsaw Massacre apron from SS, I would have picked up the Dexter apron just for me. I stumbled upon Gore at the early Chiller Theatre expos in New Jersey and fell in love with his stuff immediately! Be warned, however, as his subject matter is not for the faint at heart, though the quality is unequaled. For everyone that has asked me, “Where’d you get that Omen hoodie, son?,” consider this a gift from me.

Looking for something special for that special someone in your life? Do you like The Guild? Then look no further! Archie McPhee has a 24k gold-plated pendant in the form of Codex’s staff. While I don’t know anything about The Guild, I know Charles Moran can speak volumes about it. McPhee has a lot of fun stuff like Cthulhu tentacle fingers, absinthe candy and the amazing Charles Moran Chuckstache kit!

Need something for your gamer guy? How about the authentically detailed God of War Blade of Chaos by United Cutlery from BUDK. The blade is finely cast from zinc aluminum and looks as if it was ripped right from Kratos’ hands out of the television screen. This thing is awesome and would probably be better as a pair!

This Is Why I’m Broke is a website aggregator that funnels unique items from Amazon to Etsy into one page. A number of items caught my eye here, especially the Ghostbusters Proton Pack Backpack and the Bear Grylls Ultimate Survival Kit, both of which can be found at Amazon for a reasonable price. Also notable is the Bob Ross finger puppet from Etsy. 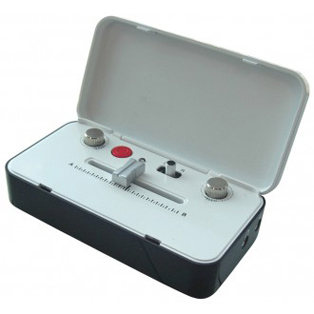 Here’s a fun little piece I picked up a couple of years ago that is perfect for the portable musician and iDevice enthusiast: the Lecci mini mixing deck. It runs on 4 AAA batteries and has two 1/8-inch audio ports. There is also a mini sliding fader to mix between two devices. Now, this thing is advertised for use between two mp3 devices, but you can hook up any audio device that you can convert to 1/8–inch. You can find this handy mixer at X-Treme Geek, and it’s on sale.

I learned of Vat19 from watching the Chris O>Matic Show, and now I know why. It had to be the 26-lb. Party Gummy Bear. A bear that size could probably last Skippy a whole year! They have a lot of fun toys and gadgets as well, like the PAC-MAN pot holder, the Original Beard Hat and the 5-for-1 Giant Beer Glass that holds five beers.

This wouldn’t be a proper gift guide without toys, so here are some of my top picks this holiday season.

Everyone likes Hot Wheels, and Mattel got my attention with their Hot Wheels Wall Tracks. I can remember having a suitcase full of track that my brother and I used to set up and play with for hours. The only problem was space. We had intricate designs that used to span multiple rooms of our house. If you’re in a small house or live in a metropolis then you know space is hard to find, so this is the perfect solution. Better yet, they use the 3M Command Strips so as not to leave holes or residue on your walls.

Also from Hot Wheels is the Video Racer Micro Camera Car. It’s $55 for one car and might be the highest-priced retail Hot Wheels vehicle, but what you get is a mini video camera that can record 12 minutes of video and can also be attached to bicycles, skateboards and helmets, making it a cheap alternative to a sports camera. 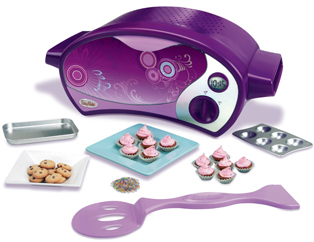 Hasbro released the Easy-Bake Ultimate Oven in the fourth quarter. It features a heating element, rendering light bulb models obsolete, and introduces the ability to make cupcakes. I’m sure they’ll return to the kind of savory fare of a similar oven recently recalled due to safety issues.

If you’re in a toy store and happen through the action figure aisle, do yourself a favor and pick up the Marvel Universe Sentinel. Last year, Galactus won Best (sort of) 3 ¾-inch figure for many reasons, and the Sentinel is high on my list this year. He’s 16 inches tall and comes packed with Wolverine ready for war. He’s topped off with classic phrases and lights. What more could you ask for?

Finally, I have to mention Sideshow Collectibles. They have a new 12-inch G.I. Joe ninja in black under the Black Dragon guise, although it looks nothing like the 3 ¾-inch action figure, and at $135 it’s too rich for a palette swap. They also put out a premium format Baroness that stands 22 inches and looks drop-dead gorgeous. Please note these are pre-orders and won’t be available until 2012. The standout for me is the Hot Toys Luke Skywalker (Bespin Outfit) DX Series 12-inch figure. These figures (that’s right, there are two!) are badass! They are an identical likeness to Mark Hamill and feature him in his post-Dagobah outfit complete with light-up weathervane and “magnetic severed right palm stump.”

To see if Ken can uncover the mystery of Santa’s sack, follow @UnWInToyHunter.