‘Tis the season for sharing, and we here at Team Unwinnable couldn’t agree more. We also believe that some of the best Christmas movies aren’t really about Christmas at all (we’re looking at you, Gremlins). So in the spirit of giving, we present a Home Alone fan fiction tale by Bee Tee Dee. We find Kevin McCallister, now in his early 30s, still practicing his craft…

Kevin looked down at the crook and swore. He was done – dead already. He’d tripped on the edge of the kitchen’s warped linoleum floor while entering the house, cracked his head good on the edge of the counter and that was that. No way now that he’d touch the electrified banister, his skeleton becoming briefly visible to the naked eye. No chance he might open the door that was rigged to catapult a mace-filled L’eggs panty hose egg to the eyes. 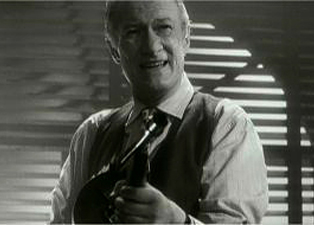 The Criterion Blu-ray of Angels with Even Filthier Souls had been cued up and the firecrackers arranged for nothing. This dumb crook would never be fooled into thinking there was a Tommy gun-toting gangster hiding in an upstairs bedroom, causing him to back away from the bedroom door, fall through a hole in the floor and land in a pit filled with glass ornaments.

Kevin hated to think that he needed to do this, but he had never been quite sure what else to do with himself. He possessed no saleable skills to speak of, and he couldn’t think of any other activity that felt quite so satisfying.

He had tried his hand at writing. He had tried to sell his story, but after some initial buzz hardly anyone wanted to touch it. His first encounter with the Wet Bandits had captured the nation’s imagination, sure, but public opinion plummeted after Old Man Marley went and murdered his son. Worse, he didn’t even have the courtesy of doing it with a snow shovel or mummifying him with sidewalk salt. It was just a regular, run-of-the-mill gun slaying. Nothing creative about it at all.

But there were other problems with Kevin’s story. For possibly the first time in publishing history, a childhood memoir was dismissed for being too extraordinary. What really soured the deal was the second part – Kevin’s adventures in New York City. This tale convinced publishers that they had another James Frey on their hands, and so Kevin gained a toxic reputation.

Sure, police reports bore out the whole business with the toy store break-in and the rigged townhouse, but there was no way Kevin could prove the Pigeon Lady existed, and she was, to Kevin’s mind, an essential part of the story. Now, when he found himself revisiting his manuscript for the 10,000th time, Kevin had to admit that it did sound especially implausible: A kid winding up in almost the exact same situation two Christmases in a row, right down to the whole bit about befriending a kindly but misunderstood old person. But it was true!

Anyway, writing wasn’t Kevin’s true calling. He needed to be out there, in the trenches. He needed to catch bad guys. He could still reel in a few would-be burglars by hitting various seedy bars, throwing around money and bragging about riches he had stashed in a mattress, in the hopes that a few lowlifes would think they had a real Herb Clutter on their hands.

After the real estate bubble burst, there was no shortage of abandoned houses to lure crooks into, but it was getting harder and harder to find good bad guys. Harry Lyme had died in prison, and Marv Merchants had apparently been released but was lying low, deeply paranoid.

There were plenty of other criminals out there, of course, but most of them were either too smart or too dumb for Kevin’s purposes. This year’s crook – the one lying dead in the kitchen of the abandoned two-story colonial Kevin had rigged up – was merely a low-level Chicago coke dealer Kevin had lured in with some help from a call girl he knew. Kevin’s eye fell on a small spider walking across the dead crook’s back and for a brief instant he thought of his brother Buzz and his old pet tarantula. Buzz was a hedge fund manager now with a company called, amazingly enough, Spider Capital. Kevin found himself once again wondering if he’d chosen the wrong path.

He heard a gravelly voice from outside: “Why the long face, Marmaduke?”

“I thought I told you to stay in the van, Buster!” Kevin shook his head at the rumpled old man standing on the patio. It was Buster, the new friend Kevin had discovered in a homeless shelter back around Thanksgiving. Buster claimed that he was the real Buster Poindexter, a jump blues singer whose identity David Johansen had stolen in the 80s so he could “jump around like an asshole singing ‘Hot Hot Hot.’”

Buster stepped over the corpse and ambled into the kitchen. “Nice digs!” he said, leaning against the counter.

“You sure are, kiddo! Here, take two of these. Buster’s orders.” Buster proffered the bottle of schnapps he was clutching in his fingerless gloves. 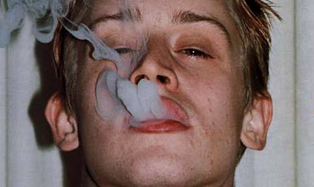 Kevin waved it away. Ruefully, he recalled the inspiring speech he’d hoped to deliver to Buster in a quiet moment just like this, a speech that would have helped give Buster the confidence to swoop in and rescue Kevin at the last minute if the crook managed to survive his gauntlet of traps. Kevin had intended to draw an analogy between Buster’s bitterness and the way Kevin felt when he got sick and his role in the 4th-grade play had gone to one of his classmates. In the end, Kevin would explain, it didn’t matter if no one else knew how great he was, as long as he knew it. Looking at Buster now, he wasn’t so sure that nugget of childhood wisdom would have accomplished anything.

“So whaddya wanna do, kid?” Buster asked, as he stumbled over to the sink to knock the ash out of a dollar-store pipe. His legs swung dangerously close to a tripwire that would’ve set off a flamethrower aimed at the kitchen floor. Kevin thought of Buster jumping around on one foot screaming “Hot! Hot! Hot!” and he couldn’t help but crack a smile.

“That’s more like it!” Buster said. “Letcha heart be light!”

Kevin shrugged and grabbed the flask from Buster to take a long swig, then pronounced: “Well, we could clean up all of my traps and carefully dispose of this body, or we could just burn the place down and go get drunk.”

Are you thirsty for more? Let Bee Tee Dee know on Twitter @Beeteedee.