During my brief stint in college, I once walked into my dorm-neighbor’s room to find him sitting on the floor, surrounded by empty Mickey’s bottles with a PlayStation controller in hand. He was transfixed by the game he was playing. The graphics were amazing and the animation fluid. I, too, became hypnotized watching Solid Snake choking out enemies from behind, shooting guards in the head with a silenced SOCOM pistol and gaining access to each security level. He was playing now-legendary videogame creator Hideo Kojima’s Metal Gear Solid. It was an amazing leap forward in gaming at the time and would start an obsession with me for years to come.

Thirteen years later, I stood impatiently in a 20-person-deep line at GameStop, watching those who did not preorder Call of Duty MW3 be turned away. My turn at the counter finally arrived and the clerk simply asked “PS3 or Xbox?” 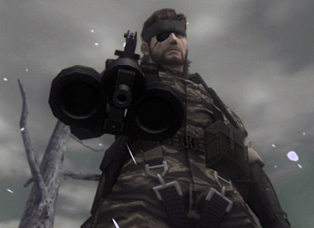 I decided to check out MGS 2 first. This game is the oldest and shortest, but it’s also one of my favorites in the series; a perfect way to get back into the control scheme and refresh myself on the overly-complex storyline. I expected the most improvement with this game (cleaned-up graphics, improved cutscenes, updated controls and maybe some new content). Instead, what I got were hastily re-rendered graphics, the exact same content and controls that felt dated and clunky.

How about integrating the extra missions (Snake Tales) into the game itself? How about starting the game with the VR Training instead of just hiding it in the Extras menu? The cutscenes – amazing when the game was first released – look extremely dated. Facial expressions (especially the eyes) look terrible. I wondered what all of the online reviewers were smoking when they stated that this game “looked amazing” and “had the most noticeable improvements.”

After playing this disappointment for a while, I decided to check out MGS 3. Perhaps the most complex in the series, Snake Eater was also hailed as a masterpiece. Without a doubt, the new HD version looks the best, feels the least dated and remains the most engaging story in the collection. At the same time, having come very late in the PS2’s life span, it also needed the least amount of improving. The only difference I can really see is that the graphics are a lot more detailed. While crawling through jungle brush you can see quite a bit of detail in every leaf. The story remains great. The control is above average and for the most part accurate. No complaints here! Being the 2nd edition of the game, it also includes ports of the original 8-bit versions of Metal Gear and Metal Gear 2: Solid Snake – great for seeing how the series started in the first place. 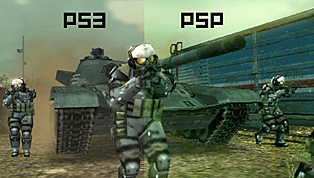 Lastly, I played Peace Walker. Of the entire MGS series, this is the only volume I hadn’t previously played. This game is also the only one to make the jump from PSP to home console. On a whole, the game looks good. The control is closer to MGS 4 and feels the best. While I have not played the original PSP version, the graphics are as good as can be expected from any handheld-to-home console port (save God of War: Origins). Not much could be done to improve the comic strip cutscenes. The only complaint I have is that some of the environments seem sparse and not very detailed. This could be attributed to going from a 4-inch to 45-inch screen. Still, they could have taken the time to add in more detail. Peace Walker also includes Konami’s “Transfarring” feature, in which players can save their game and transfer the PS3 data to a PSP. Having sold my PSP I could not try this feature (but I read that it works well).

On a whole, the Metal Gear Solid: HD Collection is nothing special and seems rushed to fill a gap in Kojima’s release schedule (after all, weren’t we promised Metal Gear Solid: Rising in the near future?). The improvements are average and nothing is much different from the original versions. However, the game is worth purchasing if you have never played the originals or if you are just a huge fan of the series.