MY BALLS! They have descended!

After all of my hooting and hollering about that icky, scary movie, I decided that I needed to stop being a wuss about rewatching it. So, with a huddle of old friends and new, a horde of stuffed animals and a bottle of sake I entered the realm of terror that I’d built up in my mind. You know what? It was not that scary. We didn’t even watch the whole movie, really. I sort of checked out with a hearty “meh” when the closet door was flung open and revealed the monster that had previously haunted my dreams. I was unaffected. I knew, in this moment, that I had become a man, and that watching the rest of the movie was going to be a spectacularly anticlimactic experience. 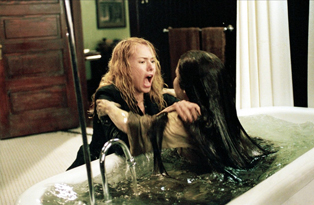 Well, maybe anticlimactic is a little harsh. It was an enjoyable time. Good friends. Good laughs. Co-ed group snuggling. Very little of this has anything to do with The Ring itself, but, as a movie geek, having an evening like that is almost as important as the movie. The collective experience of sitting down to a film with a group of fellow malcontents is one of my favorite things about the moviegoing experience, whether in a theater or in my very own living room.

Thinking back, that night when I first saw The Ring, I was huddled with two close friends in the last row at our local movie theater, clutching each other and begging to be scared. This time around, sitting in my living room clinging to my Lots-o’-Huggin’ Bear and Companion Cube, begging NOT to be scared out of my skinny jeans in the company of friends – most of whom were pretty ambivalent about the movie itself – was an entirely new experience. Was the fear I felt for the first movie just a byproduct of watching it with eager-to-be-frightened friends? I can’t really say, especially since I was the only one affected so ferociously by it. But it is interesting to compare being part of an audience to being one person watching. After all, funny movies are funnier in a theater full of laughter.

In this case, most of the terror was beaten down by a hearty evening of ridicule. During the first scene there is a moment in which the phone rings, and instead of the camera panning over to the phone, it pans to an alarm clock. This led to many “answer your clock” jokes every time a phone rang in the movie and remarks about checking the time on the phone. A few drinks in and there were laughs echoing through my house instead of screams. It seems that I am not the only one who feels that laughter is the best medicine for this sort of thing. In the comments section of my original article, Carla Nicole writes “I was scared sh*tless for weeks too! but you know what made me surpass that horrible movie? Watching Scary Movie (where they LOLED about the ring) I finally got it was just a movie and it could not harm me in any way.” In the immortal words of Pinkamena Diane Pie, you’ve just got to “giggle at the ghosties.”

So now with the giggles and terrors out of my system, I was able to sit back and rewatch The Ring as just a movie. I decided that as a fan of the genre there is a lot to like about it, a lot of very eerie, atmospheric stuff that I dig. A particular favorite moment is when Rachel (Naomi Watts) attempts to extract more of the images from the tape and pauses at the moment when the fly crawls across the image. She reaches out and slowly picks the fly right out of the screen. Her nose begins to bleed and the scene is then interrupted. The first thing I thought of upon rewatching this moment was Videodrome, and it really is deep in that territory. What happens when the line is blurred between reality and what is shown to us by the cathode ray tube? Not to imply that I think our TV sets are going to start turning us into walking tumors, or that ghosts can haunt VHS tapes, but it is obviously an idea deep in our cultural mythos. The thought of the television as some unholy gateway for the paranormal is nothing new, of course, but the TV and its components as a window or a doorway or a whorey staring eyeball has been scaring the wits out of us since Poltergeist.

Another reason that this film deserves some serious staying power in my horror rotation was brought up in comments by Julie, who said, “It does not follow the horror movie pattern that makes your brain say, ‘Oh, it’s all ok now’ when the movie is over. When they find her remains in the well and bury them, THEN it should be over,” but of course it isn’t over.

The Ritual Fails to Close the Circle
Previous Post

A Reason to Fire Up the DS Again