There are two kinds of monsters that need slaying in Qui Nguyen’s She Kills Monsters, currently enjoying its world premiere at the Flea Theater under the wings of resident company The Bats. We’re not talking about flesh-eating slime and bugbears, though both make an appearance, along with succubi and a creature called the Beholder whose joke I won’t reveal here (and a great piece of work by puppet designer David Valentine).

Another kind of monster entirely – more destructive by far than the mythic beings of Dungeons & Dragons, from whence the coterie of literal monsters comes – is regret, in this case over a teenage sister gone before her self-involved older sibling, preoccupied with boys and makeup and college, ever got to know her.

Killing the first type of monster, the imaginary kind you can smite D&D style with a roll of the dice and an imaginary sword, is a metaphor here for slaying much more difficult emotions – loss, guilt, anger. If this funny, geeky, exceedingly well-executed monster-butt-kicking romp of a production has a flaw, it’s that the literal monsters are much more effective than the figurative one. The script as rendered (and one assumes as written) doesn’t delve too deeply into the emotional territory at its core.

the most uncommon form of nerd – a girl nerd

In all fairness, it’s billed as a comedy, and it totally succeeds on that level. There are plenty of zingy one-liners that had the slightly nerdier-than-average crowd (targeted marketing?) laughing loud and hard through much of the show. The devastating loss of a sister that spurs the action can come off more as an interesting pretext for a lot of zany Dungeons & Dragons antics (staged with aplomb by director Robert Ross Parker) and affectionate fun-poking at geeks, rather than the other way around. The actors might have helped the play resonate more emotionally at the moments when it needs to, though it’s difficult to shift gears into this kind of realism when you’re carrying a sword and shield, smiting burlap-faced thugs and cracking wise every few lines. They may grow into the play’s serious side over the course of the run.

If you can accept it on those terms, as I expect most audiences happily will, She Kills Monsters is a really good time. Original story and funny script aside, it’s almost worth seeing just for Jessica Pabst’s Dungeons & Dragons costumes, and the aforementioned puppets.

The show opens with a narrator (Nicky Schmidlein, deadpan and quite funny in this guise) holding a staff worthy of Gandalf in Lord of the Rings. She informs us that we’re in “the land of Ohio, in the year 1995,” a comparatively quaint age before World of Warcraft and massively multiplayer online role-playing games, and that we’re about to hear a story involving “the most uncommon form of nerd – a girl nerd.”

In an effective piece of shorthand storytelling, we then jump to a quick pantomime scene, in silhouette behind a screen, through which we get the background. Agnes (Satomi Blair) and her younger sister Tilly (Allison Buck) were born eight years apart and had seemingly nothing in common. Agnes was interested in typical girl stuff, and by the time she graduated from college she was a little bored with herself, we’re told via narration. Agnes wishes for a life less ordinary, and in her 20s, her wish comes to pass – when her whole family dies in a car crash.

Agnes’s notion that there would be time to get to know the geeky, introverted Tilly as she grew up is gone in a flash. (It’s a little hard to buy that two sisters growing up in the same house could be quite so estranged as these two, eight years apart or not, but that is the premise here.) Tilly didn’t leave much behind that would allow Agnes to discover the sister she ignored in life. One of the few things she finds is a binder containing a Dungeons & Dragons module, a fictional quest of Tilly’s creation. Tilly appears to us on stage never as a 15-year-old girl – as she would have appeared to her sister in life – but instead as Tillius the Paladin, a 20th-level healer-warrior with a coveted magical sword (and a fantastic costume) to prove it.

Agnes sets out to find Tilly’s dungeon master, Chuck (Jack Corcoran), a senior at the school where she teaches English and from which her sister would have been graduating in the year the story takes place. Chuck’s adolescent swagger is as paper-thin as his geek credentials are hefty, and he is one mean dungeon master. Almost before we know what’s happening, Chuck leads Agnes into her little sister’s fantasy world. We meet the warrior demon Lillith (Margaret Odette), the “supermodel” elf Kalliope (Megha Nabe) and the stoner demon Orcus, in a red Adidas warm-up suit with little horns, who has lost his zeal for D&D evil-doing (charmingly louche and apathetic as played by Raul Sigmund Julia). 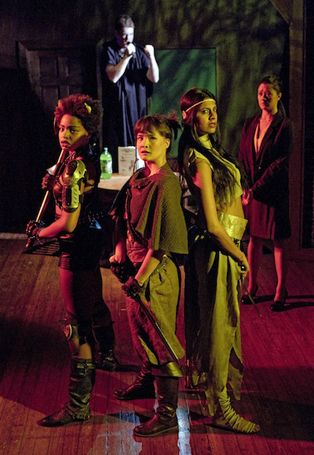 We also meet Agnes’s buttoned-up boyfriend Miles (Bruce A. Lemon), who eventually proves himself by his willingness to go the distance with Agnes in her quest to know her sister, all the way up the Mountain of Steepness to the Castle of Evil. It’s a little hard to believe, as the script asks us to, that Miles is at first under the misapprehension that Agnes is meeting up with high schooler Chuck in a sexual, as opposed to a geeky, dungeon. At one point Miles and Agnes battle it out in the D&D fantasy world, which seems both strange and superfluous.

We meet a fairy who isn’t all sweetness and pretty wings, and another geeky high schooler, the Great Mage Steve (Edgar Eguia), as he always announces himself after blowing a whistle worn around his neck, in a fun piece of business. Two succubi in shredded tartan skirts are a great metaphor for high school mean girls, but as is typical of the play, the effect bullying might have had on Tilly in real life is barely hinted at. There is a well-staged battle montage to LL Cool J, and a dance-off with the succubi to C&C Music Factory’s “Everybody Dance Now,” both of which are as much fun as they sound.

We also see Agnes erupt in anger at her students in her frustration to get closer to a sister who exists only in a role-playing game, and we see her imagined conversations with Tilly in the guise of Tillius. “I would never forget about you,” she tells this conjured version of her sister, to which Tilly replies, “You did when I was alive.”

Another slight weakness is that – perhaps like Agnes – we don’t learn that much about Tilly the person, as opposed to Tillius the Paladin. One major surprise is revealed, but we still don’t really know this girl. It’s easy to forget, the way the play is written and staged, that most of what we see is all taking place in Agnes’s mind; it’s interesting to remember a time when games like this relied not on amazing feats of computer animation but on our imaginations.

Fight scenes and all, the whole show flows very well thanks to Ross Parker’s direction. He works wonders with one round table, which transitions seamlessly from a basement setting for a D&D game; to the office of Agnes’s best friend, guidance counselor Vera (Brett Ashley Robinson is excellently tart here); to a promontory from which to leap into battle. The D&D quest’s denouement and its fog-drenched aftermath (the lighting design by Nick Francone, who also did the set, works wonders) are seriously impressive. (Sound designer Shane Rettig also deserves mention for, among other things, the splurt noise that we hear when a character dies. And Mike Chin and Jim Ludlum kept the numerous fight scenes inventive).

She Kills Monsters is highly entertaining, but one senses that with a few minor adjustments it could succeed on both a comedic and a serious level. Maybe if we saw a flashback scene or two of Tilly and Agnes living together at home when Tilly was still alive – if we ever got to see Tilly as a 15-year-old, not a Paladin – Agnes’s loss might seem more real to us. We know intellectually that for Agnes, the trip into Tilly’s D & D world is a quest to know the sister she lost, but despite Agnes’s occasional outbursts, in practice it feels more like what it was for Tilly in life – a fun, fantastical escape. She Kills Monsters is very worth seeing, but in future iterations – or perhaps when these actors find their stride – maybe its emotional punches will equal its monster-slaying ones.

Olivia Jane Smith is a longtime friend of Unwinnable and when we saw her take on She Kills Monsters on New York Theatre Review, we just had to run it here as well. Big thanks to her and her editor, Jody Christopherson, for making that happen!