A battle rages on the frozen wastes of Starkiller Base. A First Order Stormtrooper takes aim and fires off her F-11D rifle. Finn deftly rolls out of the way, dodging the attack. Rey, spotting an opening, equips her lightsaber and strikes. Kylo Ren blocks and uses the force to immobilize his opponent. Overhead, a First Order Tie Fighter rains down cannon blasts while BB-8 scrambles to support its allies. This dance continues until there is only one side remaining, signifying a victory for either the dark or light side.

Star Wars: Destiny from Fantasy Flight Games attempts to emulate the feel of the franchise’s greatest battles within the framework of a one-on-one card game. Each player chooses a few characters from either side of force and sends them into a skirmish with characters from the other side. Each character has an associated die or dice that players roll for various effects such as doing damage or providing shields to their team. Only a select few character and support cards come with dice. The rest of the cards serve utility purposes like mitigating damage or letting you reroll dice.

Fantasy Flight has designed Destinty in such a way that each round feels like its own battle, a quick exchange of blows that sees the characters strike and retreat to recover. Players receive only five cards and two “resources” per round; you can only get more resources via card effects or dice rolls. This makes those powerful 3 and 4-cost cards extra tempting. It also serves to provide players with short term goals so that there is always something to aim for. The result is a game with little downtime and an intense back-and-forth.

Because each round continues until both players have chosen to pass, each turn feels like a movement in a chess match of attrition where you hope that your scarce resources can outlast your opponent’s. It’s a very fun and strained structure that goes a long way in selling the sense that this is battle. As you and your opponent start to get a feel for the ebb and flow of battle, turns will begin to move very quickly. It feels at times like you are participating in Rey and Kylo Ren’s fight on Starkiller Base at the end of Episode VII.  Kudos to Fantasy Flight’s design team for their ability to mimic the fast-paced duels of the films.

One thing that I’m not sold on is the reliance on dice rolls. This being a card game, there is already a fair bit of luck involved. Add dice rolls to the mix and it can sometimes feel like you have little control over your actions. Instead, your choices may be made for you thanks to a particularly bad roll or draw. There are lots of ways to mitigate the randomness through card effects, but it doesn’t go far enough.

Another concern I have is portability. Traditionally, a selling point of the CCG genre has been its compact, travel-friendly format. Have a deck? You can play a game nearly anywhere. With Destiny, there are more components than just cards – there are also the bulky dice and chits representing damage, resources, and shields. As the game grows and more cards (and their accompanying dice) are released, it could become cumbersome to haul around. I worry that this might limit Destiny’s appeal. 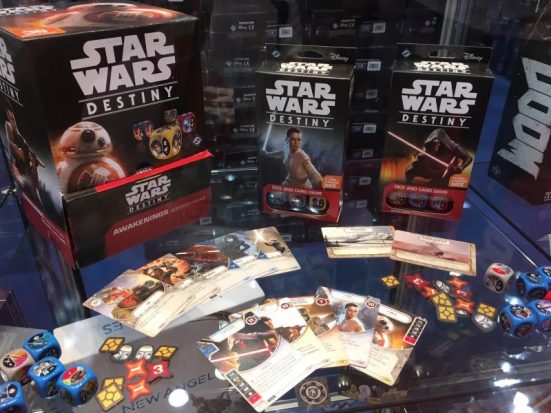 These complaints do little to diminish my enthusiasm for Destiny. I love the quick pace, the Star Wars theme shines through in spades, and the collectibility appeals to me in a way I haven’t felt since my Magic: The Gathering days. All this praise comes after only playing the two available starter sets; I have yet to dig into any booster packs or meddle with tweaking decks or building them from scratch.

Collectible card games can be dangerous like that. The beckoning of dozens of booster packs and the allure of rare cards can be powerful. Building and customizing your decks, a hobby in itself, can be just as satisfying as actually playing the game. Pair it up with Star Wars, and forget about it, I’m down a rabbit hole the likes of which I haven’t seen in years. Destiny may very well be the game that gets me back into collectible card games.