At the opening of Metal Gear Rising: Revengeance, four years have passed since the events of Metal Gear Solid 4. As the story goes, the Sons of the Patriots system used to control private military company soldiers has been disabled, the subsequent the war economy bubble having burst. In the wake of a flagging post-SOP war economic system (Keynesian Belliconomics?), a rogue PMC organization known as Desperado Enforcement has orchestrated a series of terrorist incidents.

Typically, the responsibility for stopping Desperado would fall to Solid Snake, the perennial grizzled hero of the Metal Gear series, presumably retired after the fall of SOP; this time, however, the job falls to Raiden MGS2’s surprise platinum-blonde spy who triumphantly returned as a nanomachine-enhanced (and bonafide badass) cyborg in MGS4.

But Raiden is not Solid Snake.

Within the first twenty minutes all the restraint I’ve employed in past Metal Gear games has gone out the window. In the first mission I’m cast into battle with a familiar enemy, MGS2’s giant mecha-Gojira-esque nuclear horror Metal Gear RAY. In Metal Gear games past, avoidance has always been name of the game.

In Revengeance, I’m prompted to run headlong into battle, watching as Raiden njnja dashes around the unmanned beast’s lumbering legs, deflecting projectiles. As I tap the controller, Raiden slices at RAY’s heels until its outer plating is sufficiently weakened. Entering “blade mode” ­– Revengeance’s slow-motion mechanic that lets you manually directing the angle of Raiden’s sword swipes with a flick of the thumbstick – causes the enemy’s armor to fall away like so much box-cut cardboard. 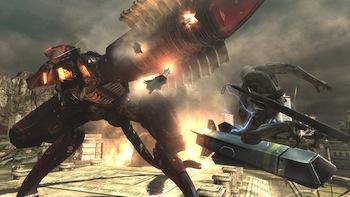 As more enemies arrive, alternating light and strong attacks sends Raiden into a chiffonade whirlwind, flipping his blade between his hands and feet until there’s nothing around him but an assortment of finely sheared limbs. Combat, however, isn’t strictly offensive. With deft directional twitches and a sense of proper timing Raiden can parry almost any attack, whether it’s a whistling blade or the sweeping leg of an impossibly large robot.

Revengeance’s countering feels neither cheap nor labored – more like a disapproving kendo master who, when an errant blow sends Raiden careening across the screen, simply snorts in derision and turns away – it is not my opponent’s blade which struck me, but my lack of discipline. When properly executed, though, I feel as though Raiden is untouchable. Like lightning.

After hours of enemy limbs piling up and with the game nearing its end, I felt strangely uneasy about the wanton gore I’d been spilling. It was jarring to play a Metal Gear character so steeped in traumatic violence, as Revengeance revisits Raiden’s blood-soaked past in some detail.

I’ve always latched onto Metal Gear’s themes of nonviolence; the premise of each installment tasks the player with stopping the proliferation of weapons of mass destruction, be they bipedal, amphibious or rocket-powered nuclear battle 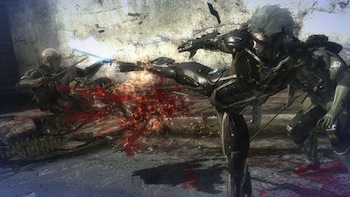 tanks. Not only that, but as Snake, I always played with the aim of proceeding non-lethally, either by avoiding enemies or
employing anesthetic rounds to knock foes out. (Regardless of whether I always succeeded, there has even rewards for doing so since MGS2.) Yet Revengeance flips that reward system around in a very grotesque and, I would argue, deliberate way.

Distressingly, cutting a path through each member of Desperado is an exercise which ­– from both the player’s and Raiden’s perspective – feels seductively, intoxicatingly, instinctually good. Much more so than proceeding stealthily, in fact. Though you’re given limited range to sneak around as a nod to Metal Gear’s legacy, Raiden’s quick, twitchy controls don’t necessarily lend themselves too well to doing so.  Even my targets entice me give in to this bloodlust. Early in, the referentially-twisted rhetoric “Give war a chance” is used, an idea later expounded by one of Revengeance’s equally insane villains: “Think of all that war has given us,” the boss says. “Technology, innovation, a common purpose.”

And so, I would argue that, given the penchant for meta-narrative in past Metal Gear games, that the gameplay and narrative, despite being handled by separately by Platinum Games and Kojima Productions respectively, are married in such a way that caused me at least to stop and consider the violence I was causing, a reaction I haven’t ever really had with 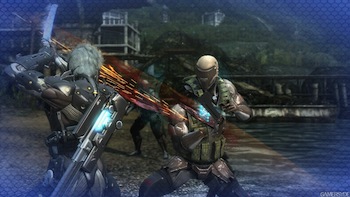 the series. But the more I thought I about it, the more I began thinking about these ideas from the game makers’ perspectives.

In a world that’s both repulsed and transfixed by their products, creating hyper-violent games like Metal Gear Rising can afford a developer an audience, technology, and a place in the video game industry, just like the dopamine-fueled, hyperviolent gameplay found in Revengeance itself – a notion more sobering and affecting than any impact statement on violence game violence.