I am no weenie.

I grew up on horror of all sorts. My father, from whom I inherited the lion’s share of my geekitude, is an avid fan of the classic horror from the ’50s and ’60s, so there was a good deal of Edgar Allen Poe by way of Vincent Price in my formative years. It wasn’t long before I started sneaking in ’80s horrorfests, probably starting with A Nightmare on Elm Street and Child’s Play and then working my way through all of the classics – The Exorcist, Poltergeist, The Shining (the majority of them from between the ages of eight and eleven).

When Scream came out, an older cousin showed it to me and I still have fond memories of scouring the movie store that summer for every movie referenced within. Carrie was always a particular favorite of mine, and my mother even helped me create a gore-covered costume of the ill-fated prom queen that Halloween. No one in my 6th grade class got it, of course, but such is the life of a young horrorphile.

This isn’t to say that I never got scared – The Shinning, The Exorcist, Poltergeist, even The Blair Witch Project scared me the first time I saw them. But I am tough, some might even say slightly jaded, and the bottom line is that there is nothing I can’t handle.

So when I say a particular movie screwed with my head in a way that turned me into a quivering mass of jelly, I am more than a little embarrassed to admit that it was the American remake of Ring. 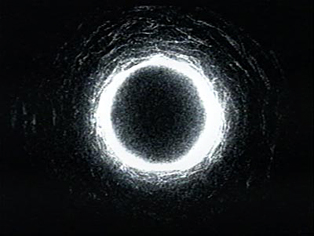 The Ring gave me a kind of panic disorder. I couldn’t be in a room with a TV in it. If the TV was turned off, I was paranoid that it would turn on by itself. If it was on, I was afraid of going past a channel with static.

But let’s start from the beginning.

I was 16 in 2002 when Gore Verbinski’s take on the Japanese horror film Ring hit theaters, and I was clearly full of myself when it came to horror movies. I fully admit that the plot is a little silly. Little evil ghost girl inhabits a haunted videotape? If you are cursed to still own a VCR and watch this tape full of twisted images of spinning chairs and ladies brushing their hair and writhing maggots turning into writhing bodies and back again, you would receive a phone call informing you of your last week of life. Seven days later, Spooky von GonnaEatYourSoulPants emerges from your TV and reduces you to a dried-up banana. Naomi Watts makes the mistake of thinking she can break this cycle and hilarity ensues. Doesn’t seem all too intense, right?

However, when the movie was over and I stepped back into the bright lights of the real world, all I kept saying was that I needed a cup of tea. I don’t usually drink tea, but in that moment tea was the only thing with the comfort level I needed to actually calm me down.

There was just something about the film that was so profoundly disturbing it put a crack in my already fragile psyche. I had to sleep in bed with my mother for the first three days after. I couldn’t talk about it in any detail without being reduced to tears. This all lasted a good two weeks. I am serious here; I am not exaggerating any of this. If anything, I am downplaying it.

Six months later, The Ring was on DVD and, horrifyingly enough, on VHS as well. I tried to psyche myself up so that I could get through it, but it was still met with pillow clutching and face hiding. In a way, it might have even been worse anticipating the appearance of certain things that had terrified me the first time.

And, of course, the minute the movie was over, the house phone rang.

A few years ago, around Halloween, I was spending afternoons wandering the aisles of my local Blockbuster in a desperate attempt to find something new and horrifying that would get me in the holiday spirit. I stumbled upon a copy of The Ring on sale for $12.99.

I thought to myself, “This is perfect! This movie really scared me. I’ve only seen it twice and haven’t seen it in at least five years. I’ll get it!”

Then I stood there, remembering. Did I really want to open this door again? Should I risk it?

“Nah, that’s stupid. I am just building it up in my head. It couldn’t have been that bad.”

But what if it was? What if I watch it, then can’t sleep for weeks?

After that, I started thinking about it and feeling bad. Why did this movie scare me so thoroughly? How could I let a movie have an emotional hold on me that was so great that I was afraid to watch it? Movies were supposed to be my friends, not my enemies. 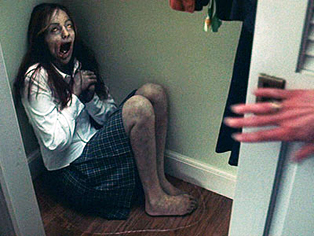 I kept coming back to the visual imagery in the film. There was something fundamentally wrong with it. Could an image be enough to seriously bruise the mind? And, if so, what was it about the images in this horror movie that made them so different than any others I have seen? During the weeks of sleeplessness after my first viewing, I couldn’t get the memory of the first victim’s face out of my mind – that shriveled, terrifying face, mouth agape, huddled in the closet. You only see it for half a moment, but it remained branded in my mind for months.

In my defense, even makeup effects master Rick Baker, who built the damn dummy, admitted it freaked him out so much that he wouldn’t get in the closet with it. At least I am in good company.

I’ve watched hordes of zombies eating people alive and vampires ripping out people’s throats. I’ve seen heads explode. Freddy Kruger, in giant worm form, half-swallowed Patricia Arquette. Charles Hallahan’s chest burst open to expose enormous, gnashing teeth. I have seen a lot of crazy shit, but nothing else I’ve seen has ever fucked with my brain even remotely as much as what is in The Ring. Maybe it comes down to the fact that raw violence doesn’t get to me as much as things that seem unnatural and disturbing – like a Tool video on acid.

I still have not watched The Ring again – despite many opportunities – and it upsets me that I can’t seem to overcome the fear I have of it. Really, folks – it is just a movie, for Pete’s sake! Why am I being such a weenie? My horror movie cred is spiraling down the tubes. Something about it got to me…and still has me, and this aggression will not stand! So this is what I propose as a way of getting my super monster credibility back. The plan is to create a safe environment with friends and a blockade of stuffed animals and Nerf guns (in case of monsters) and with this I will rewatch The Ring for what will be the first time in almost 10 years.
If I survive, I will report back.