The Ritual is a mostly alright “lost in the woods” type horror film that greatly benefits from being released on Netflix and not being found footage. Being on Netflix, the barrier for entry is fairly low and being not found footage means the barrier to stay is also very low. It features a group of knowable, but generally not likeable, characters who get lost in the woods and then bad things start happening to them. For the most part, the movie is fine but ultimately fails in its final act.

Horror movies have a tendency to struggle pulling off the finale. From the moment that everything starts going to hell a horror movie feels as though it must hit an ever-moving target. Critics, audiences, and executives are torn over needing conclusion, needing to feel uplifted and needing to leave room for a sequel.

Think about a horror movie in these “beats.” The setup lays the groundwork for the danger, sometimes this is an early kill or a trauma the feels like a B Plot until it gets woven back in later. Next are introductions, we meet a whole bunch of characters knowing they won’t all make it to the end. Sooner or later, it all goes to wrong. Sometimes it’s the save the day plot that goes bad, sometimes its an escalation of something that was set up before, sometimes it’s the introduction of the danger to the main cast. Eventually, we learn critical information that either sheds new light on earlier plot points or allows characters to move forward along new paths now that everything has gone wrong.

Unfortunately for The Ritual, this information sharing moment goes horribly wrong. The set up is good, we understand why our main character is tortured. He makes a choice that I think most of us would have made and he makes it from a place of fear. Next, we meet everyone in earnest and get introduced to the setting. A little after that, it all goes bad. The

group gets slowly picked apart as happens in a “lost in the woods” movie but then just as suddenly as the main character is knocked out, the movie comes to a screeching halt. 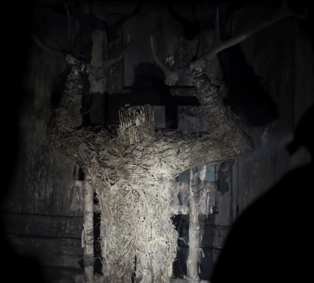 What’s great about it all going wrong is that the movie gets a sudden influx of momentum. You’ll forgive a lot about a film if it pulls you through it. The Ritual instead makes a bad left turn into exposition world where too much information is given over too much time. The information given to the main character doesn’t help them come to a new realization. Instead, the movie demystifies itself at a critical moment. We know too much now. What was once an ominous rustle is now knowable.

Here in the last act, the movie stops and changes gears to check off all the worst impulses of a filmmaker. We’re given access to the greater context of the monster. We get to meet a bunch of new characters we had no idea existed. We get to find out about a vision a character had and didn’t tell anyone until now. We get to see the monster in full view multiple times.

Worse, we really don’t need to know any of this. The nature of the monster and its history are never posed to us as mysteries that need solving or that could be solved. Suddenly at the 11th hour we’re given a deluge of information that add nothing to the film and instead force the audience to plod along until the finale.

That’s what makes The Ritual such a frustrating experience. It’s motifs and flair work when they’re given a chance to work. For the first hour and six minutes it’s an enjoyable horror movie with believable characters behaving in ways that make sense given their predicament. Then it stops, throws out that movie I liked, and becomes something else for 20 minutes before the credits roll.

Mute: Sci-Fi is a Genre, Not a Setting