“In space no one can hear you scream.”

This may be true in space, but in the close confines of an air vent or hallway, your screams are quite audible. One of the key components in the Alien franchise are those scenes of claustrophobic terror when something nasty and extraterrestrial is coming to get you. These scenes happen by the bucketload in Aliens: Infestation, a surprisingly good game for the Nintendo DS, a system that I thought had been put out to pasture by Nintendo for the 3DS. It’s an abnormality of a release by Sega, because it’s a dark, mature, fun and sometimes disturbing game on an eight-year-old system that has tended to cater to the kiddies more often than not. Yet here it is, a great release that comes in the twilight of the last system that some consider Nintendo truly got right.

You start the game out with four Colonial Marines, each one enough of an archetype to help you differentiate their dialogue scenes (they’re also usually wearing different-colored uniforms). These four Marines serve as ‘lives’, and if one dies there’s a good chance another will be found in the vents or freaking out in a random room. If you go through all four before that, though, it’s game over, man. 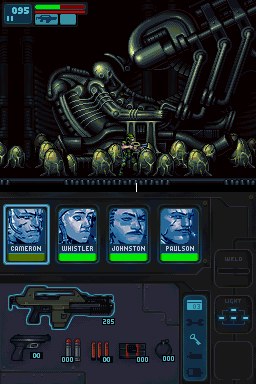 Something is amiss on the recently discovered Sulaco, which fans will remember as the ship from Aliens. While loose continuity is kept from the first two movies, it seems like the continuity of Alien 3 has been ignored, which I’m totally OK with. For years now I’ve been trying to forget that the opening scene of that movie ever happened!

The game progresses from there in the “Metroidvania” style: search the ship/colony/base for items so that missions can be completed, sometimes having to double back when items are found that allow you to access previously inaccessible areas. Along the way, various enemies block you: initially they’re battle droids and genetically enhanced soldiers, but soon enough you start encountering xenomorphs aplenty. Fans of the movies will love the accuracy of the sound effects. Everything from the pulse rifle sounds to the screaming aliens is ripped straight from the movie. So far my vote for the most disturbing sound come from the chestbursters as they pop out of fresh carcasses and emit some kind of wet metallic baby noise (like in the first film).

Other nice details are that the upgradeable weapons found along the way are also all accurate to the movies, and much like Castlevania: Symphony of the Night, the backgrounds of the various levels have many little details which actually make the world feel real and lived-in. It’s pretty awesome and horrifying to wake up in a strange place at one point in the game, only to see the dead Space Jockey from the derelict ship in the first film pop up in the background.

If there are any problems I had with the game, it would mainly be with some of the combat mechanics. For the most part, I got the hang of it and managed to utilize the stylus effectively, but there were still awkward moments where I was stabbing the screen trying to activate a grenade or switch from the massive rail gun to a pistol, all the while being shot up or eviscerated. On the plus side they occasionally change it up from blasting away on foot to battles in the Power Loader or blasting away in the APC (Armored Personnel Carrier) from Aliens.

This is a fun game that I highly recommend to folks like myself who have held on to their DS and would play it more if something new came out that was worthwhile and maybe skewed for a slightly older target audience. Infestation brings to mind Contra 4, which I felt was one of the last innovative action games to come out for the DS (Grand Theft Auto: Chinatown Wars was pretty great too). I never understood why there wasn’t more diversity on the system, and had essentially given up on the prospect of ever playing anything new on it until now. Sega has always been good for innovative and fun games back in the day, and considering the retro rabbit they’ve pulled out of their hats with Aliens: Infestation, I’m hoping to see more.