Last year, Capcom released the much-anticipated sequel to Dead Rising. While I’m confident the game was successful and I know it’s very good, something was missing. It was missing Frank West. Sure, we got a taste of Frank in the Case West DLC, but it didn’t satiate my desire to know why he wasn’t in the sequel.

This year, Capcom revamped Dead Rising 2 and gave us a “What If” scenario with our unfriendly neighborhood reporter. The result is Dead Rising 2: Off the Record.

After reaching fame through his ordeal at the Willamette Mall, Frank bottoms out and finds himself thrust into the Terror Is Reality game show to make some money and reclaim his status as savior. From the get-go, the game remains unchanged from Dead Rising 2. I only played through a third of DR 2, but I could see that the only difference in the new version is the addition of Frank West. 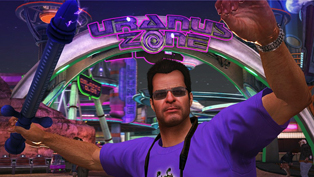 I loved Case Zero and thought for sure I would love DR 2, but I just couldn’t get into the Chuck Greene scenario. When I picked up DR 2: OTR, I was immediately captivated by Frank West yet again. I really wanted to progress in the game and realized that this should have been the true sequel to Dead Rising.

What returns? The timed gameplay experience returns as do the combo cards and ridiculous amounts of weapons. We got a new area, Uranus Zone, an amusement park full of playable midway games and devastating rides. My first day with the game I scored an achievement (“Safety Check: Failed”) for launching more than 10 zombies into the air with one of the rides. I drove around in a clowned-out ice cream van and a golf cart and only remember riding a motorcycle in the first version.

So, for the amount of upgrades in this version of the game, it makes me wonder if this should this have been released as DLC? Should it be priced lower? Am I, as a gamer, being ripped off?

Regardless of the ethics of a rehash, as a game it delivers. The camera is much easier to utilize, allowing you to capture even more graphic content. The graphics are sharp and the controls are fine-tuned. I love the ability to de-limb a zombie and seeing it shamble around with one arm.

Then there’s Sandbox Mode – what fans wanted from the first game. It’s a timer-less affair with challenges instead of missions. You essentially get to roam the whole map – which is absolutely covered in zombies – and either enter challenges or just go on a rampage. It is definitely rigorous for a single player and is probably a much better co-op experience.

If you didn’t pick up Dead Rising 2 last year, then this is the game to get. Otherwise, I would recommend this game for hardcore fanboys only. It’s a great game, but seems too little too late.

Compare body counts with Ken @UnWinToyHunter on Twitter. Dead Rising 2: Off the Record, from Capcom, is available now on the Xbox 360 and PS3. Check out the trailer here.

Capcom, Dead Rising 2: Off The Record