A convention is only as good as its swag. It is the blood and guts. People hoard free stuff like it is gold. They find the sweet giveaway, put it in a plastic bag and immediately begin searching for the next score. It has always been about the swag, so let Team Unwinnable help you find some of the coolest free and exclusive stuff at New York Comic Con 2011. 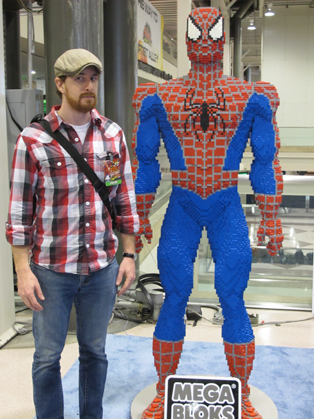 In typical MacFarlane Toys fashion, exclusive blood-splattered Walking Dead figures are the rare collectible at this NYCC. Those, along with the Ray Stantz Ghostbusters action figure, should be enough protection against zombies and ghouls. Check them out at the show store located in the front area.

Unless you have a lot of notebooks to cover, things to avoid would be stickers and postcards. However, the Chris O-Matic Show postcard playset is pretty awesome. Fueled on fun and imagination, it is hours of fun. Pick one up at the Comic Book Diner booth.

MEGA Bloks is front and center at the con. They now have some exclusive rights to Marvel and Halo. They can’t be missed, seeing that the booth is flanked by a life-size Spider-Man and Master Chief made of MEGA Bloks. After receiving a MEGA Bloks miniature Spartan warrior figure, we forgot all about that other plastic block company.

Animal Planet has a show called Finding Bigfoot. They were promoting their show by giving out beer. Some of Team Unwinnable went back four and five times to help find Bigfoot. They are located in the middle of row 600.

This one’s for all you boppers out there. Shirts For A Cure was giving away a massive Warriors poster, only it’s the Warriors reimagined as LEGO Minifigures. Can you dig it? It was massive!  There were reports of Ian actually smiling when he saw it. Visit Shirts For A Cure at Booth # 241 and while you’re there, snag a shirt or leave a donation to help fight breast cancer.

Look to the stars at the Celestron telescope booth. They are giving out flying discs. Some might call them Frisbees, but that would be like calling MEGA Bloks something they are not. Check them out at that most wicked booth number: 138. 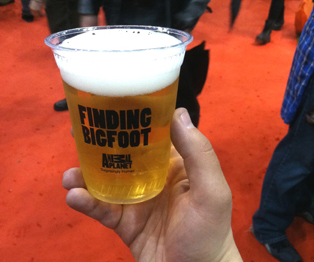 Activision is ready to give away everything for Prototype 2. They have shirts, giant foam appendages and more. Stop by them at Booth #738, really close to the Finding Bigfoot booth, if you know what I mean. [Editor’s Note: I’ve still not drank away the awful memories of the original Prototype.]

Dark Horse Comics, never one to miss out on some fun swag, has a Goon cutout doll available at their booth. Now you too can have the Goon protect your desk or nightstand from zombies and whatnot. Stop by and visit Dark Horse at Booth #1238.

Finally, one of this year’s best horror flicks is Tucker & Dale vs. Evil. A sendup of the hillbilly horror genre, the titular characters always have a cold one at their sides, so Magnet Releasing opted to give out free Tucker & Dale beer cozies to attendees. It’s one of the most fun freebies you can get at the con. Be sure to visit Magnet at Booth #1925 and while you’re at it, snag a free movie poster.

So what are you waiting for? Come on down to New York Comic Con 2011 and snag your swag (and buy stuff, too – it’s always good to buy stuff).

This Week’s Exciting Conclusion to the NYCC Photos!
Previous Post

The Dead Are Walking Again