The following is the latest in a series of journal entries chronicling the author’s descent into next-gen gaming degeneracy — from getting his first television in years to trying to figure out why the @$@”$)@ you need two goddamn directional pads just to walk down a fucking hallway.

Many of you have been enjoying Xbox Live’s Summer of Arcade, where you get to download and explore choice titles from the finest indie developers and qualify for a free gift in the process.

Never one to miss a party, I’ve jumped right on board and I am now reveling in the Summer of Microsoft Not Allowing You To Directly Purchase Downloadable Games, Instead Forcing You To Buy Uneven Amounts of Redeemable Points So That You’ll Always Have Leftover Crap You Didn’t Fucking Want.

There is nothing, to my knowledge, that I can do with my excess 400 Microsoft Points that is in any way worthwhile, except buy more Microsoft Points, add them to my measly pile, download another game and have more useless remainders.

At any rate, I’m playing Bastion and enjoying it well enough. It has some unique elements, such as the path falling into place in front of you, effortlessly and seamlessly arranging itself into buildings and other structures as you walk – proving there are no unions in this particular cyber reality. But there is an even more prominent element that has people buzzing, which inspired me to write this column in the first place:

I’m not going to delve into the apparently fascinating history of the voice actor, or provide any other useful facts, except to tell those of you who haven’t played the game that the narrator’s words mirror what you’re doing onscreen and provide a sort of pixelated play-by-play.

To me, this is all well and good, but as an older brother – who may or may not have found it hilarious at times to follow his two little sisters around, mocking their every movement – I think it falls woefully short of its nearly limitless potential.

The makers of Bastion, for reasons I can’t begin to fathom, decided to go for “cool” and “captivating” with their V.O. – instead of the far more effective “annoying” and “infuriating.”

Why would they do this? I, for one, firmly believe that outside the realm of broadcast sports, play-by-play should only be used for evil.

You’re doing your math homework.
It’s very, very important.
You’re adding and subtracting.
You’re trying to concentrate.
You have a lot of work to do.
Four five six seven eight, minus one times 10 plus 11.
You’re not in the mood for this.
You’re serious.
You’ve stopped laughing and your face is turning red.
You’re throwing things at me.
You’re pushing me across your room.
You’re slamming your door in my face.
I’m outside in the hallway but YOU CAN STILL HEAR ME.

Instead, the makers of Bastion decided selling games was more important than paying tribute to older brothers and other tormentors, which I’d label detrimental.

The Rookie of the Year, not to mention all the CITs and interns he has plagued in his 33 years, would gladly play a game that mocks one’s every dumbass step, one’s every tiniest hiccup and mistake – because, as every older brother, senior camp counselor and professional journalist knows, it can only make you stronger.

And not only would I play it, I’d pay for it. 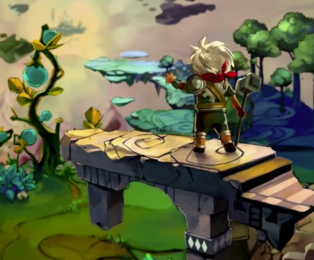 Matt Marrone has now finished this, his latest column, and is about to copy and paste it into an email to Unwinnable editor-in-chief Stu Horvath. But first he has to type out his Twitter username, which is @thebigm.