Demon monkeys, unearthed from their ancient burial ground and bent on consuming my flesh, chase me incessantly now, waiting for me to trip on a tree root or skim too close to a crumbling wall.

They’ve gotten to me more times than I can count. 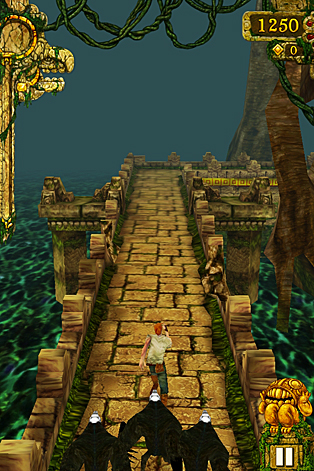 I became a fugitive on January 9 at 5:07 p.m., as I said. But my fate was sealed the night before, on January 8 at 8:25, when I received the following text from my friend Steph, a New York City art teacher.

“My students are all playing Temple Run. Have you played it? I’ll stick with Tetris, but Temple Run is a huge hit with the kiddies, so I wondered what you thought of it.”

“It’s an iPhone game. I had to make a sign on my classroom door: Temple Run-free zone.”

“They’re nuts about it.”

They’re nuts about it.

If only I’d ignored those words, written them off. Who needs to play a child’s game? I had long since stripped away the follies of youth to become a serious adventurer in the realms of Skyrim and Albion. Who needs to collect coins and power-ups anymore, unless in the service of a greater good?

But the next day I peeked. The demon monkeys started chasing me. I grabbed coins in midair, tilted my iPad to dodge left and right and scored points for every few hundred meters (hello Canabalt) and swiped the screen to slide (remember me, Mirror’s Edge?).

Five minutes after I started running, at 5:12 p.m. on January 9, I sent this message to Steph:

Matt Marrone has an imaginary sign on his bedroom door. It reads, “Temple Run-free zone.” Wait, what did you think it said? Follow him on Twitter @thebigm.

Rookie of the Year: The (New) iPad (3)
Previous Post

An Appreciation of Attention to Detail