On Friday, March 11th, Team Unwinnable took PAX East by storm and invaded the Boston Convention Center. We broke into squads and assaulted the showroom floor. Pete Lang, Ian Gonzales and Ken Lucas were scoping things out when we stumbled upon the Fantasy Flight Games booth. Ian seemed well versed in what FF had to offer and he led the team over. Their eyes locked onto something strangely familiar — Civilization: The Board Game.

Many moons ago, Ken was an RTS guy, having played the hell out of Starcraft and Age of Empires. By the time Civilization came out, his interest in the genre had dwindled. To date, he can’t recall whether he’s played one or two different versions of Civilization. Pete and Ian can’t even manage to finish a game of Stratego without taking a smoke break [EDITOR’S NOTE: As of this editing, Ian hasn’t had a cigarette in over a month. All hail healthy living!]

Fantasy Flight Games, a company known for its intricate and meticulous board games, recently got into the licensing business. The company that brought us games like Fury of Dracula and Arkham Horror now brings us board games based on properties like Battlestar Galactica and Game of Thrones. One such property is Sid Meier’s Civilization.

While perusing the booth, Team Unwinnable was invited to play the soon-to-be-released version of Civilization by one of the reps. Everyone sat down and assumed the role of an army. Ian controlled China, Pete, ironically, got Abraham Lincoln’s USA (he was wearing a John Wilkes Booth pin) and Ken became the red menace, Russia.

None of the team were really Civilization players, but they had a really good time going to war with each other in the middle of the convention center.

Based on the popular PC videogame series, Civilization is a turn-based strategy game. To quote Wikipedia on the latest game, “[i]n Civilization V, the player leads a civilization from prehistoric times into the future on a procedurally-generated map, achieving one of a number of different victory conditions through research, diplomacy, expansion, economic development, government and military conquest.”

The game, while owing a lot to Settlers of Catan and its numerous add-ons, drew them into its web of expansion, agriculture and violent conquest. There is a learning curve in the beginning since a lot of actions can happen through the numerous phases of one’s turn, but it seemed faithful to its video game counterpart. Civilization: The Board Game supports two to four players, so war can get out of hand. 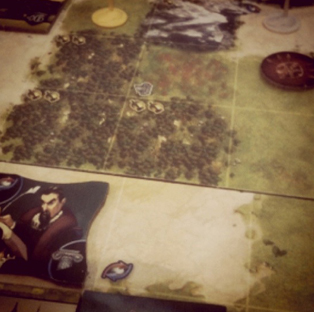 After about 30 minutes or so playtesting it, the team walked away enthused and ready to play again. The game is intricate, but not overly complicated. The game mechanics are fluid and organic. They translate the Sid Meier videogame to the tabletop quite well. The board is sectional so players can randomly generate a map. The PC game sucked up Unwinnable’s George Collazo into a string of Tea Party politics and nuclear Armageddon for several months and it could easily have drawn Pete, Ian and Ken into a similar affair of death and destruction.

It is definitely worth your time and hard-earned dollar.