I first met Dyad last year at PAX East, resting comfortably in the back of a crowded expo hall. I was drawn to it. In part, my attraction was due to the twisting cacophony of colors on display, but far more interesting was the cobbled-together throne that accompanied the game. I remember sitting down in the wooden and metal deathtrap, buckling the harnesses to secure myself in, and the developer handing me a waiver to sign in case the machine exploded or otherwise caused me bodily harm. Only after the waiver was back in the developer’s hand did they give me the PS3 controller, and I knew I was in for something special.

It was special, too. As I careened through the tunnels, the chair would tilt and twist with my on-screen movements. I wasn’t simply playing Dyad, I was feeling it. Every shift of the joystick reverberated through my whole body, making me a part of the game, part of its feedback loop. I played through three Zen-like levels and walked away in a far better mood than when I had arrived. Relaxed even, you could say, despite the Dyad machine’s borderline motion sickness and the swarming crowds of PAX.

I wondered how the experience could possibly translate to a version without the chair, and so I was overjoyed when a review code for Dyad appeared in my inbox recently. I immediately set aside time to play and prepared for the experience to follow. But as I progressed through Dyad’s levels, it quickly dawned on me that I was not enjoying myself. At all. Quite the opposite – the more of Dyad that I played, the more I wished I was instead playing nearly any other game.

The problem wasn’t that I was bad at Dyad, as I was consistently ranking highly on the leaderboards (which, admittedly, are not extensively populated during the pre-release review period). Was it the loss of the chair? Was the full-body feedback really so crucial to my initial enjoyment? I began talking with other writers about Dyad, mostly through Twitter, which prompted me to try and come up with a succinct way to describe my displeasure with a game so many others lauded.

And then the idea popped in my head: Dyad feels like work. I don’t know how the idea came to me, perhaps a lingering anxiety or two, but there it was. And the more I thought on it, the more it rang true. 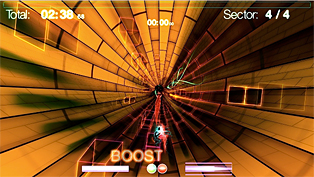 Earlier this year, I wrote about the nebulous anxieties and uncertainties that surround me in my daily routine of pitching articles and waiting for replies. I found the game Dwarfs!? to be the perfect antidote, because it allowed me to bring order to on-screen chaos, both through anticipation and reactive measures. Dyad is the opposite. With each boost from hooking enemies, lancing, creating zip lines or any of the far-too-many boosting methods, I found myself less in control, bringing more chaos to the screen rather than less.

As the game hurtles faster through psychedelic tubes, the colors begin to blur. Not just in the background, but the enemies and my aiming reticule as well. I can no longer tell what I am looking at on the screen, even though I can still sense the swirling chaos in front of me, swirling in the directions that I press. I want to stop. I don’t want to plunge blindly into the void, losing my senses as I vainly attempt to pilot my unclear blur of a ship past dozens of even less clear blurs.

I get enough of that every day, sending article pitches out, many never to be heard from again, as my mind blurs with hypotheticals as to why that might be. Should I keep sending pitches to that editor? Why haven’t I been paid for that invoice yet? Am I knowledgeable enough to tackle that subject for a pitch? Am I a good enough writer at all? Deeper and deeper I plunge into uncertainties that blur like Dyad’s trippy tubes. The game becomes an anxiety simulator, its psychedelic descent a perfect parallel to the cacophony of questions nagging inside my head.

Then there are the rules, with new ones added quite literally on every level so there is no time to become comfortable with any of them. You can hook this enemy, but this other enemy can cause zip lines to appear that make you go faster, and make sure to just barely graze each enemy as you pass to charge your lance meter, and press the square button to lance through lines of enemies at a speed that makes them even more of a blur, and watch out for blockers that halt your lancing but be on the lookout for lance boosters as well, and yes this is a massive run-on sentence because that is how the relentless, oppressive stacking of rules feels when I play it. Sure, I can stop my own progress in the game and practice a particular level to master a new rule before advancing, but that is missing the point. The experience of that level was already unpleasant. I want to move on in hopes of finding a point where the game actually clicks. 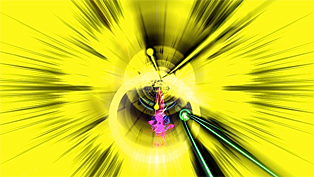 I pushed through it all though, 26 levels that comprise an oppressive tutorial to finally reach the game that I wanted to play. I knew it was there, or at least the infinity symbol at the bottom of Dyad’s level menu gave me hope that I would find something worthwhile at the end. I craved a more free-form tunnel to propel through, separated from the level goals, time limits and restrictions. The final level, “Eye of the Duck,” gave me exactly that, as the mechanics I had anxiously trudged through flowed naturally in the level’s endless tunnel. For the first time in Dyad, I felt like the tunnel was ascending rather than plunging into the abyss. I was back at PAX East in the Dyad death chair that first made me feel so alive.

Through the Eye of the Duck’s hypnotic kaleidoscope, I found the calm that Dyad had first given me. But with that calm came clarity of thought and a troubling realization: the damage had already been done. The breakneck slog through Dyad’s mechanics left it all feeling hollow. I no longer felt like I was piloting an audiovisual wonder – I was simply connecting enemies whose colors matched and boosting to achieve the high score and fastest time that the final level wasn’t even counting. And with that realization, the uncertainties followed. Had Dyad broken me, that I could no longer just experience it? Was that a fault on Dyad’s part or mine? The abyss loomed in front of me on the screen, asking me to press any button to continue. I did, and the very first level began again, unprompted. There was nothing more for it to offer, as if my own anxieties and questions of self-worth had rubbed off on Dyad. It had become uncertain, too, and was looping back on itself in an overly-eager attempt at self-justification. I already know where that path leads, of wallowing in anxieties, and it is not one I want or need to tread again.