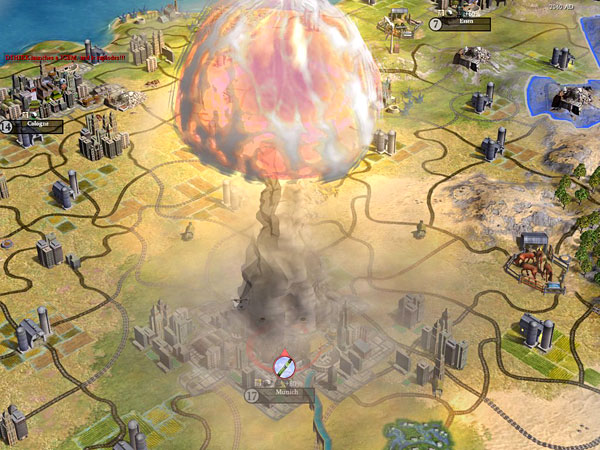 After the declarations of war, I completely changed my country into an industrial military complex. I shut down projects that would lead to civil benefit and made all my workers harvest the land for aluminum and other precious metals. Granted at this point in time there were no airplanes or advanced weaponry, I had to create a fleet of ironsides, and flood my borders with minutemen for protection.  The problem with so many military units in the game is the cost per round to maintain them, and then you have to build facilities to construct them. This meant the glorious surplus I had in money for those first few hundred years was turned into debt. And since I was at war, trade was not an option.

The only thing I could do was expand my borders in an effort to garner more resources. I began to purchase whatever free areas were around my cities.

An interesting thing about the concept of war in Civilization, which I felt mimicked war in the real world, was that it seemed to be kind of like buying insurance. I had every country declare war on me and yet there were no invasion forces other than a few squabbles at my border. I was maintaining a fleet and military force in an effort to prepare for the eventualities of conflict, but without use they became outdated very quickly – musket-men don’t fare well verses riflemen and so on.  Meanwhile the very real threat was still the occasional barbarian invasion either attacking a city or ransacking a seaport.

Extra! Extra! 1942 Ghandi, the Cutter from Calcutta, has the A-Bomb.

I was amazed. An enemy whom I had still to physically meet had developed a weapon of mass destruction and although his military was weak and the concept of him really being able to deliver it effectively wasn’t that much of a threat realistically, the threat loomed very realistically in my imagination.

I shifted my focus. I needed an A-bomb. No, I needed at least 5, one for every major city in India, and then a few more just in case any of his allies retaliated. Isolationism as a policy came crashing down and now the Tea Party faced the very real concept of globalization.

In an effort to decrease my debt and generate capital to build an atomic bomb, France was invaded once again. My goals were simple, a few outlying cities in the north of France had factories and resources such as gems and aluminum that would help me construct bombers and submarines to deliver the package. If Napoleon wanted a war, so be it. I threw down his punk card.

I named it “Operation Freedom Fries.” 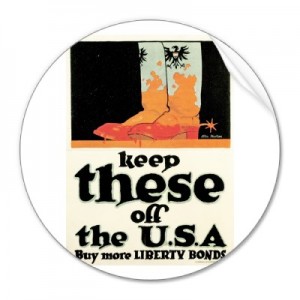 Taking the cities in northern France kind of felt like the liberation of the Alamo. Manifest destiny! My bank’s profit increased, I had attained valuable resources and I managed to kill off old military units that simply didn’t make sense anymore in the arms race, and that saved me a few bucks.

Conquered cities in the game, though, do not add to general happiness. I know. Even when you employ a puppet government.  In fact, it just added to the general disdain my population felt. An angry red emoticon signifying my general population scowled at me from the upper left hand corner. “What do you want from me people? I didn’t declare war! The countries of the world ganged up on me, and all I wanted to do was exist.”  The population didn’t answer back, just scowled, turn after turn.

As the next few decades progressed, I saw one country after another developing Manhattan Projects and also creating weapons such as mobile armored ground units and fighter jets, although Ramkhamhaeng, the leader of Siam, still enjoyed his mighty war elephants. With true Tea Party ideology, I refrained from developing too many public schools and universities, and therefore my science score was always dreadfully low making it more and more difficult to create new technology for warfare. Who would have thought you had to actually teach children in order for them to grow up to become scientist that developed new weapons needed for modern warfare.

This left me with one alternative if I hoped to win some sort of victory.  It was sink or swim time. I had to parasitically attack and ingest nation state after nation state and grab up their brilliant minds, their school facilities and factories. I waged full on war with France since I had effectively crippled them before and their army was in squalor. I then declared war on Alexander the Arrogant Tween ,and also, possibly my favorite Leader of all time, Otto Von Bismarck, the creator of RealPolitik.

It seemed like it was working. Each city that fell gave me a few more workers and a few more facilities to build weapons, and by attacking an enemy directly, I ensured his inability to advance his civilization in any effort to amass an army to battle mine. 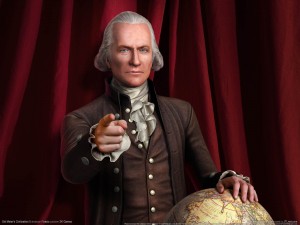 By the 1970’s, in game terms, I had conquered most of France. Alexander of Greece held out in a few areas, but he was faltering. Ghengis Khan pleaded for peace as I had beaten him back to a few cities, and Elizabeth of England was kneeling and ready to receive Washington’s cherry tree. Enemies on the outskirts of my map continued to be a threat, but because of my destabilizing presence a lot of them had begun to squabble with each other.

Over the next few years, I continued my aggressive foreign policy and used war profiteering to find resources and did so to such a good degree that I won the game by virtue of a science victory, which you get by launching a ship into space. It meant that I could annihilate any country in the world and therefore remove every threat. It was a very narrow victory and only through being cutthroat and enforcing my hegemony over the world was I able to accomplish this.

I won, but still the angry red face in the upper left hand corner stared back at me.