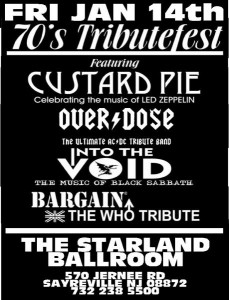 On Friday, January 14th, I attended the 70’s Tribute Fest at Starland Ballroom in Sayreville, New Jersey. Donned in my fondest satanic t-shirt and my warmest leather jacket, I braved the cold and corral-inspired cigarette breaks to witness a spectacle of 70’s rock revival. Walking into Starland, I felt more like I was at my cousin’s high school reunion than a rock show.

I’m in my late 30’s, but the crowd was filled with children of the 70’s. It was cool to see a crowd peppered with more adults than kids. Equally cool was seeing teens getting a taste of their parents’ anarchy themed rock ‘n’ roll. Even more, it was nice not to be in a rough crowd. I’m sure you all know that in certain settings you have to be on your guard so as not to get hurt. I often speak of a Ministry concert in Orlando as one of the roughest shows I’ve been to. I usually equate it to the feeling of having walked into Attica or Alcatraz as an inmate for the first time. It was a good feeling to let the guard down and enjoy a show with friends.

The Tribute Fest was kicked off with Bargain, a Who tribute band. They were OK – I’ve heard better. They came off more as a group of weekend warriors than a bunch of burnt out rock stars trying to relive the glory days. The highlight for me was at the end of their set when the lead singer was doing the Daltrey mic swing and actually lost control and bashed his mic into the ground. They had a decent set with classic songs like “Who are You”, “Baba O’Reily” and “Eminence Front.”

Round 2 brought out the Black Sabbath tribute band Into the Void. I’ve been listening to Sabbath since I was 13 and while I favored Led Zeppelin a little more at that time, Sabbath is one of the few bands that I listen to after all these years. Of all the tribute bands playing, I was only interested in hearing Sabbath. I felt like I walked through a time machine and was brought back to some fun (and not so fun) times of my teenage and young adult life. I was really impressed with ITV. If you closed your eyes, you would have thought you were seeing the real band live. The musicians were on point, but the lead singer drove home the complete Ozzy package. From the sound of his voice to the in between song banter, he captured the true essence of the Prince of Darkness. They had a great set, too, which featured radio friendly hits like “Iron Man” and “Paranoid” as well as fan favorites like “Children of the Grave”, “Fairies Wear Boots”, “Tomorrow’s Dream” and, of course, “Into the Void.”

The 3rd round featured Over/Dose, an AC/DC cover band. I’m not much of an AC/DC fan, so I wasn’t really paying much attention. I will say the guitarist was really good not just in his playing but in his representation of Angus Young. He had the trademark locks, the school uniform and the signature Gibson. The lead singer did a good job of capturing Bon Scott/Brian Johnson sound and spirit. Maybe he captured the spirit too much. It wasn’t his denim outfit complete with vintage AC/DC shirt, it was his ineptness due to an overage of alcohol consumption or, as the sign leading to the smoking section referenced, ‘Alchol’.

Finally the show closed with Custard Pie, the Led Zeppelin tribute. We were informed by the promoter that days before this show, the lead singer left the band. He called a friend from another Zep band and that guy got the flu. He got a last minute fill in from yet another band. I will say that I haven’t listened to Zeppelin since the early 90s. I wore out the heads on my Walkman listening to Zeppelin. I abused them and because of it, I don’t touch it anymore. I will say that back in the day I was a hardcore fan. I didn’t just have albums, I had live shows, rare vinyl and bootleg videos. I consider myself an expert on the subject even though they have not graced any sound system of mine since 1993. That being said, I have to admit that this band really rocked. The lead singer sounded like 1975 era Robert Plant and looked like him, to boot. He had the wavy hair and goatee and the mannerisms. For me, that seals the deal between an OK cover band and an all-out tribute band. The band mates were equally talented. The guitarist emulated Jimmy Page with the violin bow on “Dazed and Confused” and even played a Theremin (although I might have been the only one who knew what he was playing). The drummer emulated the late John Bonham during “Moby Dick” by playing with his hands. The bass player channeled John Paul Jones with his well plucked bass lines. For a band cobbled together in the 11the hour, they seemed as if they had played for years. I have to give high marks to them for playing a great mix of heavy hitters and less played anthems. They also followed the cardinal rule of the music store in Wayne’s World as there was no “Stairway” present.

If you’re a fan of these bands or you want to take a walk back down memory lane, I would suggest checking out the 70’s Tributefest. They will be performing Tributefest 7 at Crossroads in Garwood, New Jersey on February 26th.

AC/DC, Bargain, Black Sabbath, Into the Void, Over/Dose, The Who, Tributefest

A Seven-Year-Old’s Taste in Music