“Perhaps the rogue and I should be the ones to jump on Magmaw’s back. Then we can throw the chains around that spike on the ground and see if we can impale the lava worm on it. We’ll hold it there for as long as we can while the rest of you slice him open!”

I stare at the time in disbelief. “Oh right. I guess we’ll stop there. We’ll kill it tomorrow night.”

I frequently wonder why I’m so drawn to MMOs. I’ve been playing video games my entire life, yet for the past several years this relatively new genre is dominating my videogame time. It could be that as a longtime player of Dungeons & Dragons there is a certain appeal to creating a single character and investing a lot of time leveling, gearing and improving it. MMOs are open-ended, and new content is frequently introduced so your character lives on beyond the expectancy of other games. So while other games measure their play time in hours, MMOs are measured in days. There’s an emotional tie that develops between you and your avatar that is perhaps more difficult to achieve in other games that end at the 20 – 30 hour mark.

There’s also the side of me that is attracted to in-game achievements and collections. MMOs are notorious for littering their games with rare pets, mounts and vanity items that are highly sought after by players as trophies. Achievements are unlocked for accomplishing extremely difficult or tedious goals. What makes it even more addicting is the fact that in many of these games your achievements are announced or shown on your character’s profile so you can garner accolades from your friends. I think I would be more productive around the house if completing a task instantly notified my wife wherever she was. 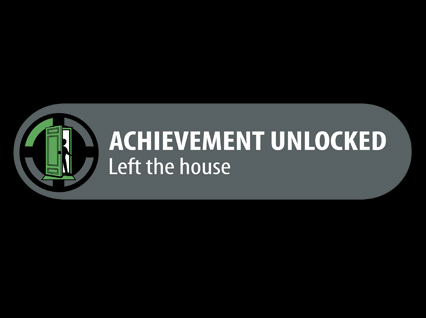 DING! Richie has just earned the Ring Around the Collar achievement for completing five loads of laundry within 24 hours!

Another reason I’m hooked on MMOs is the social aspect. Many of my real-life friends and family play these games with me. Though we live in different states or our responsibilities keep us from seeing each other as often as we’d like, we actually interact on an almost daily basis. My dad plays World of Warcraft. He’s in his sixties and yet each night he’s leading the charge against the biggest bad ass monsters as his night elf warrior, Vanquish. Because of WoW, I talk to my dad every day and that’s pretty awesome. I’d also be remiss if I didn’t mention the numerous friendships I’ve made online. You can truly have a blast and develop real friendships with folks you’ve never met.  The social

experience of MMOs is the closest I’ve come to the golden days of pen-and-paper roleplaying.  Instead of crowding around a dice-filled dining room table eating pizza and Doritos, we’re sitting in the comfort of our own homes with headsets on.

I think the reasons I’ve stated all contribute to why I love playing MMOs. However, there is one final aspect that I believe seals the deal. As with most addictions, there is a feeling you crave, a rush. The rush I seek involves raiding. Many MMOs have a leveling up process (aka “the grind”), and once you achieve the maximum level allowed you continue playing the endgame content. For some, the endgame is player vs. player combat. For others, it’s raiding. Raiding is best described as a group of players who team up to tackle the game’s most difficult challenges. Different games might have different names for raiding, but the point is these are challenges must be done with an organized team of individuals. The number of players varies, but it’s typical to see raids of 8 – 25 players. These players all have various roles to perform in the encounters you face. You coordinate via voice chat and through the course of an evening you typically die more than you succeed. The goal is to enter dungeons, take out the big boss creatures and get their fabulous loot.

Let’s look at a quick example:

One of the first bosses you face in World of Warcraft’s recent expansion, Cataclysm, is a giant lava worm named Magmaw. During the fight it will pick one member of your raid and use an ability called Lava Pillar on them. Players have just seconds to run out of the area before a column of fire erupts beneath them. The fire leaves behind a writhing mass of lava parasites which will now chase players around. If they catch anyone, they will do what parasites do: attach to the character and breed more parasites. Yum! So players need to kill these creepy little buggers quickly and from range.

Magmaw will periodically lower its head and begin to mangle your group’s tank (tanks are basically heavily armored meat shields). After a few seconds, the worm will attempt to swallow the tank whole and this is when the healers in the group need to fire their most powerful spells to keep him or her alive.

While Magmaw’s head is lowered, two players can actually scale up its exposed back. Their job is to use chains to lasso a spike located in the room. If they do it simultaneously, this gigantic worm will be skewered on the spike, leaving it defenseless for a short time. While the beast is impaled, it cannot perform any of its abilities and all damage done to it is doubled. So in summary, this fight has parasites, swallowing and impaling . . . sounds like a late night movie on Cinemax!

So that’s the very basic strategy of just one boss in one dungeon. Even if everyone knows the game plan, it takes practice to learn the fight and execute the strategy. It’s very common to wipe (die) on a boss all night long the very first time you attempt it. Some of the more difficult encounters can take several weeks of raiding (3 – 4 nights per week) to eventually overcome. 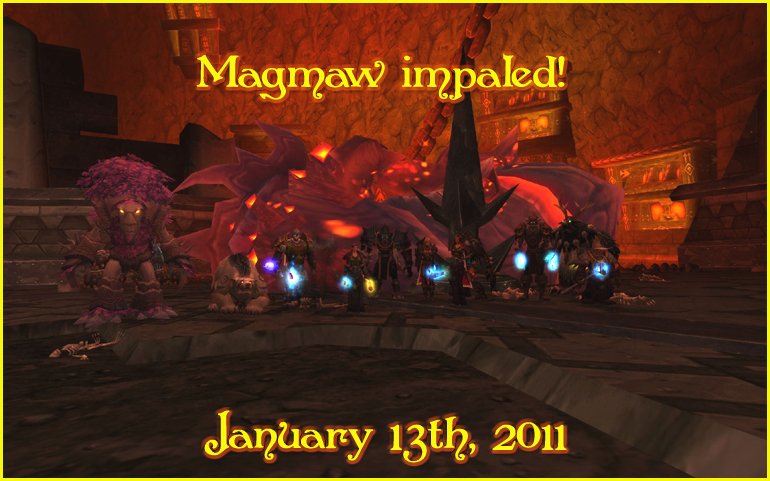 While dying over and over again can be frustrating, it’s this challenge and working with a team towards a common goal that elicits a rush. When a new boss is finally defeated, you get an adrenaline rush equivalent to winning a team sport such as soccer or baseball. It’s unlike any other gaming experience I’ve encountered. Everyone screams into their headsets, there’s fist pumping and afterwards a general sense of relief.  After the initial shock of the fresh kill wears off, a screenshot is usually taken with your raid posing in front of a monstrous corpse. Finally, there’s loot to be had:  epic arms and armaments to distribute to the raid members as testament of their triumph.

The luring siren song of MMOs has this gamer firmly entranced. However, rather than needing a 12-step program, I applaud the genre for providing a unique and varied gaming experience. Whether you’re a collector, a roleplayer, a completionist, a socialite or a thrill-seeker, MMOs can scratch your gamer’s itch.

DING! Richie has just earned the In The Doghouse achievement for allowing the dinner his wife slaved over to get cold!