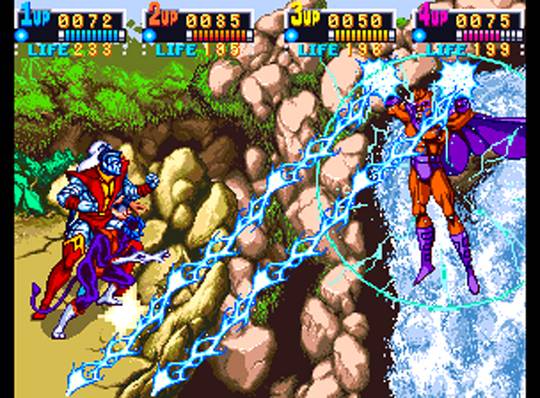 Last week, Charles Moran and I took on our secret identities of Colossus and Nightcrawler in order to stop the evil mutant known as Magneto!

You’re probably asking how we could possibly take on the Master of Magnetism himself, right? Well, the classic Konami 1992 arcade brawler, X-Men, is now available on Xbox Live.

In the game, players can choose up to six of the X-Men and play a party co-op game. The playable characters are Cyclops, Storm, Wolverine, Colossus, Nightcrawler and Dazzler. This is arguably the best team of X-Men one could ever hope for!

You can play a multiplayer game either online or locally. Regardless, if you have a stable online connection, you can have an awesome X-Men party in you pajamas. At least, that’s what I was wearing when I played the game. If I’m going to save a world that fears and hates me, I may as well be comfortable, right? 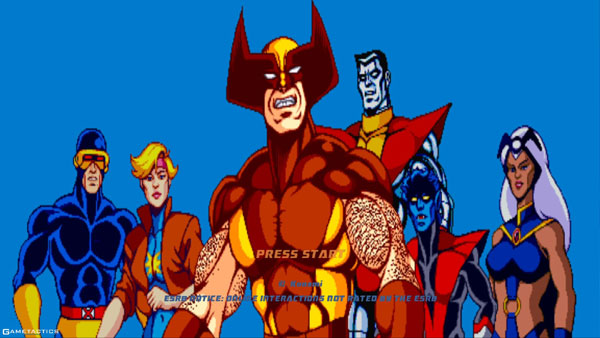 So, Chuck and I selected our characters and proceeded to battle Magneto’s Brotherhood of Evil Mutants.

“Woah dude,” I said. “The Sentinels got small!”

“There are a lot of them. I wonder what my mutant power is,” Chuck said.

Colossus proceeded to stretch out his arms, revert to unarmored, human mode and unleash a torrent of energy that took out every Sentinel on the screen.

We moved a little further ahead. I remembered Nightcrawler’s power. It was the same in the old PC and Sega Genesis X-Men games.

We walked a few city blocks until we came a cross a gaggle of Sentinels. I unleashed Nightcrawler’s power!

“Whoa, look at you zip around there,” remarked Chuck.

“Ja! I can use my latent teleportation powers on offense, mein Freund.” 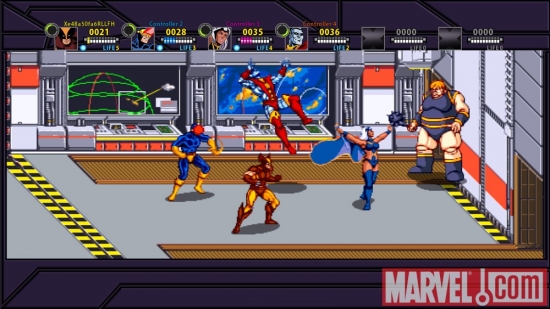 Audio over Xbox Live isn’t so great, but I’m pretty sure Chuck grumbled at my bad German accent.

Speaking of bad accents, we came across our first miniboss, Pyro!

We quickly dispatched the unambiguously fire themed Australian and wound up entering a Sentinel factory right in the middle of town.

At one point in the factory, we came across a miniboss we didn’t recognize.

“Ahab? From Days of Future Present? Master Mold?” I really wasn’t sure

After some research, I discovered it was Nimrod, a Sentinel from the future. Maybe he was doing some Terminator-like stuff, attempting to change the time stream? I’ve heard of weirder stuff in X-Men comics, so we’ll just go with that.

The game’s story is about as nonsensical as most X-Men comics out there. In fact, the story even has the globetrotting melodrama that the X-Men are known for.

After clearing the midtown Sentinel factory, Professor X appears in the X-Men’s minds to let them know Magneto kidnapped him and Kitty Pryde. The Professor then implores the X-Men to save him on Island M.

While battling through the strange lizard and plant creatures that populated Island M, Colossus fell in battle. Storm replaced him.

She punched and kicked some Sentinels, and her mutant power wasn’t as effective as we’d hoped.

I couldn’t disagree with Chuck.

So, Storm sacrificed herself, taking blasts from the purple and green Sentinels and finally, Colossus returned. Just in time, too, because Nightcrawler went down!

The thing that’s cool about the game is players can switch which X-Man they want to play during the game. Dazzler’s laser light show not doing it for you? Switch to Wolverine and shred some Sentinel! Colossus lumber a little too much for your tastes? Switch off to Nightcrawler and hop around the screen.

As the game continued, the following phrases were uttered by us as we got in to full-on brawler smack talking mode!

“Magneto really should just own Colossus. Why don’t they do that?”

“Those Sentinels must be the new Stark Model. Sellout.”

This game is a flawless portal to the classic game of my youth. Battling through the villains felt like putting on my new cashmere-lined leather gloves – perfect. It’s full of nods to the X-Men’s frankly ridiculous history and it provides a good solid hour of fun. There’s even a scene where Xavier tells you to save Kitty, so you do only to have her tell you to save the Professor. It’s insane! Heck, when we finished the game, Chuck and I just went to play through it again for about half the game. It is that much fun.

It costs about $10.00 and is completely worth it. You and your pals will have a blast! 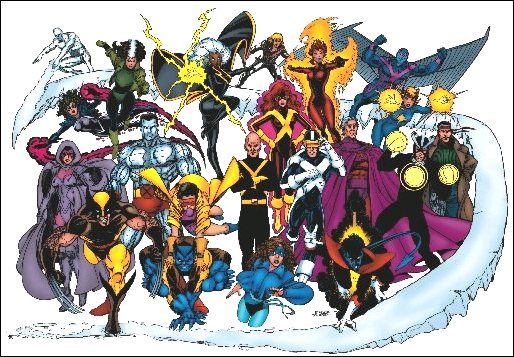