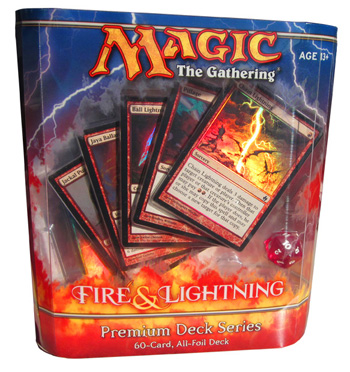 Last December, in “An Unwinnable Letter to Santa”, I asked Santa for the new Magic the Gathering Premium Deck Series: Fire & Lightning set. Well apparently I wasn’t as good a boy as I had thought and I did not find it under my tree on Christmas Day.

Thanks for nothing Santa.

This was just fine because I am after all a thirty-one year old man with a job so last Sunday I went down to my local game shop and bought it myself (you gotta treat yourself right).


I may be late to the party on this but the Fire & Lightning Deck is everything I had hoped it would be in a pre-constructed “burn” deck. It’s fast and mean and really doesn’t leave a lot of wiggle room for over thinking your turn. It is filled to the teeth with direct damage instants (Lightning Bolt, Flames of the Blood Hand) and creatures that are meant to get in, do quick damage and get sacrificed (Ball Lightning, Spark Elemental). All the cards play well off each other and they mostly have low casting costs, (18 of the creatures and 13 of the spells can be cast for one to three mana) so if you’ve got three lands on the table you are sitting pretty and more than likely have already done significant damage to your opponent.

I spent the majority of my Monday evening play testing this deck to see if it could hold up against my friend’s Standard, Extended and Vintage Constructed decks and I was pleasantly surprised. I took out a Black/Blue Vintage Creature Destruction deck in five turns and then later skated by a Blue/White Standard Myr deck with relative ease. However, in my third game versus a Red/Black Vintage Elemental I began to see the deck’s shortcomings.

The Fire & Lightning deck is in a lot of ways like a gunfighter in the old west, quick on the draw but there is always somebody faster. Two Dark Rituals later and I found myself over taken by creatures with haste after I had blown through all the direct damage spells in my hand. On the next turn, Trample finished me off by powering through my Mogg Fanatic and Vulshok Sorcerer. 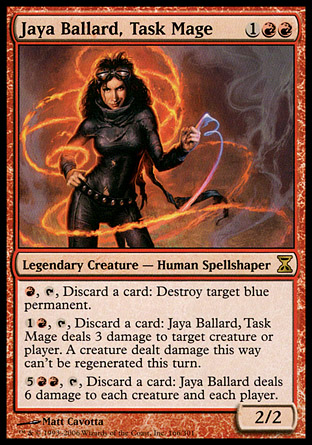 The Fire & Lightning deck didn’t fare too well in a Chaos game either but was fun to play and it did rain on the collective parades of multiple opponents. Fireball is a quick way to deal damage to multiple targets and Price of Progress is extremely helpful when dealing with those who favor non-basic lands in their decks as it will deal “damage equal to twice the number of non-basic lands that player controls.”

My personal favorite was Jaya Ballard, Task Mage because if you’ve got seven mana and a card to discard you can deal 6 damage to each creature and each player which is worth the damage if you can re-level the playing field.

Whether you keep it intact or break it up for use in other decks I would say The Premium Deck Series: Fire & Lightning is absolutely worth the money. It is really fun to play and would make a great gift for any friend who plays Magic The Gathering. I look forward to hearing the collective groans of my friends when I burn the hell out of their decks.

The Cruel Tutelage of Pat Morita, or: How I Learned To Play Magic the Gathering.