It’s a shame too, as Green Lantern is a limitless property for anyone with a shred of imagination. Unfortunately, Warner Brothers Games gave the most powerful weapon in the universe to game developers bereft of imagination and they used it to construct a God of War clone. The gameplay is repetitive, the camera is clunky and the limited number of flying levels hinders what could be a fun beat ‘em up.

One of the problems facing so many monotonous foes is figuring out where they’re coming from. Control of a camera would help with that, right? Tough luck, poozer! The occasional surprise attack from some of the more powerful Manhunters is infuriating. Is Warner Brothers Games recruiting for the Red Lantern Corps? 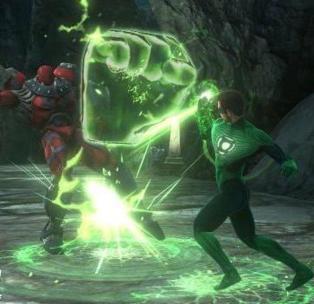 Hal Jordan, the main character, is a pilot and he barely ever flies in the game. The few times he does, it’s in lame on-rail missions (the first of which is VERY reminiscent of the Death Star run in Return of the Jedi). I know it’s a licensed game, but come on guys – this is Green Lantern! Hal is fearless! He doesn’t do on-rail, he’s a fucking test pilot!

As for creativity, Hal runs around using his ring to smash Manhunters, and then Zamaron warriors, then more Manhunters over and over and over again for six to seven hours. There is the occasional puzzle, but if it takes you too long to figure out (i.e., less than a minute) the game gives you a “hint” that’s so obvious a 6-year-old would be insulted. If not for the game’s story, Rise of the Manhunters would remind me of Lenny from Multiplicity. 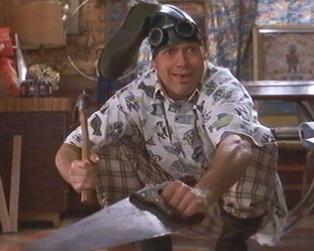 The game’s story will draw in Green Lantern fans. It’s a blast for Green Lantern fans, even if the Manhunters seem like Sentinel rip-offs from time to time. Fighting your way through Oa, Zamaron and other planets central to the Green Lantern mythos is a lot of fun. I liked visiting different worlds and discovering new ring constructs like the baseball bat and the mace.

Another fun aspect of the game is the co-op feature. Player One is Hal Jordan and Player Two is Sinestro. The two Green Lanterns slug it out with their evil robotic counterparts and wind up making this game feel like a classic beat ‘em up (ala Konami’s X-Men or Teenage Mutant Ninja Turtles arcade games). Unfortunately, all the cinema scenes in the co-op are the same as the scenes in the single player.

Green Lantern: Rise of the Manhunters is just another licensed game. It’s better than some, but it’s just an unimaginative God of War clone. Dust off your PlayStation 2 and play that game instead, or snag Star Wars: The Force Unleashed – they’re both better games and a lot cheaper than Rise of the Manhunters’ $59.99 price tag. If you’re a die-hard Green Lantern fan and just have to have it, save some scratch and wait until it’s twenty bucks.

Green Lantern: Rise of the Manhunters