X-Men Destiny is an X-Men game where you don’t play as the X-Men. Instead, you choose from one of three new characters: the “Purifier” (read: Nazi) with daddy issues, the young Japanese girl with abandonment issues or the high school football player with apathy issues (he brings a football to the historic mutant-human peace accord rally that opens the game). They’ll grow over the course of their adventure, of course, because that’s what happens when you’re a teenager in an X-Men story. It’s all a sexless metaphor for puberty and hormones and…

Well, actually, that’s probably what would have happened had the game narrative not been a series of barely-strung-together cutscenes. What feels a little stilted on your first playthrough turns out to be obviously stitched together on your second. Asides specific to your chosen mutant are placed in the midst of long-winded lectures on the importance of your choices, the actors’ awkward pauses all the more obvious because you know what Cyclops (voiced by Nolan North!) or Magneto (not voiced by Sir Ian McKellen!) is going to say next.

It’s all a sexless metaphor for puberty and hormones

You see, even though the game’s subtitle is “Destiny,” all the characters you interact with (be they X-Men or the Brotherhood) really want you to know that your choices matter. I’m pretty sure at least one character tells you that you make your own destiny. And you do make plenty of choices.

You choose a character. You choose a power set: obsidian skin, energy projection, dark matter control. The two aren’t linked; any of the three characters can have any of the three sets. These mutant powers aren’t a literalized metaphor for their personalities, they’re three move sets. You also collect X-Genes that affect your offense, defense and “utility” (movement, health, ability points, etc). They’re tied to particular mutants, but there’s not much practical difference, really, between your attacks causing fire damage (Pyro) or “light” damage (North Star).

You also pick up “suits” of various characters throughout the game. These are primarily cosmetic. They’re palette swaps, really; the Emma Frost costume, for example, does not put the burly football player in the gravity-defying tube top and spandex pants that Frost wears (“yes, she does dress like that!” her unlocked character profile states). If you equip the suit, offense, defense and utility X-Genes all from the same mutant, you can activate “X-Mode”, which enhances the X-Gene abilities. Later on, the manufacturing of mutant abilities becomes part of the plot, but don’t worry, no one will point out that your mutant is doing the exact same thing the bad guys are doing.

So, lots of choices in the mechanics. The problem is, well, they don’t seem to make all that much of a difference in your play. It’s like you’ve been given the choice of anything in an elaborate toolbox, and then told to hang about a thousand picture frames: you might try using a wrench or a screwdriver to pound the nails in, but as soon as you figure out the hammer, you won’t really see a need to switch.

But there are also plenty of binary narrative choices, where you’re given the option to side with the Brotherhood or the X-Men, which will move your “faction” slider toward one or the other. Too far on one side and it seemed like mutants on the other team wouldn’t offer you sidequests, but honestly, there were so many little issues with the game that it’s just as likely a glitch caused the sidequest prompt not to trigger. 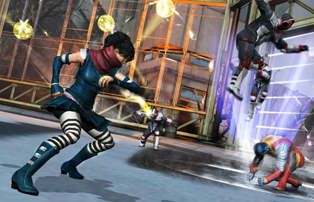 The first time I met Wolverine, he had no claws.  At one point, Forge (I think) says to my lone mutant: “Don’t risk your lives.” Note the plural “lives.” As I was not some cat-mutant, I assume this was leftover from a possible co-op option. Near the end of my second playthrough, the football player quipped something about an enemy in a cutscene, but the subtitles were for what the Purifier said in the same scene in my first playthrough.

I completed this game twice. Twice. And even then, I was still thrown off by the occasional objective that involved destroying turrets or some other static object instead of just surviving waves of enemies. Whenever text would pop up in the game world to let me know how many enemies were left, or to indicate an ASTONISHING COMBO, I smashed them for extra experience points to level up my powers and my X-Genes. I fought alongside Pyro twice, as he shouted for me to “throw [him] another shrimp for the Barbie [sic]”. It was not unlike fighting aside Daniel Feldspar, a stereotypically Australian dragon.

So you spend the entire game beating up dudes and earning faction with either the X-Men or the Brotherhood. And then, before the final chapter, you’re given the choice of which one to side with. It doesn’t matter if you’ve got full X-Men faction, you can still choose the Brotherhood, and vice versa. It fits with the X-Men universe, where alliances shift and characters swap sides rather frequently; it’s jarring in a videogame, though, to be told right before the end that all those choices you made, that slider you nudged one way or the other, had no bearing on this final choice. All your choices are discrete events, no matter what video games and morality sliders have conditioned you to think. You can have a last-minute redemption or fall from grace.

But the two paths leading to and from that point are so similar that the only noticeable difference between the two is whether your final battle cutscene focuses on Nolan Northclops or Magnot-Sir-Ian-McKellen-o, and which of those two congratulates you on achieving their group’s goals.

There might be something in Destiny, something about our choices and whether they mean anything or not, whether the fault lies in our stars or in ourselves. Maybe the takeaway is that people tell us we can choose, that we can make our own destiny, but in the end it’s already planned out for us. That we just pound nails using a crescent wrench because we got bored with the hammer’s efficiency. Twice.

I played this game twice!

Rating: Two out of Five Pies

Brian Taylor’s follower-tweet ratio is nearly 1:40. Follow him @BrianMTaylor. X-Men Destiny, from Activision, is available on PlayStation 3, Wii and Xbox 360.