She stared back at me, her green case still new and shiny though her plastic wrap lay crumpled at the foot of my couch. I should have known something was up when I opened the case and the booklet was one page long. I remember the previous night in flashes.

No actually, it began with an instant message earlier that afternoon. My friend messaged, “Hey, you want to go to a midnight release?”  I replied, “Well, I dunno. Lemme think about it.”

I thought: I have been good this month. I haven’t spent irresponsibly. I have no outstanding debts. I am a great guy – yes, I deserve this!

I messaged back, “Count me in.”

As the afternoon wore on the anticipation began to set in. This is going to be a great game. Every other game to come out in the past few months has been horrible: Fable 3 was a very successful experiment in exactly how boring and tedious a game can be, Force Unleashed 2 was a watered-down redo of a watered-down redo and Fallout New Vegas was the equivalent of a high school valedictorian getting into a drunken accident on prom night and having to deliver her valedictory speech from the cold steel prison of a wheelchair.

Eff that!  Assassins Creed: Brotherhood was going to be the bee’s knees.

But when we arrived at the store, there was something odd about the parking lot. The first kids in line were wearing Ezio-style white hoodies and a fat man was standing awkwardly close behind them, attempting to spark up uneasy conversations and perhaps looking to not only buy a game but also find a true friend to play it with. Then there was us and that was it.

Perusing the parking lot, everyone else sat in their cars; some with the dome lights on quietly reading, some lit by their smart phones. I reminisced about the Grand Theft Auto IV midnight release and how lines had stretched around the entire promenade.

I should have suspected something was amiss waiting in that line.

The door opened a few minutes before midnight and the manager lazily let us in. We bought our games without fanfare and went home. 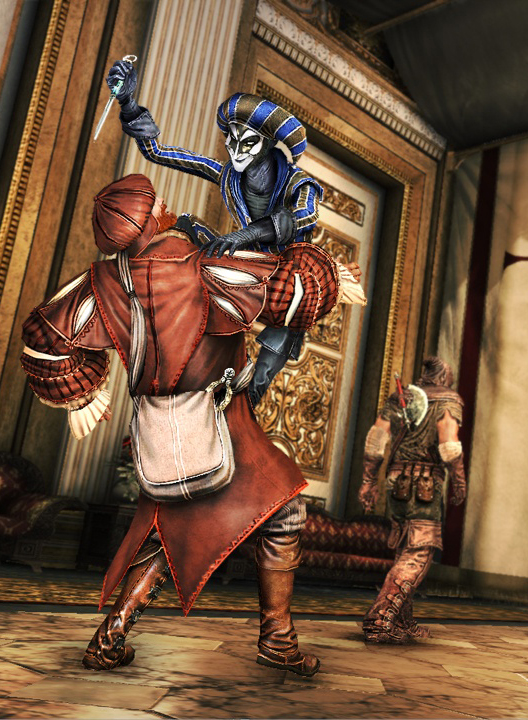 When I got there, my beer goggles haze had fully set in. I sat on the empty couch, turned on my Xbox and placed the game in the tray. I was so going to get my game on. The dashboard loaded up and I diligently loaded my game onto the hard drive (I know firsthand the horrors of a red ring and how waking up to angry red eyes staring back at you is an awful feeling).

The fun began, I started the game in story mode and halfway around the loading of the game, my friend hit me up for multiplayer. I logged into the waiting room and got excited. And then…

Walking. Sure, I’m dressed as a creepy doctor and it looks amazing, but I’m just walking. I feel like I must be playing it wrong, but everybody else is walking. Hey, I just saw a guy jump on a rooftop and now he’s walking too.

The game tells me to hit the X button when I get close to my target and a compass gives me a very rough idea of where he is, so I walk with the crowd, meandering vaguely, kind of like an Alzheimer’s patient in a busy mall. Sure, I can hit the A button and assume a quicker stride but really, the difference between hitting A and not hitting A is the difference between watching paint dry and, well, watching paint dry, except when you hit A, you alert enemies to your presence. There is no practical reason to include the button in the controls.

When I find my target, I walk up to him and hit the X button. The screen flashes to a two-second animation of me killing him. No conflict. Just animation.

They should have named the game Assassins Creed 2: Pedestrian Edition.

Picking up that wrapper that next morning, I felt like a girl putting her panties in her purse and doing the walk of shame.