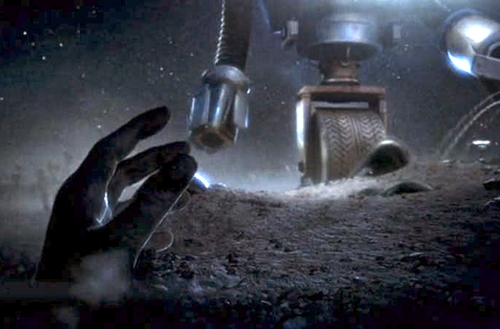 It was around the time I got shot in the face that I got to reflecting about my life.

See, I did some bad things back east, things I might not be too proud of, things that had me going out west to get clear of. I think the bullet the man in the checkered suit fired through my brain was the period at the end of a long sentence telling me to change my ways.

So I did. I guess being buried in a shallow grave will do that to man.

I recovered quickly, all things considered. I had it in mind to catch up with the man in the checkered suit and have some stern words with him about his use of firearms, but I resolved to help as many people along the way as I could.

That first week, I stuck close to Goodsprings while I got myself back up to snuff and I helped those folks plenty while I did. Ran some errands and sorted out some raiders for them. By the time I was ready to head south, I got to feeling like I maybe made a difference in these foks lives. It felt good.

I was advised to keep to the road, but I opted to cautiously explore the hills instead. Hold on a second, I seem to be stuck inside a boulder.

I was advised to keep to the road, but I opted to cautiously explore the hills instead. I made slow progress on account of being so careful. Having been shot in the face, I was now inclined to solving problems from a distance, courtesy of an old bolt action rifle I took to calling Lucretia.

I did some more good things and I eventually got a lead on the man in the checkered suit: he was headed to Novac by way of a party town named Nipton. I hurried right off after him.

What I found in Nipton, it wasn’t right. Regular folks strung up, crucified…piles of burning corpses…

Some scum calling themselves Caesar’s Legion were behind it. Slavers and raiders. Their leader, a vile man named Vulpes Inculta, told me that the town was nothing but a den of degenerates and that he and his men had moral obligation to torture and murder the inhabitants. I told him – wait, why can’t I talk?

I told him he was a monster and his response was that, if I felt that strongly about it, I could feel free to kill him and his men. I obliged him and shot him in the face.

I know there is something like irony at play there. I know that what I did probably makes me no better than him. But it made me feel better anyway.

I left Nipton behind and pushed east into the hills, where the rest of the Legionnaires had a slave camp. It was my intention to wipe out the Legion, free the slaves and continue on my way Novac. The Legion was over confident and that made them easy to track.

Hey, five guys just appeared right in front of me! And they have automatic weapons? What do they mean Caesar has marked me for death? I didn’t leave any survivors so Caesar can’t possibly know!

The Legion was over confident and that made them easy to track.

Wait, those guys are back again. How do they keep appearing out of thin air? And wow, those automatic weapons work fast.

The Legion was over confident and that made them easy to track.

Ugh, the assassins again. Doesn’t the game realize that I am a stealth based sniper? How the hell am I supposed to deal with five heavily armed and armored assailants who materialize directly in front of me?

Sometimes, the hero dies in the wasteland.

Credit where credit is due: aside of my own experiences with Fallout: New Vegas, this piece was also inspired by a Ready for the Weekend entry from Unwinnable contributor George Collazo, in which he described his intentions for the game as though it were real life. It was rather funny and ripe for ripping off. Thanks George!