Lucasfilm announced the release of the Star Wars Saga Blu-ray boxed set at Star Wars Celebration V in Orlando, Florida last weekend.  To commemorate the announcement, they unveiled a long lost scene from Return of the Jedi.

In what was supposed to be Luke Skywalker’s introduction in the film, we see Darth Vader in his chamber, using the Force to taunt and tempt his son. The scene moves to a hooded Luke Skywalker who is draped in shadow and putting the final touches on his lightsaber as his dark father beckons. When Luke ignites his green blade, we see that he’s in Obi-Wan Kenobi’s old hut and the droids are waiting outside.

The crowd at Celebration V loved every second. Me, on the other hand…I’m not sure what to think.

One of my earliest memories as a child is the night I went to see Return of the Jedi.

My father took me to see it at a movie theater in the Bloomfield, NJ. I was two months away from turning four. I remember walking past the box office, up two red tiled steps towards the concession stand and getting a juice while my dad got a soda. There was a contest running at the time;  if you matched three images on the bottom of a soda cup, you won an action figure of that character. My dad let me tear the bottom off of his large Coca Cola and I won an A-Wing pilot before I even saw the movie. Pretty sweet, right? We walked into the theater, took our seats and waited for the final chapter in the Star Wars Trilogy.

At this point in time, Star Wars was the most successful film franchise in history and it was coming to an end. There were toys, novelizations, Burger King cups – you name it. Star Wars was big business.  At the time, most movie theaters were independently run operations, not the AMC’s or even the Clearview Cinemas we know today. These theaters averaged about three to four screens, not the 16 or more we’re accustomed to now. The movies were a place where small business and big business worked together for quite a long time and Star Wars was massive part of both their bottom lines.

One cost concern for the theater owners was running time and Return of the Jedi ran pretty long, just over two hours. In order to maximize profit, the theaters needed it to be as short as possible so they could fit as many screening as possible into a single night. Knowing this, the editors went through the film during post production and cut what they could to minimize the running time, therefore maximizing not only the studio’s profits, but the profits of the theater owners.

Of course, I knew none of this at just shy of four years old.

While waiting for the movie to start, I saw a kid about my age sitting in front of me. He was just as excited as I was. He turned around and we jabbered on about the movie we were about to see. He mentioned his brother read the novelization and told me that it 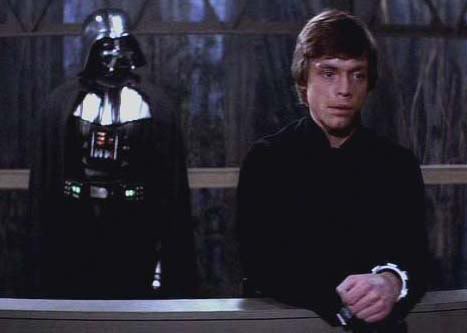 was the greatest story he’d ever heard. He shared a bit with me, like the Emperor taunting Luke, the rescue of Han Solo and Luke building a lightsaber at Obi-Wan’s house. The lights dimmed and we shut our traps and got ready, for the greatest two hours of our lives. What I wanted was the greatest ending ever written. What I got was a story about friendship and the relationship between fathers and sons.

Aside from that bit about Luke at Obi-Wan’s house, the movie was as awesome as the kid made it sound. I asked my dad why that scene wasn’t in the movie and he said the kid was probably fibbing. That answer was good enough for me, he was my dad after all and he knew best. Besides, I was amped for the movie so much that I wanted to see it again right away. My father told me maybe next week, but I could get a comic tomorrow. The next day, I made my father bring me to 7-11 where I bought the Marvel Comics adaptation, Return of the Jedi #4. It’s the first comic book I remember buying.

In the early 1980s, the Internet didn’t exist, the home video market consisted of mostly rentals and bootlegs were only found in Chinatown (and they were always crap quality). So, if you wanted to relive the movie at home, you had two choices: read the comic adaptation or read the novelization. I couldn’t read yet, so I went with the comic and the comics that continued the adventures of the Star Warriors.  After the initial joy of getting to see these characters again, I grew disinterested very quickly. The comics were fun, but they were missing something, something I couldn’t articulate at the age of four.  The stakes were considerably less in the post Return of the Jedi comics than they were in the films.  They were missing the conflict between Luke Skywalker and Darth Vader.

Thanks to the Internet, shortly after Lucasfilm unveiled the previously deleted scene, it wound up on YouTube. Naturally, I watched it. Initially, I thought it was just going to be an inconsequential clip of Luke tinkering with his new weapon and that’s it. I was wrong. What struck me most about the scene as a 31 year old man wasn’t that it was a scene from Return of the Jedi I’d never seen before, but that the scene considerably raised the stakes in Luke and Vader’s relationship. Furthermore, this scene, with music and completed effects, was cut for no other reason than money and now it’s unveiled to millions of Star Wars fans to promote yet another collection of the Star Wars films.

I look at this scene and think back to my own fallible father, telling me this kid was probably lying. That’s the thing about Return of the Jedi, it’s about fathers and sons. What 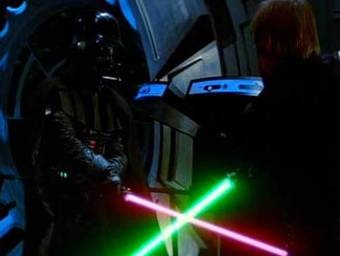 always fascinated me about this movie (subconsciously at first) was the relationship between Luke and Vader. It was the polar opposite of my own relationship with my dad. He took me to the movies, snuck me comics and took me crabbing with my Uncle. Luke and Vader? They tried to kill each other every chance they got! This deleted scene added layers of depth to Luke Skywalker and Darth Vader we hadn’t seen before.

In the scene, we see that Darth Vader has been forcing his thoughts into Luke’s head since the end of The Empire Strikes Back. That’s a considerable amount of time (an entire year, according to the official chronology). While his dark father intrudes on Luke’s mind, he is still able to construct a new lightsaber, get used to his new robot hand and formulate a plan to save his best friend from the clutches of vile gangster, Jabba the Hutt! Imagine having an evil version of your dad telling you what to do via telepathy. Seriously, think about that for a minute. Could you work under those conditions?  Luke could.

The thing that gets me is, yes, movies were and (now more than ever) are a business. Yet, here’s a one minute scene that elevates the stakes of the story’s entire structure and its impact on the two main characters left on the cutting room floor. Why? So the proprietors could sell more product.

Now it’s back for what reason? So the proprietors can sell more product. It’s a harsh lesson in the rules of art and commerce and it leaves me with a bad feeling.

Then I think about that darkened movie theater and how amused my own father was after we saw the movie. Star Wars Inc. can take my money, but they can’t take that.