This is a story about the end of a story, which means it’s going to be spoiled – thoroughly. So, if you’re a Monkey Island fan who hasn’t beaten Return to Monkey Island yet, or if you’re a series newcomer who wants to be surprised, proceed with caution. Or don’t proceed at all, because the details will not be spared. If you do decide to carry on then great! But here’s the thing: You should know that, like Monkey Island’s legendary secret, things might not live up to your expectations.

Despite my initial reservations due to Return to Monkey Island being the first game in the series in over a decade – and the first original creators Ron Gilbert and Dave Grossman were involved with since 1991 – I had an absolute blast with it. Not just on a basic adventure game level, but as a return to, well Monkey Island. And along with the various references to past games in the series (plus a lot of returning characters), there was this sense of finality hanging in the air from start to finish. It was exhilarating, but also melancholy, feeling like this is it. This is when we, and Guybrush, finally find the titular Secret.

And that’s exactly what he/we do. After all the puzzles and harrowing adventures; after all the mystery and riddles; after literal decades of wondering. We find the fabled Secret of Monkey Island.

Ultimately, Guybrush makes his way back to Monkey Island, delving deeper than ever before in a race to beat LeChuck to the punch, and then unexpectedly finds himself in a seemingly pointless back alley on Melee Island. It’s physically impossible, but then I noticed a rat that was a cutout moving along a track built into the sidewalk, and the windows were pasted onto the wall. I saw some discarded popcorn on the ground. Just like in LeChuck’s Revenge, it was fake. I was in an amusement park. Guybrush makes a comment I can’t quite recall now. Something along the lines of “Oh no, not yet!”

As the high seas adventure starts to melt away into what is presumably Guybrush’s real life, the mighty pirate himself lets the facade slip. The implication being that this, and by extension all of his other games, were imaginary – a sort of pirate-themed role-playing fantasy vacation. Something to, for at least a little while, make Guybrush feel like a swashbuckling hero instead of a mere flooring inspector. And then, sitting in front of an animatronic LeChuck dangling an animatronic locksmith by one leg, sits the Secret. All Guybrush has to do is grab the key from the locksmith’s hand.

Turns out the Secret is a T-Shirt. 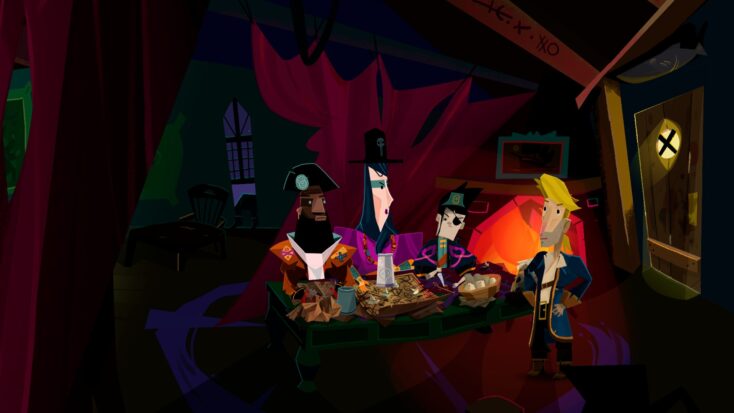 No joke, the Secret of Monkey Island is a T-Shirt, tucked into an extremely gaudy treasure chest belonging to series mainstay (and morally dubious businessman) Stan. Disappointed? I know I sure was at first. But at the same time, what else did I expect? What else did any of us expect? That’s the thing, though. As unexpected and disappointing as the final reveal of the mystical secret we’ve been chasing for over 30 years was, I also kind of loved it.

What’s more, the game had been foreshadowing this reveal the entire time. We finally learn the Voodoo Lady’s name, and it’s . . . fine? It’s a nice name but finally learning the truth takes some of the fun and mystery out of it, and Guybrush comments as much. There’s a cupboard in a ship’s galley that Guybrush expects is boarded up to contain some kind of unimaginable horror, but it’s actually just to keep the doors from flying open in rough seas. And again, Guybrush points out that the truth turned out to be less exciting. Even other characters make similar observations throughout, with Elaine (former Melee governor and Guybrush’s wife) flat out telling Guybrush/us that we shouldn’t expect too much from the Secret, because there’s no way it could meet decades of expectations.

If we’re being honest with ourselves, Elaine (and the game at large) was right all along. After so many years of curiosity and wonder, the Secret was never going to be what we all wanted – assuming any of us had even the slightest idea of what we hoped it would be in the first place.

This is why I love Return to Monkey Island’s weird, disappointing and kind of sad ending so much. For Guybrush, it’s a brief escape from reality. And really, isn’t that exactly what these games are for us? Aren’t we just like him in this case? Wanting a brief escape to an exciting and funny world where ghosts and zombies can be fought with root beer and sword fights are more about who has the sharper tongue than the sharper blade?

Perhaps more importantly: Even if it was all pretend (which, let’s be real, it always was because these are videogames), does that actually make the exhilaration and puzzle solving satisfaction any less real? I’m not convinced it does.

Anatomy of an Airplane