A monthly glimpse into whatever gaming bugaboo Rob’s got on his mind.

Monster Hunter is one of the best game series ever, but it can also be extremely tough to get into.

I’m almost 35 years old and listening to the main Monster Hunter theme still gets me all misty-eyed. I’ve collectively sunk thousands of hours into the series, across seven different games (nine if you count the two that came out on iOS), and hunted so many Kut-Ku/Rathalos/Rathian/Khezu/Shen Gaoren/whatever-dromes/etc that I could do it in my sleep. It’s been a staple of my personal gaming library for over ten years and that’s not about to change anytime soon. But it wasn’t always this way.

One of Monster Hunter’s biggest strengths is also its greatest weakness: the way it treats its players. Starting out in any of these games is a merciless grind, with at least an hour or more being devoted to things like gathering mushrooms and hauling massive eggs back to basecamp. These sections aren’t fun and while they’re obviously meant to teach players basic essentials like gathering important crafting materials in the field (and then crafting with them), it still takes far too long for new players to see what all the fuss is about.

The first time I tried to play the original game, I gave up pretty quickly. It was boring, the combat was slow and clunky, the cool-looking weapons I wanted to use were unwieldy – things did not go well. My patience ran out before I ever got anywhere and it felt like all I did was waste my time. This is a frustration I’m sure a lot of new players have felt, even to this day. Things have gotten better, with actual main event fights with various large creatures showing up much sooner than in older installments, but it’s still a grind.

Getting past this rut is the biggest hurdle (that isn’t a giant dragon-thing) that all Monster Hunter players will face, and I didn’t make it the first time. Thankfully I went back and tried again a while later and it all started to click. The advice I tend to give series newcomers is to “wait until you fight your first real monster before you form an opinion.” Granted, that does require having the patience to stick with it until that point, but it’s these giant beasts that make Monster Hunter what it is – and not just because they’re sort of collectively in the title. 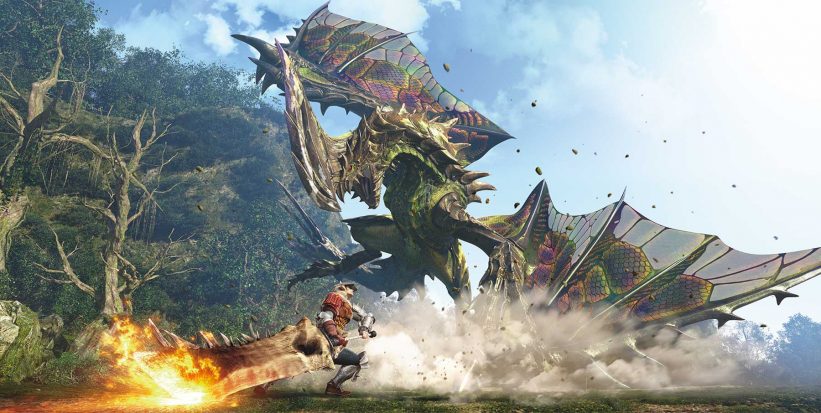 So how can Monster Hunter be accessible if it’s so inaccessible? Options. From the Playstation 2 original to the big ol’ 3DS thank-you to fans that is Monster Hunter Generations, the games have always given players a ton of options. There are several types of weapon classes to choose from, and each one suits a different play style. There’s an almost mind-boggling number of armor sets to craft, each with their own benefits and caveats. The roster of monster types is extensive and varied – even alternate versions like the Silver Rathalos or the Green Plesioth change things up a bit when compared to their vanilla counterparts.

Despite the early-game grind of digging up mushrooms and picking herbs, the way the difficulty progresses as more monsters appear is well balanced. Things begin with the simpler large creatures that pose more of a threat than the usual fauna, but they aren’t so dangerous as to wall off your progress. These early game beasts are also meant to get newcomers familiar with recognizing attack patterns and learning tells – because these skills are absolutely essential. Nothing short of some sort of invincibility hack will guarantee success if players don’t know what they’re doing in late-game hunts. Seriously, no amount of high end gear and weaponry will matter if you can’t keep yourself from getting hit. And those later monsters hit hard.

This, in a round-about way, brings me to why I love Monster Hunter so freaking much – and why I think everyone else who can get past the early moments do as well. There’s a somewhat ridiculous amount of variety when it comes to the armor you wear, the monsters you fight, and weapons you use (even more when you count things like the Hunter Arts special abilities that were added in Generations). This is awesome, and I adore having so many options. However, nothing beats the satisfaction of knowing that you did it all on your own.

What I mean is, there are no character levels in Monster Hunter. You can’t fight a bunch of small fries to earn experience points and make tough monsters easier. You have to get better as a player. You have to learn the tells; familiarize yourself with the weapons you use; learn the timing; know when to attack and when to wait; figure out and exploit elemental weaknesses; be willing to run straight at something that’s most likely intimidating as hell and wants nothing more than to eat you. And if you want to craft a certain armor set or a particular weapon, you’re going to need to do it over and over again with the same creatures in order to get all the materials you need.

It can be difficult at first. Very difficult. However, that repetition is what will make you better. Not just because you’ll figure out when your target is rearing back for a big attack, but because it teaches you how to be patient and look for openings instead of rushing in blindly. Honestly, the only thing more satisfying than defeating a new monster for the first time is finally hunting enough of them to finish crafting an armor set or weapon you’ve been working on.

This is why Monster Hunter will always be a part of my gaming life, even after all these years. It’s why I’ll always be there on day one with no hesitation to play the newest US release in the series. And it’s why I think everybody who hasn’t already should give the series a fair shot.

Monster Hunter and the Mainstream

What the Resident Evil 2 Remake Got Wrong
Previous Post

NBA 2K: MyCareer Mode is no Power Fantasy – And That’s a Good Thing