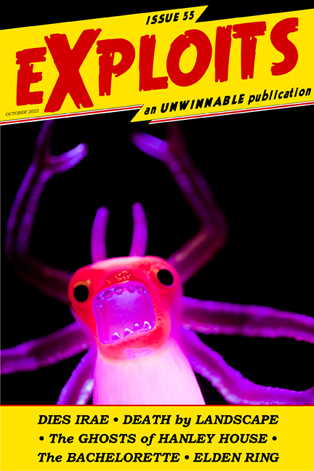 This is a reprint of the Games essay from Issue #55 of Exploits, our collaborative cultural diary in magazine form. If you like what you see, buy it now for $2, or subscribe to never miss an issue (note: Exploits is always free for subscribers of Unwinnable Monthly).

For many, Elden Ring is a tale of loneliness and stress, where the successes rarely outweigh the failures.

Throughout Elden Ring, you carve your way through the world, destroying bosses, finding secrets, and deciphering the somewhat confusing plot. Occasionally you will come across characters who will provide you with a quest or explain some lore, breaking up the emptiness of the world somewhat. More often, however, you are completely alone.

Luckily, my experience was quite different. Much of my journey through Elden Ring was spent with my fiance, laughing as we faced the many threats together.

At this point it’s interesting to note that before Elden Ring, my fiance wasn’t exactly a fan of From Software games. Her only previous experience with their work was playing an hour of Bloodbourne at my request. An hour which – I cannot stress enough – caused her much upset and annoyance throughout. Suffice to say, I had no expectations of her ever picking up a From Software game again.

Due to this, it was a wonderful surprise when she told me how excited she was about Elden Ring.

She was so excited, in fact, that she actually bought a copy before me. An extremely welcome surprise, given how much I wanted to play this game. But how exactly did this mutual excitement lead to our semi co-op Elden Ring experience? Well, in short, after playing for several hours, my fiance got very annoyed.

Now to give her credit, she did get quite far into Elden Ring before the annoyance truly set in. In fact, she defeated early bosses like the Tree Sentinel and Margit at level 20, without upgrading a single weapon. Something which, fans of Elden Ring will know, is very impressive for a first time player. Following this amazing feat, however, she got stuck.

No matter what she did, enemies were killing her in one hit while her attacks were barely leaving a scratch on them. Due to this, she was understably feeling very deflated and unsure how to go forward with the game.

Knowing I had experience with games of this style, she handed me the controller and I set off to upgrade her rather disappointing equipment as best I could. After said upgrades, she was finally ready to face her next big boss. She took the controller, entered into the boss arena, drew her newly upgraded sword… and died almost instantly.

At this point, with a small sigh, she asked me to give the boss a try. Whether she did this so she could laugh at me dying, or she felt I actually had a better chance at beating the boss, things have stayed much the same ever since.

We take turns on bosses, collect upgrade materials, level up our shared character, and basically have a great time working together. It’s simply wonderful, and a fantastic way to connect as a couple that came totally unexpected. In the end, it confirms something I have always known: We’re better together.