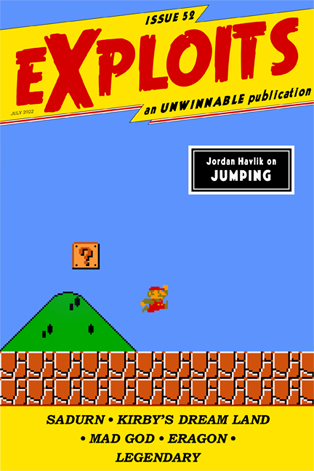 This is a reprint of the Games essay from Issue #52 of Exploits, our collaborative cultural diary in magazine form. If you like what you see, buy it now for $2, or subscribe to never miss an issue (note: Exploits is always free for subscribers of Unwinnable Monthly).

You boot up a Nintendo Entertainment System for the first time. It comes with a dual cartridge of some duck hunting game and a game you hadn’t heard of called Super Mario Bros. You see a man standing at the bottom of the screen, and a tiny mushroom-type creature walking toward you. You walk forward. Suddenly the upbeat music gets interrupted by a few notes as the man falls to the bottom of the screen. You have died. You try again, but this time you press a button as you come to the mushroom creature, and suddenly the man launches into the air and over the mushroom. You have just taken your first jump in a videogame.

We don’t often think about our first time jumping in a videogame because it is one of the first things we do in a lot of videogames. It is also one of the most essential actions we can perform. Think about a game series like Halo. First-person shooters don’t often have great jumping, but Halo is an exception. How often do you jump out of the way of grenade that’s bouncing toward you? How often do you use grenades to perform a grenade-jump in order to collect one of the many hidden skulls throughout the series? Halo: Infinite went so far as to add a grappling hook, and greatly improved the jumping and traversal by using the already great momentum Master Chief has (despite wearing armor that canonically weighs half a ton).

Jumping might not even cross our minds when it is omitted, or put on the back burner. For instance, you can jump in Dark Souls, but the way you do it is by running and hitting the roll button. You will most likely never use the jump in combat, but you will often use it in traversal like when climbing across rooftops in Anor Londo. Your character sucks at jumping, but From Software insists that you do it anyway.

It wasn’t until Elden Ring that players were finally given a dedicated jump button. It seems like this would be a revelation for the player, but it is not. As in Dark Souls, Elden Ring’s jumping is stiff and awkward. You can use the jump in combat, but during frantic fights it doesn’t offer the same maneuverability as rolling has for nearly every From Software game. Platforming is once again clumsy. However, Elden Ring adds one extra element to the jumping equation that changes the formula: the horse, Torrent. 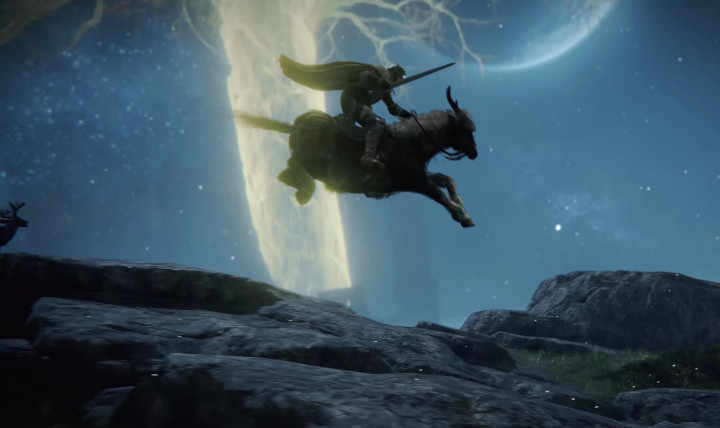 Torrent can double-jump. He is glorious steed with blinding speed, and the uncanny ability to leap on thin air. Finally, after nearly a decade of bad jumping, From Software managed to make it one of the most fun things to do in their videogames. You use Torrent to jump to hard-to-reach items, perform frantic double-jumping maneuvers as you charge toward a castle and can even successfully dodge attacks while jumping in combat. Torrent is From Software’s jumping insistence fully realized.

Jumping is one of the most important mechanics in videogames, but we don’t often think about it in the moment. So here’s to the good jumps and even the bad jumps. Without jumping we wouldn’t be able reach the very heights we strive for.