At the risk of being timely, the current month has been rife with wide-reaching accusations of intention. Velma is a lesbian, and always has been according to two of her past writers. Always been intended to be, that is. In my introduction to the function of intention in August, I mentioned how our reverence for timelines, for canonicity – realism in the driest sense – has displaced representation into alternate realities. The dual nature of intentionality, which is imbued or assumed to specific ends, demands an author confirm interpretations of the images on the screen, else its absence deny such interpretations.

Another. A factoid, a tidbit, a piece of trivia self-professed film fans will tell you about, riding a convection current that continually resurfaces on the timeline, about how Akira Kurosawa didn’t intend to push the visual language of violence in film forward with the immense amount of blood spilled in his 1962 film Sanjuro. This invocation not made to refute any reading, but as if this is interesting to an end in and of itself. My friend Renata concisely explained her discontent for these conversations as obsessions over the “why” rather than the “how.” Of Kurosawa’s films, and of texts more broadly.

These why’s that exist as evergreen SEO articles function to close texts teeming with meaning, defang art of its more unwieldy elements, and, as writer Nathalie Olah puts it in her manifesto Steal As Much as You Can, create a mode of media “the country can understand and comfortably talk about over the dinner table.” We could imagine the dinner table, dressed in the severed limbs of Flanderized characters, reduced to self-caricatures by a rotating staff of burnt-out writers or maybe misdirected into hollow archetypes by fickle executives – depending on your interpretation.

Casper Kelly’s 2014 short film, Too Many Cooks, parodies the ‘80s sitcom intro with a series of successive skits riffing off one another for far too long into absurdum. Drawing on the tropes and imagery of ‘80s television, Too Many Cooks is at once an absurdist comedy sketch and a critical cautionary tale, full of pastiche referents like “relics of a time that we long for but shouldn’t return to.” Writing for BuzzFeed News, Jace Lacob describes how these fetish objects are “insidiously comfortable,” with the power to both “tug on your heartstrings, but also to rip them right out of your chest.” 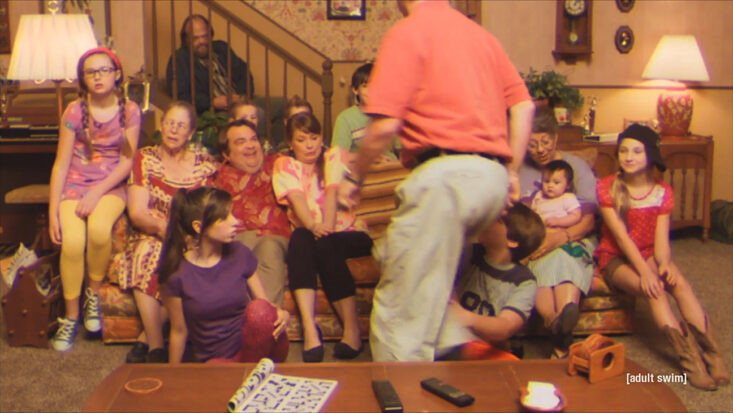 And Too Many Cooks relishes in that turn. Robert Lloyd’s description of events in the LA Times best summarizes the plot, how the cyclical universe “comes loose from its axle; noise is introduced into the signal; the actors become detached from the credits, though still wearing their names like badges; there are decapitations.” Like comets in the sky, excess and non sequitur always come back as modes of expression in online culture. (Just a week before Too Many Cooks’ television premier, Rob Cantor uploaded the extravagant music video for his song “Shia LaBeouf” – featuring two choirs, dancers, a string quartet, aerialists and papercraft – to YouTube.)

All these absurdities lead many to ask why? Why, as a disapproval of art that seems meaningless, of time and money seemingly wasted. Why, like a child who does not know they’re asking questions more fundamental than general, leading us – as Too Many Cooks takes Mike Rugnetta – to the existential questions. Lloyd himself can’t resist the thought, asking of the film: “Is it comedy? Absolutely, as intended. Is it art? I’m tempted to say so, though surely it was on no one’s mind in the making of it.” Again, the inquiry is carried by assumed (un)intentionality.

The contradictory uses of intention in critical discourse, to both reify and undercut interpretation, leaves the author in a precarious state. Beholden to the fandom, they are at best a sort of demiurge that can channel continuity. Provenance takes the form of nostalgia. And the fandom, zealots, asks questions that tease apart the limits of one’s ontology. In a Reddit AMA, one commentor asks Kelly what result of one of the films more ambiguous moments was. Kelly responds. “Should I even say what I think? What if you disagree?” In another thread, editor Paul Painter silences one commentors why’s with the maxim: “Television is fiction.”

These questions are part of the critique Too Many Cooks is trying to make, perhaps unsuccessfully given the fielded questions. What more can you do with the surface level absurdity of trying to make sense the biological incongruities of a puppet cat in an absurdist black comedy sketch airing in the early morning hours of Adult Swim programming? In seeking to “destroy our collective nostalgia” for the ‘80s sitcom, and counter the evolving audience relationship to media as content carried by it, Too Many Cooks can’t evade the very killer it exposes.

The Monster Issue, Too Many Cooks

Keeping it in the Loop