I was really excited for Massive Darkness 2, technically subtitled Hellscape. I got pulled into the hype surrounding the Kickstarter before I had even played the original game, but once I did, I liked it so much that I went all-in on the sequel. And Massive Darkness 2 “superfunded”, meaning that it unlocked any number of stretch goals, so that the pile of boxes that finally arrived at my door was truly massive indeed.

Cracking open all those boxes was a fun task, even if it was also intimidating and, honestly, hard to even imagine where I was going to put it all. This was another CMON product, which means that the total Kickstarter amounted to something like 200+ miniatures, not to mention countless cards, tokens, dungeon tiles, and so on. An exhaustive (and exhausting) undertaking, to be sure, and it took a long time before I had even sorted the contents of all the boxes enough to play them.

I was excited, though, as I mentioned. I play a lot of games, and especially a lot of these dungeon crawlers, but the original Massive Darkness has remained a favorite over the last two years. There was plenty of reason to assume that I would like this iteration just as much, if not more. I was particularly looking forward to the way they had retooled classes, making them play asymmetrically and incorporating truly unique-sounding mechanics into each one.

The rogue, for instance, draws tokens from a bag that affect what they can do each turn, while the wizard casts spells using a magic amulet that rotates each time it is used, meaning that different spells are available at different moments.

My favorite – in the core box, at least – is the ranger, which incorporates a sort of betting mechanic, as you turn over as many cards as you like whenever you make an attack, each one of which has a number of arrows on it. Turn over cards totaling exactly seven arrows, and you get a bullseye, the best possible result. Turn over fewer, and you get the next best. Turn over too many, though, and you get the worst.

Unfortunately, my excitement was to prove short-lived. Reading through the rules (which they provided in PDF form in advance of the game ever arriving on my doorstep) everything looked promising enough. When I actually sat down to play for the first time, however, I found myself not having nearly as much fun as I had when I played the original Massive Darkness.

You could chalk that up to a whole host of things. Having my expectations set too high, the awkwardness that comes with trying out a new game for the first time, you name it. But I couldn’t shake the feeling that they hadn’t actually addressed any of what I perceived as the shortcomings of the original, while also making the game too cumbersome.

Something I’ve written about before is that, as much as I love a good dungeon crawl game, much of the time they are too big for me. Too involved, too lengthy, requiring too much time and too much commitment to play more than, like, twice. And because they are so involved, so concerned with emulating as much as they can of the TTRPG experience, playing them, like, twice nets you only a tiny fraction of what the game has to offer.

All of which is fine, if that’s what you’re looking for, but a part of what made Massive Darkness so special was how well it toed the line between oversimplifying the dungeon crawl into something that was too abstract to feel like a real RPG-lite experience, and over-complicating it to the point that it felt like you might as well just go play D&D. For me, at least, Massive Darkness hit a near-perfect bullseye. It’s not what I would want from every game, but it nailed this sense of being at once quick and light and intuitive while also still feeling like it had a real depth of play to it. 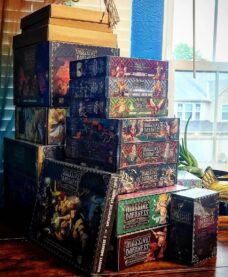 Maybe better still, the way that leveling worked, you felt like you got the whole game experience every time you played. That’s… just not as true with Massive Darkness 2, at least for me. In part because of the (very clever) asymmetrical classes, level progression feels less on-the-fly and the rest of the game follows suit. This is probably not helped by the fact that Massive Darkness 2 offers a campaign system, in the form of an optional expansion that lets you level your characters up farther while also offering more continuity between quests.

Again, this isn’t a bad thing on its face – especially since it is optional – but I think that, in making room for it, they jettisoned some of what made me love the original so much in the first place. All of which is a shame, because, in addition to everything else, the Kickstarter for Massive Darkness 2 offers something that seems absolutely delightful: a new way to use all your stuff from the original. All the characters, all the monsters, even the room tiles get updates to the 2e ruleset, and there’s even another add-on that lets you add characters and monsters from the fantasy-themed versions of CMON’s popular Zombicide games.

That seems like an incredible amount of value, and I wish that I appreciated it more than I do. Not that any of this is to suggest that Massive Darkness 2 is, in any meaningful way, not a good game. I think that the ideas that are at work in the asymmetrical classes, alone, make it absolutely worth looking into for anyone who is interested in these kinds of things. I just wasn’t for me in the same way as its predecessor, which ultimately says more about me than it does about the game…