“Heart, kidney, pancreas, shard.” I whisper it under my breath, a mantra. Or was it a lung? Heart, kidney, pancreas, lung. I buy the lung and toggle back to my order requests. No, it was a shard. I sell the lung and buy a heart – they’re cheap today – but no shards land on the market before it closes. Maybe tomorrow. I toggle over to my investments. I’m sitting on five shares of stock in human souls, but the price hasn’t gone up enough to sell, so I click the bright pink button that opens the market to begin the day anew.

This is Space Warlord Organ Trading Simulator, a game that is exactly what it sounds like by the title. And yet, it’s also a game that resists easy categorization.

The player’s objective, according to your mentor, Mentaur Minter, is to “BUY organs, SELL organs, take on client REQUESTS, FULFILL them, and use THEIR money to fuel YOUR future.” This is easier said than done, of course. Not every request is legitimate, and it’s easy to spend too many precious seconds deciding which requests to take on.

Additionally, a day in Organ Trading Simulator lasts only two and a half minutes, during which time players almost always have to compete with up to four other traders, each of whom has their own buying goals and preferences – rare organs, mythic organs, tiny organs – that can hinder your own goals. Each organ has a number of characteristics, too, which players need to pay attention to in order to fulfill requests. Pay too little attention and you’ll spend on the wrong organ (wasting money and valuable cargo space); take too long to decide and another trader will buy out from under your nose. 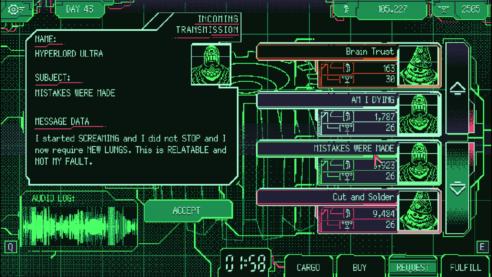 Games about capitalism, which Space Warlord Organ Trading Simulator most certainly is, aren’t new. Business games have been around since the 1960s, and the 1990s saw the launch of several simulation and tycoon series, including Harvest Moon and Rollercoaster Tycoon. This was also around the time when “4X” games – which get their nickname from the goals of exploration, expansion, exploitation and extermination – became popular. In both genres, the objective is supremacy, whether financial, political, militaristic, or otherwise. More recently, though, there has been a surge of games – particularly indie games like Kentucky Route Zero and Night in the Woods – critiquing the brutal and inherent violence of capitalist systems.

Space Warlord Organ Trading Simulator offers both tycoon mechanics as well as criticism, which creates an interesting tension in the gameplay. Both Night in the Woods and Kentucky Route Zero demonstrate how uncompromisingly punitive capitalism is to the working class by centering their stories on poor characters whose lives hang in a precarious balance between survival and snowballing, all-consuming debt. Kentucky Route Zero especially demonstrates how easy it is for disempowered workers to be controlled by their debts and buffeted about by a callously cruel, profit-driven system until they are no longer of use to the system. There is no power for the player to gain, which is what makes them such effective vehicles for critique.

In many ways, tycoon and 4X games are the direct opposition to this kind of game. In these games, the player plays within the boundaries of capitalist systems to accumulate as many resources as possible: money, property, people to defend and care for that property, people to help the player acquire more property. Things. In 4X games, power is all there is to gain. 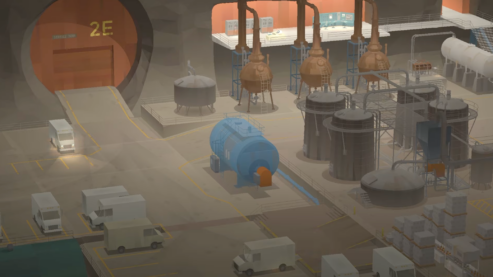 Per Mentaur Minter, this is also the Organ Trader’s goal. Like other tycoon games, Space Warlord Organ Trading Simulator forces players to work within a set of economic rules and processes to accumulate wealth. Its multitude of pulsating organs aside, Organ Trading Simulator is also mechanically similar to other tycoon games in that it gives players a handful of opportunities and only a short window to maximize them.

The first time it popped into my inbox, I was horrified to receive a request from a traumatized soldier hoping to procure a stomach just to feel something warm again. As I continued playing, though, these types of requests kept cropping up; over time they became routine. The goal-oriented nature of play makes it easy to fall into that routine, and easier still to forget that every organ on the market is attached to a life. Ultimately, this creates a tension between enjoying the game and reckoning with your actions as a trader.

By forcing players to engage with this tension, Organ Trading Simulator becomes a fascinating and engaging critique of the obscene violence of capitalism that, despite the absurdity of its premise, only barely feels like satire.

Heart. Kidney. Pancreas. Soul. It doesn’t matter. Everything has a price.

Madison Butler is a writer and self-proclaimed jock. She is an editor at Sidequest (sidequest.zone), co-founded the blog Critsumption and once got really into powerlifting via Fitness Boxing for the Nintendo Switch.

How to Build a Racetrack

I’ve Been Staring At This For Two Days