In JoJo’s Bizarre Adventure: Diamond is Unbreakable, a serial killer that looks like David Bowie detonates a middle schooler’s brain with a supernatural power called  Killer Queen. Later, one of his friends recalls: “Shigechi was an irritating, greedy little punk, but he was the type of guy you just couldn’t leave alone.”

Shigechi’s brain injury doesn’t kill him. One thought propels him beyond death: “that nasty, filthy guy can’t be allowed to live in the same town as mama and papa.” To put it another way, in this moment, Shigechi is motivated by something beyond his greed or self-interest. Beyond, even, his parents’ safety. It’s a kind of moral disgust spurred by his personal encounter with evil. It is not right that a murderer should live in the same town as kind parents who love their children. Something is wrong in Shigechi’s community and he feels called upon to answer.

Although Shigechi dies before he can tell his friends what’s happened, his legacy is to advance the battle against the serial killer festering in his quiet suburban town.

YOSHIKAGE KIRA CANNOT KILL YOU IN A WAY THAT MATTERS

This is not the only example in JJBA:DiU where a character, when confronted with their death and the destruction of hope, transcends themselves and connects with something larger.

Koichi Hirose is a shy and nervous guy who is still learning how to use his supernatural powers (called a Stand). Most of the time, Koichi is in awe of the other characters – particularly Jotaro, a former JoJo protagonist. On a mission to investigate the serial killer, Jotaro is maimed beyond function and Koichi must face the mystery killer alone. The killer overpowers him, smashing Koichi’s face into the asphalt: “You need to be more like me!” the killer screams maniacally.

Koichi meets the inevitability of his death with transcendent defiance. Burbling and coughing up blood, Koichi reveals the identity this serial killer has hidden successfully for decades: “Your real name is Yoshikage Kira.” 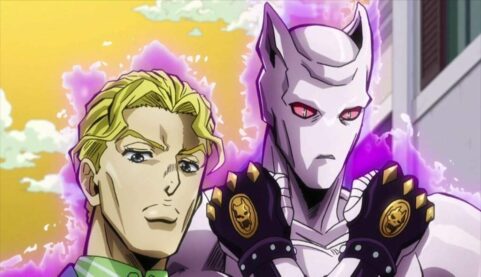 Shaken, Kira asks Koichi what the point of knowing his name is when he’s about to erase Koichi from existence. Koichi responds.

“Sure, you’re going to kill me, but hey, even me, a brat like me, was able to figure out your name. You’re not that big a deal…you’re a complete fucking idiot. See you in hell.”

Koichi goes to his death without despair, because he believes that justice will be done. He connects to the idea that what he represents cannot meaningfully be “erased” at all: the heart of justice that defies the existence of Yoshikage Kira.

COMPARED TO THAT HEART, YOU’RE NOTHING

One of JJBA:DiU’s concerns is the way in which a community is like an ecosystem: harm ripples out, unpredictably. One of the subjects of this harm is Hayato.

Hayato is younger than Koichi and Shigechi, doesn’t get along with his parents and has no Stand. He is, to all intents and purposes, an ordinary kid. One day, Hayato’s dad comes home from work and starts acting all scary and weird. Convinced that something is wrong, Hayato obsessively records his father using his video camera. His ‘father’ is really Kira in disguise.

Like many of the characters in JJBA:DiU, Hayato is seeking evidence to prove to others what he already knows himself. He wants his father’s wrongdoing to be seen.

At the culmination of the show, Hayato is trapped in a time loop, forced to repeat the same morning over and over, subject to the ultimate expression of Yosgikage Kira’s will. He cannot seek help. He cannot speak the truth. Anyone who seeks to expose Kira is erased from existence and Hayato takes the blame. To put it another way: Hayato is totally isolated by the nature of his abuse. 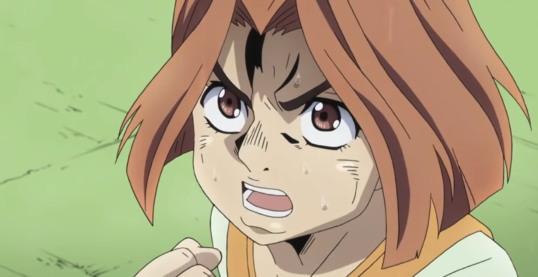 A member of our ensemble cast, Kishibe Rohan, tracks down Hayato. Rohan has witnessed Hayato on one of his many trips to videotape his father. “Is this you taking a video of your dad in the photo?” Rohan asks him, bluntly. Hayato tries to protect Rohan by running away; Rohan interrogates him psychically with his Stand. This kills Rohan.

Hayato is extremely moved by Rohan’s death. I call this feeling “solidarity,” because whilst Hayato and Rohan have never met and do not know each other, what Hayato does know is that Rohan is engaged in the same struggle to oppose Yoshikage Kira. Rohan has, quite literally, seen Hayato; these two are engaged in the same project of liberatory justice.

Like Shigechi and Koichi, Hayato connects to a “heart” beyond himself, the “heart of justice”. This metaphorical connection allows him to make a literal one – to make a phone call – and it is this symbolic defiance that precipitates the final battle against Kira.

Kira, ultimately cornered, is deeply confused. How have things turned out like this? Reality should have allowed him to win.

Hayato points defiantly at his un-father.

“Any fate that would side with you, any opportunity that would come your way – it’s nothing compared to the heart of justice that’s assembled here right now. Compared to that heart, you’re nothing.”

What we have been talking about today is what I call the transpersonal. The transpersonal is a spiritual outlook, an organizing principle for integrative psychotherapy and a way of describing patterns of meaning-making that we, as humans, can be engaged in. I do not claim to be an expert. Nonetheless, in this column, I aim to use the transpersonal as a way of exploring pop culture.

I’m looking forward to it.

Aster Shen has returned. Her favorite thing is to tell people who think they’re strong “no” straight to their faces. She has too much identity, too little time, and loves her best friends dearly.

Evil as Can Be