Hi! I’m back! If you’ve been reading Unwinnable for a while then you’ll probably recognize me from my World Tour column where I talked about works from different countries every entry. On this occasion we’re shaking things up and taking ourselves through time!

NO MORE BUSINESS AS USUAL! Come to Wall Street in front of Trinity Church at 7AM Tuesday March 24 for a MASSIVE AIDS DEMONSTRATION to demand the following

President Reagan, nobody is in charge!

AIDS IS THE BIGGEST KILLER IN NEW YORK CITY OF YOUNG MEN AND WOMEN. Tell your friends. Spread the word. Come protest together. 7 AM … March 24 … You must be on time! AIDS IS EVERYBODY’S BUSINESS NOW.

To kick things off with this new column we’re discussing two films from 1987, both by trailblazing gay directors, Joel Schumacher’s The Lost Boys and Derek Jarman’s The Last of England. The former film focuses on a pair of teens who move to a new town with their mum and soon discover that it’s full of very cool and totally-not-gay vampires. The latter film sort of defies description, it’s 87 minutes of poetic queer rage directed squarely at Thatcherite England.

These are clearly very different films, something central to both of them is an engagement with contemporary panics about moral collapse in the West. While neither film explicitly says anything about the AIDS crisis or the Satanic Panic, the sense of moral panic clearly influences both of them. More specifically it’s worth focusing on how the so-called collapse of the hegemonic family, AKA the vision of two married white middle-class heterosexual parents with good white children raised in the home they own which is/was understood to be the moral backbone of society, is reflected in these films. 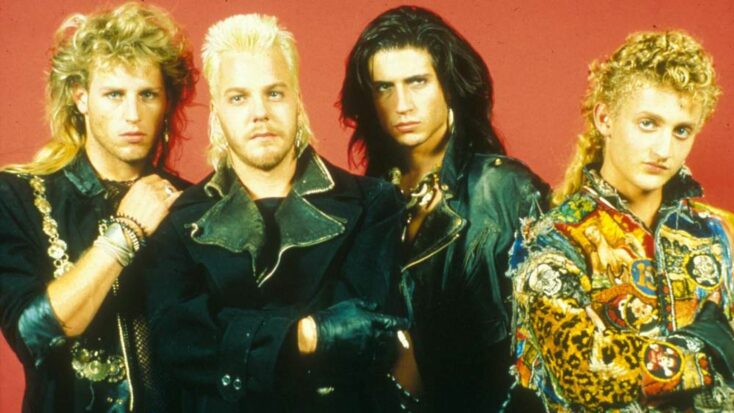 On July 13th 1987, the first McMartin pre-school trial began, based on a storm of dubiously-evidenced childhood sexual abuse allegations which picked up steam by being wrapped up in the contemporary Satanic Panic. The trial would eventually turn out to be the most expensive in California history and result in no convictions, by the end of the process the accused Ray Buckey had spent five years in jail without being found guilty of any crimes.

The family in The Lost Boys is already a far cry from the idyllic nuclear unit that New Right dreams are made of, with a father who’s out of the picture and a grandad who isn’t much of a patriarch. However, this family unit is further threatened by the threat of the roaming biker gang that seeks to draw the oldest son into chaos even further from the good moral path. 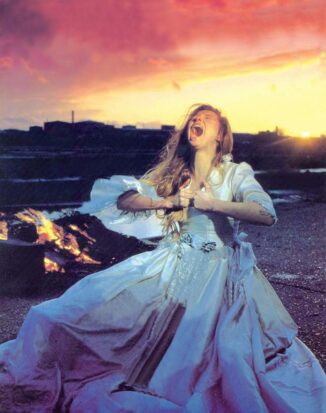 As with everything in The Last of England, meaning is much less straightforward, but it’s still there. There is a delirious sequence where a marriage takes place and it feels feverish and chaotic. Aside from this we also see the iconic Tilda Swinton in her dress and veil which she destroys in front of an open flame. In his own way, Jarman engages with the panic over moral decay by defiling one of the main institutions of Western Christian morality.

In June 1987 the Conservative Party won that year’s general election, suffering some seat losses but still maintaining a healthy majority. One of the key elements of their campaign was reaffirming their commitment to maintaining their staunch moralistic stances exemplified by the campaign poster here. The next year this government would go on to put Section 28 in place which functionally forbade local authority employees (especially in schools) from talking about homosexuality in anything other than negative terms. 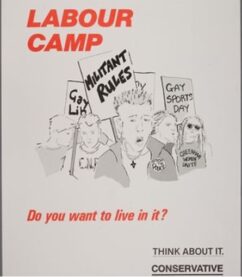 While on its face The Lost Boys is about the eventual triumph of The Family over these rogue elements, the reality is more complicated. Talking about Milton’s sympathetic portrayal of the Devil in Paradise Lost, William Blake wrote “The reason Milton wrote in fetters when he wrote of Angels & God, and at liberty when of Devils & Hell, is because he was a true Poet and of the Devil’s party without knowing it.” I think the same applies to Schumacher’s portrayal of vampire society in The Lost Boys. Though this time he very much knew what he was doing – this was not a man afraid in reveling in “sin.” It’s infernal, it’s violent, it’s murderous, but it is also undeniably sexy. According to Schumacher, in a test screening for the film a bunch of “surf punks” tore up the cinema with excitement at one of its most violent scenes. The costumes (by Susan Becker), hair and makeup (by Ve Neill) are a series of wild choices that defy time and there is an incredible amount of leather all around. The film’s tagline is “Sleep all day. Party all night. Never grow old. Never die” – and who could really resist the temptation of an eternity of bacchanalia in an era drowning in queer death?

For Jarman’s piece there is no facade of the triumph of the family. He leans hard into the decay of it all. The delirious wedding scene is punctuated with too-wide smiles that feel painted on and the way that Jarman plays with the frame rate pulls you into the delirium yourself. The frenetic editing and lack of dialogue makes it very clear that he is not only disinterested in the structures and forms that are traditional/hegemonic but is actively trying to tear them down. With this, Jarman gleefully moves into the sacrilegious, one of the most striking visuals of the film is when two men (one of whom is in paramilitary gear) have sex on top of a giant Union Jack. The paramilitary part of the image is only made more striking when you consider the context of Thatcher’s hardline stance against republican action and the likelihood (as suggested by later investigations like the Police Ombudsman report) that British security forces were giving loyalist paramilitaries carte blanche to commit act of terror. There are some real parallels to Jubillee a decade earlier but this time it feels like Jarman’s sacrilege has much more grit and direct pain to it. With the seething anger in every frame comes a catharsis that you can only really know as a person who has been denied anger and expression for years. To separate the rage from the Letting loose is not only necessary and freeing but it just feels fucking good!

Hurricane Annie ripped the ceiling of a church
And killed everyone inside
You turn on the telly and every other story
Is tellin’ you somebody died
Sister killed her baby ‘cuz she couldn’t afford to feed it
And we’re sending people to the moon
In September my cousin tried reefer for the very first time
Now he’s doing horse, it’s June

In the face of aggressive moral panics these men are defiantly enjoying the monstrous role assigned to them. They are leaning into the hedonism, the rage and the catharsis. In their own ways each piece of work feels like a cry against the moral policing of the time saying, “if I am burnt at the stake then I will burn bright and beautiful and glorious!” Much better that than to fade in silence.

The Last of England, The Lost Boys

There Swings a Skull Completes the Bigger Picture with Grim Tidings