This is a reprint of the letter from the editor in Unwinnable Weekly Issue Twenty-Eight – check out the excerpts at the end of the post. You can buy Issue Twenty-Eight individually now, or purchase a one-month subscription to make sure you never miss and issue! 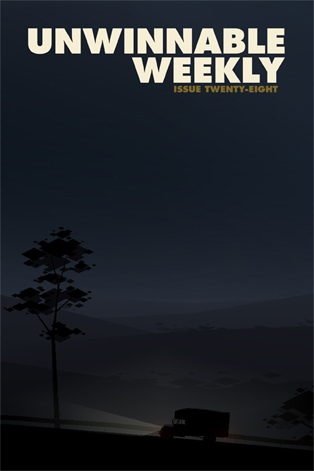 So, I just read the new Star Wars comic book.

Most of you are probably surprised I gave it a shot, but it isn’t that much of a reach. The writer, Jason Aaron, is responsible for what is probably my favorite comic of 2014, the unrelentingly brutal (and surprising) Southern Bastards. Meanwhile, the artist, John Cassaday, brought Planetary to life way back when. Cassaday is a slow artist and his work appears so infrequently it seems crazy to not snatch it up when it appears.

Cassaday’s art is pretty breath-taking. He somehow makes Han Solo, Luke Skywalker and Princess Leia look like they stepped out of the movies and into a comic strip, A-Ha style. Its a bit unnerving, actually.

That’s about the only nice thing I can say about the book.

The fact is, I want these guys wasting their time on a Star Wars comic the exactly as much as I want Rian Johnson tied up for the next four years making two Star Wars movies: not at all.

Aaron’s voice is barely present in the dialogue. This is a comic assembled using the pieces of a Star Wars-themed set of magnetic poetry arranged on some monolithic fridge full of nostalgia. Classic characters? Yup. Jabba name checked? Yup, because he’s the only gangster in the universe. Vader shows up? Yup. AT-AT walkers in the background? Sure.

Dollars to donuts there’s a scene with a speeder bike before the end of the first arc.

Deliver me from the old.

We’ve got some great stuff this issue. Erik Weinbrecht admits his addiction to collectible card games while obsessing over Disney’s Sorcerer’s of the Magic Kingdom. Erika Barcott dishes on her love for Mass Effect’s Garrus Vakarian. Javy Gwaltney delivers a fascinating look at Kentucky Route Zero and the promise of America. And, dialing in from 38,000 years in the future, our favorite Space Marine Aurelius Ventro gives us advice on how to get into shape.
As ever, send your letters to stuhorvath@unwinnable.com.

We began to safeguard our collection and only carry the duplicates with us and, much like the Pokémon cards of my past, the game took a back seat to collecting. We never even ended up finishing the first round of play, so I guess we’ll have to wait until the next trip to finally beat that pesky Hades.

Falling in love with a videogame NPC is no weirder than falling in love with Harry Potter or Benedict Cumberbatch or Elvis. Which is to say, pretty weird, but the human heart is a strange place. I never thought I would fall for a guy with a metallic carapace, shark teeth, lizard skin and a secondary external mandible. Still, as Shakespeare said, “Love looks not with the eyes, but with the mind.”

Sometimes the trees blend with the objects and characters, combining the pre-Manifest Destiny pastoral mythology of America with the modern era mythologies, like Conway, dressed in his bomber jacket and adventure boots, or even the mundane orange suburban car. What’s happening here is a hymn (and maybe a dirge) for a certain side of America.

As you are no doubt well aware, Space Marines are genetically-enhanced, functionally immortal post-human demigods with perfect physiques. Somewhat like the “Lorenzo Lamas” of your era.