Signs of the Sojourner is about one of the most interesting sources of friction that we encounter in day to day life: understanding, and being understood. There’s a truth at the heart of its conversational card games: you cannot prepare the perfect conversation.

There’s an immediate way that this plays out. People in Signs of the Sojourner have different ways they express themselves. In every region two will be predominant, with people being either more empathetic or more direct, and either more logical or more creative. Each of these expressions is represented by symbols, and you need to be able to play cards that both match the rightmost symbol on the card last played, and set up the same opportunity for your conversational partner.

If your deck is spread too widely – if you try to please everyone – you’ll have too few cards to play that are relevant for any given conversation. Your directness will be blunt to one, your empathetic approach circulatory to another, your logic cold, and your creative response non-committal.

But with a narrowly focused deck, among people who you’re aligned in intent and style, you can still clash. With a deck tailored for empathy and logic, and a plan to stick to the region where my partners would meet me with the same, I thought I’d made a winning plan. But while it’s possible to meet empathy with empathy, and logic with logic, my partners would still sometimes blunt their openings against what I was offering. I hadn’t done anything ‘wrong’ – but they couldn’t meet me in the middle. 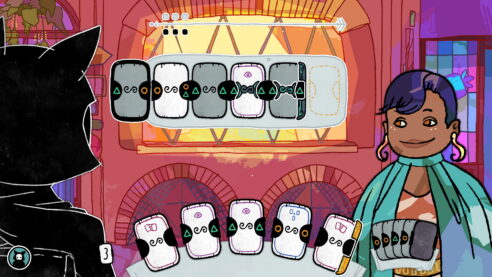 There’s a wonderful card called ‘Accommodate’, that duplicates the last card played to you exactly. At first glance it seems like it should be incredibly powerful, being able to fill in any gaps in your own deck, but its uses are much more limited. If the two sides of the card don’t match, accommodate can’t fix that. It will extend streaks where you’re already in agreement, and sometimes set up tiny temporary agreements that you can then safely ‘break’, but you can’t accommodate your way out of a bad setup.

We often talk about communication like a one-sided action that we as individuals have full control over. The Internet is full of advice columns and scripts of how to navigate difficult conversations, like breakups, family conflicts, or awkward office scenarios. How to listen well (and how to express that you’re listening!) They’re tools, and strategies, but asking someone to understand you leaves the response fully in their hands.

In Signs of the Sojourner, there is no deck you can build that guarantees you will always be understood. As in life, you’re vulnerable to other people’s choices, their generosity, their good faith, and their bandwidth. There’s a truth in the uncertainty that Signs of the Sojourner then plays with: not game-y ideals of ‘winning’, but of best efforts and embracing uncertainty.

card game, Communication, connection, Empathy, Signs of the Sojourner, will

How to Make Me Snap in Metroid Prime Federation Force