This feature is a reprint from Unwinnable Monthly #154. If you like what you see, grab the magazine for less than ten dollars, or subscribe and get all future magazines for half price. 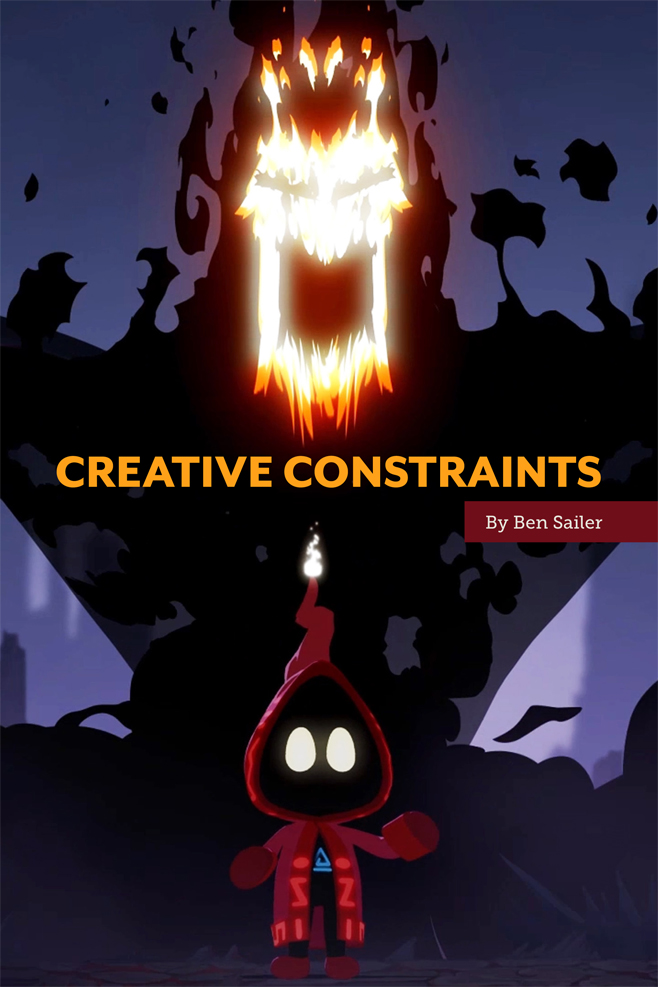 The phrase “necessity is the mother of invention” (derived from the line “our need will be the real creator” in Plato’s Republic) was coined long before the dawn of videogames. Yet videogame history is full of examples proving its prescience. Developers have been finding workarounds for technical constraints since the days of Tennis For Two, making design decisions to compensate for hardware and software limitations, often without the player’s awareness (and even as home consoles have grown more powerful).

Sometimes this leads to more interesting and innovative ideas than game designers originally envision; for example, Hideo Kojima built the original Metal Gear around stealth mechanics because it was difficult to animate compelling combat sequences on the MSX2. This choice elevated an ordinary action title into something original, and in the process, it laid the foundation for the entire stealth-action subgenre.

Unbound: Worlds Apart, the 2021 puzzle-platformer from Bucharest-based Alien Pixel Studios, offers another modern demonstration of the same principle in action. The game’s hand-drawn aesthetic and branching pathways at once invoke memories of Hollow Knight, Ori and other side-scrolling adventure titles. It’s graphically and mechanically polished, with vibrant visuals, carefully crafted puzzles, and tightly tuned platforming, offering an experience that can hang with its peers in a crowded genre.

For an independent company with three employees (including co-founders Sergiu Craitoiu and Andrei Simion, as well as concept artist Olga Ciob), creating something that can compare favorably to the cornerstones of its genre is quite an achievement. Then again, this is a crew with experience working around resource restrictions. Even though he had no professional game development aspirations, Craitoiu started creating his own games (which he calls “crappy”) in college, which helped him learn how to use DirectX and OpenGL.

Craitoiu took graphics and programming jobs after graduation, but by the time he turned 24, he was uncertain whether he was on the right career path. Then, an invitation from a friend helped him find the direction he was searching for, proving his time spent developing rudimentary games in his off hours might have been more valuable than he thought.

“A good friend asked me to go with him to a game jam and use Unreal Engine to create a game in 24 hours,” Craitoiu says. “I had no idea about these kinds of events, and I joined because I thought it will be fun and challenging. There, I met other people with a passion for games and they had ideas about programming, design, music and so on. It was very fascinating for me, and I said this is what I want to do for the rest of my life.” 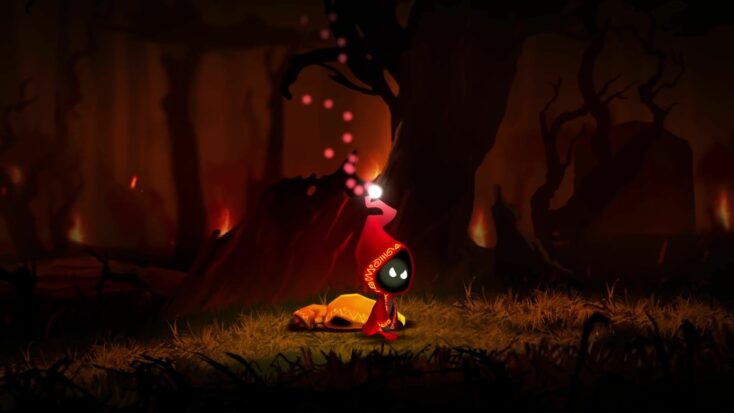 Craitoiu and Simion started Alien Pixel Studios two years later in 2016, with Ciob coming on board in 2017. They knew they wanted their first game to be a puzzle-platformer, but they also knew they wanted their debut title to have unique mechanics and weren’t interested in merely copying their source material. They needed some sort of differentiator. Something that players haven’t seen countless times before.

The pair explored giving players the ability to manipulate level environments, but while the concept was interesting in theory, it was difficult to manage the number of on-screen variables necessary to execute it. Then, thanks to a sudden flash of insight from an unexpected source, Craitoiu thought of the perfect solution, and the core gameplay loop that would give Unbound: Worlds Apart its own identity.

“One day I was watching a video from the metal band Architects called ‘Gone With the Wind,’ where there was a huge bubble behind them where stuff was happening,” Craitoiu says. “So, it somehow clicked that we can use something like a portal, and not change the level.”

Based on its colorful and vibrant hand-drawn aesthetic, heavy music might not be the most obvious influence on Unbound: Worlds Apart; for the most part, this is family-friendly fare. Once the story starts, though, it does quickly reveal some bleak themes. 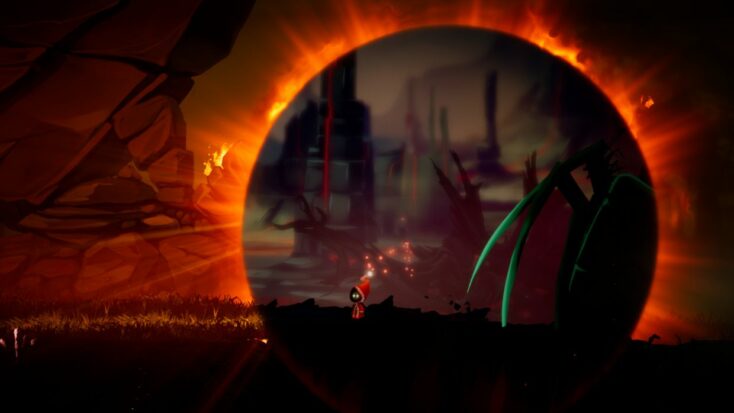 The plot begins in the fictional world of Vaiya (which, at first, looks like it could be a lush reimagining of Hallownest). During its annual celebration of The Guardian, a mysterious force attacks, leaving Vaiya in danger of collapse.

After this grim introduction, players are placed in the shoes of a red-robed wizard named Soli, who must navigate ten unique worlds to save his home. Each level is replete with all the complex puzzles and branching pathways that are the hallmarks of these types of games, and at first, it might look too familiar to stand out.

Chalking up Unbound: Worlds Apart as a stereotypical platform adventure would be inaccurate though, and once taking control of Soli, it doesn’t take long for any lingering sense of deja vu to dissipate. To solve puzzles and make progress through Unbound: Worlds Apart’s labyrinthine levels, players must open portals by holding down a shoulder button, which superimposes a circular window over the environment.

While standing inside a portal, Soli can use different skills—like reversing gravity or slowing down time—that allow him to clear obstacles and complete quests that are otherwise impossible. The portals function like a single core mechanic that enables several more compelling mechanics to be added as the game progresses, building a sense of anticipation to see which abilities Soli will gain next.

“Each portal gives the character a different ability for a specific area in the game,” Craitoiu says. “For example, there are portals that can turn the character into a stone, or it makes him smaller, or allow him to play with gravity. The portals are gradually introduced to players by solving simple puzzles or challenges to learn how they work, and towards the end it increases in difficulty, making the player think and react very fast.” 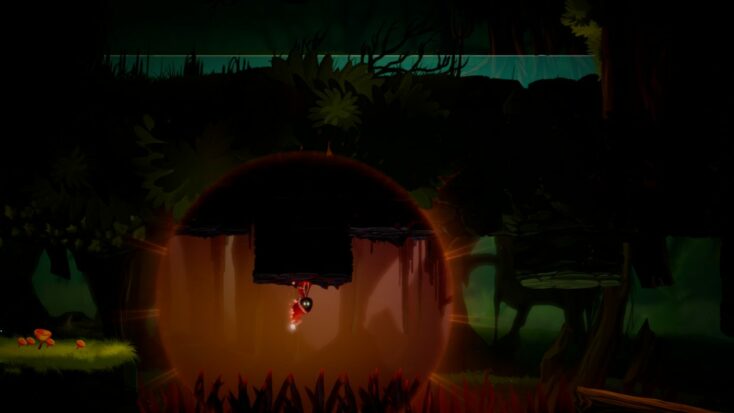 However, while the portals are essential to Unbound: Worlds Apart, they did come at a cost to another area of the game. Given the complexity of animating them in conjunction with combat, the team was left with a major decision to make; figure out a way to make them work together, or double down on building the game’s identity around solving puzzles by tearing holes in the fabric of time and space. Ultimately, rather than compromise the game’s most original hook, they took the less is more approach.

“We didn’t find a good way to fit the combat with the portal to feel right,” Craitoiu says. “Since the portal was the unique selling point and the main mechanic of the game, we decided to drop the combat.”

This was a bold move but one that could be described as addition by subtraction. It forces the player to think outside of the box, and without the choice to fight, clever timing with summoning portals is often the only way to bypass enemies. Monsters still present an element of danger, but in many ways, they’re simply obstacles to avoid rather than to conquer. Considering Soli’s demeanor is much more endearing than intimidating, the brains over brawn approach is arguably more thematically fitting too.

Something that wasn’t a limiting factor in Unbound: World’s Apart’s development was Unreal Engine 4. According to Craitoiu, it offered several tools and functions that made life much easier for their three-person team. The engine’s flexibility also allowed for a level of customization that directly affected how the game’s portals work. 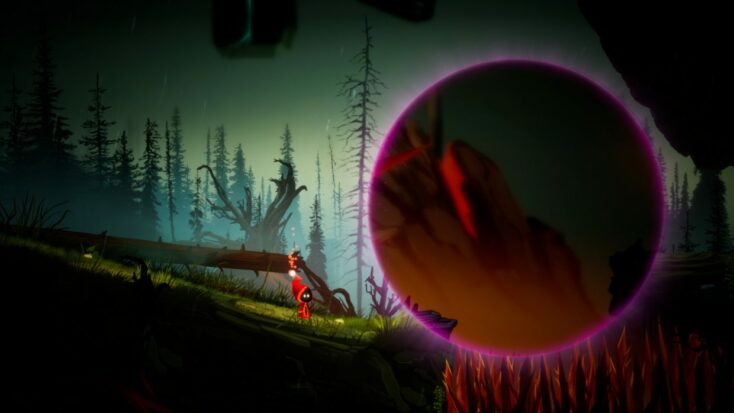 “The materials and shaders were really easy to create in Unreal,” Craitoiu says. “Development was faster thanks to the Blueprint system used for prototyping. Also, because the engine is open source, we managed to create a custom renderer inside the engine and improve the portal effect performance.”

Unbound: Worlds Apart was made possible in part with grants from Epic. Alien Pixel Studios applied for funding from the company twice and was selected as a finalist each time. Not only did this provide the studio with much-needed financing to complete their work, but it also gave them a massive boost in confidence, validating their vision while making it possible to more fully realize their vision for the game.

“Unreal Dev Grants was the first investment that we received back in 2018,” Craitoiu says. “It was amazing to receive it because it motivated us, and we knew that we were on the right track. Also, the money we received allowed us to prepare a good Kickstarter campaign. Then we received an Epic MegaGrant in 2020, because the game grew in scope and demanded more resources. That allowed us to outsource some art and music.”

The response from players and critics alike has been warm thus far, and future updates may bring further enhancements, such as selectable difficulty and enhanced animations. If players want to explore Unbound: Worlds Apart’s labyrinthine portal-based levels for themselves, the game is available now on the Epic Games Store, Steam, Good Old Games, Nintendo Switch, PlayStation, and Xbox.

“I hope that players will have a great time playing Unbound: Worlds Apart and appreciate the amazing art, story, and atmosphere of the game,” Craitoiu says. “The game has lots of characters, quests, and secrets waiting to be discovered . . . and interesting mechanics that will keep the player hooked.”