To my adversary in disguise, I have one question: what part of “I’ll handle it!” did you not understand?

As Nintendo continues exploring co-operative dynamics in online environments, with The Legend of Zelda: Tri Force Heroes in 2015 and now Metroid Prime: Federation Force this year, I’ve grown accustomed to troll-like behaviours — teammates chucking stacked partners into fire pits, halting mission advancement out of protest and the like. Surprising as it is for me to acknowledge, I’ve invested a considerable amount of time into Federation Force‘s campaign — surprising in the occasional hits among its hit-and-miss entertainment value. Presently, I’m sitting at 61 Medals, with five to go before achieving full completion of the main campaign (30 away from mastering Hard Mode). Missions I have yet to perfect rely on having teammates that are in sync, not so much for reaching time objectives but for performing bonus tasks — some of which may still leave you Medal-less if you don’t also concentrate on point bonuses.

‘Containment,’ the game’s fourth mission, is one I still need to acquire a third Medal on, because of its frustrating task of sealing two Ice Titans in a single container. I was able to pull it off once, but then a player decided to continue attacking enemies rather than race for the exit, which ensured our failure with the time objective.

One mission that’s bugging me is ‘Slipstream’ (Mission 16), one of several where players need to instinctively adopt roles. Here, some can guide spheres to catapults; others can remain towards the front and focus on destroying bombardments as well as flying enemies that plant exploding spheres. Such scenarios are where the game is normally at its best (other examples include ‘Phantom’ and ‘Mother Lode’). The thing about Slipstream is, progress can be ruined in a flash by an over-eager teammate or a lack of communication (programming messages such as “I’ll back you up” can be of assistance here). 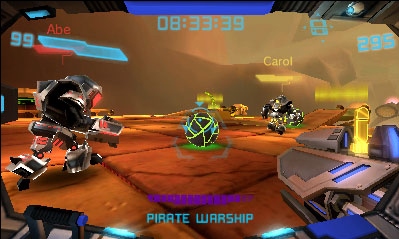 I always prefer being the sphere roller, but when I spot a dropship approaching, I fire exactly four missiles before proceeding. Once I get a rhythm going and there’s an unspoken understanding that I will, say, escort spheres along the right wing of the aircraft, I don’t take kindly to interruptions — hence why the “I’ll handle it!” message is a must for me. But good grief, a recent attempt to claim the final Medal left me wanting to blacklist someone for the first time.

“Assassin” they were called, and true to their name, the player was a major hindrance to the team. When it seemed like we were moving towards a level of consistency, this one player was actively going against the process by firing at the same sphere as another competent player, before switching to a sphere on the opposite end (mine) once they realized they botched the delivery of the first. Indications of upset — to the effect of sarcastic “Thank you!” messages paired with friendly fire — failed to dissuade them from their rapscallion ways, even using ill-advised charge shots as spheres scaled ramps.

By this point, I wanted a cease and desist option (“Stop!” or “Go away!” would’ve best translated my feelings, but I would’ve settled for “Wait!”). Of course we failed the mission completely, but because I was the top-scoring player, I at least secured a single MOD (ability booster) as consolation for that player’s disruptive behavior. I couldn’t figure out how the Blacklist option worked so I could block them, and I was too annoyed to stay with that group any longer.

It’s for this reason that I prefer a two-player session for this mission, since there’s less risk of tripping over one another, but it comes with the caveat of lessened point totals due to the lower player count. Anyway, after my bad experience, I think I’d rather take a stab at ‘Containment’ again and leave ‘Slipstream’ for the end —but who’s to say there won’t be another menace waiting for me.

Gwent is the Boxing of Card Games