Label has to be tired. Since her debut in Animal Crossing: City Folk nearly fifteen years ago, she has been grinding. With the launch of Labelle, her independent fashion label in March of 2020, the style savvy porcupine has brought couture to the coastlines. Island residents participating in real estate mogul Tom Nook’s “Deserted Island Getaway Package” can’t stop babbling about the versatility of the Labelle brand; casual tees, formal dresses, plus socks and hats to match. However, Label wasn’t born into the jet-setting life of an indie designer on the rise. Her desire for success in the fashion world meant pawing her way from humble beginnings to new horizons. In reflecting on her life over the past decade and a half, parallels emerge between the ups and downs of her career and the realities of seeking success as a young creative growing up across the ‘00s and ‘10s. Label’s wares may be sold in a pastel paradise, but the stomach of Industry grumbles ever loud, hungry to consume and commodify all forms of art, even art that is worn.

Born to a pair of tailors, Label dreamed not of taking over her parent’s tailoring shop as her sisters would come to do, but instead kept her eyes peeled on the big city. Label’s modern, individualist attitude led her to turn her back on a traditional path toward working her family’s store. Instead, she took her future into her own paws. Or rather, placed it into a very famous pair of hooves. Securing a coveted spot as Gracie’s assistant under the new, chic moniker, Labelle, was a veritable coup for a young ingenue eschewing rustic life for upward mobility in the fashion world. Situating herself at a high-end boutique like GracieGrace saw Label following advice we were all fed growing up in the ‘90s and ‘00s: land a job with a successful company and work your way up the ladder. It’s a strategy that isn’t completely obsolete today, but for creatives – be they artists, writers, designers, etc. – there are increasingly fewer entry level opportunities with which to enter a desired field.

After four years in the rat race and looking to resolve her issues with her family, Label followed in the footsteps of many young adults in the current economic era and moved back home. She worked the accessory department of the family store as her own design work took a backseat. Many creatives – myself included – can relate to working an unfulfilling job to keep the bills paid as you fill your free time with… more work. Creatively gratifying work it may be, but the grind of pursuing your creative passion in the off hours from retail weighs heavy. Without inherited connections, fewer and fewer apprenticeships or entry level opportunities exist with which to wedge your beak into the door of your desired field. If you want to pay your rent, you need to build a market for yourself and commodify your art into a brand. What’s more, it’s not enough to simply build a brand, you have to be a brand. Which is just what Label did. After nearly a decade at home, she left Able Sisters once more and launched Labelle. Named after herself in homage to her origins in the fashion world, she shifted her tactics to a more grassroots approach to marketing. 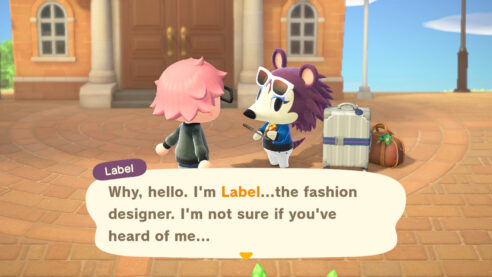 Traveling from island to island, Label solicits residents to model ensembles for her in a style of “fashion check” similar to her former mentor, Gracie. From these assessments, she draws inspiration for new items in the Labelle line. In return for their time and efforts, residents who participate get an exclusive sample product, as well as vouchers encouraging them to visit Able Sisters where the full color range of the sample product will be on sale the following day.

This tactic of advertising by creating relationships with stylish individuals and distributing through a small, family-owned business invokes the “reverse pyramid model” of brand legitimization in New Horizons. “The model breaks from the established business and brand logic as it generates access to desirable products, taste, knowledge, and community in order to create economic value.” Like Telfar, Labelle is “for everyone” as some Labelle garments do cost a few thousand bells, but they are still half the price (or less) of her mentor Gracie’s clothes. Telfar bags aren’t cheap, they’re affordable, and the Labelle label follows suit. Adhering to the reverse pyramid model and lower prices situates Label on a similar trajectory to brands like Telfar which similarly emphasize accessibility and affordability.

Label has her would-be muses dress up to spur her inspiration, but what materially occurs is a transaction of influence. You prove your mettle as a person with style and access, she gives you a sample of her product, you model the product for your neighbors around the island, then they go and buy it at Able Sisters the next day. Of course, the analogy isn’t perfect. The player’s animal neighbors don’t make their own purchasing or wardrobe decisions outside of deciding to wear custom designs the player displays at the Able Sisters shop. New Horizons works to center the player’s aesthetic choices more than any previous title, so it follows that the Island Getaway settlers wouldn’t wear anything the player hasn’t designed or given to them. However, Animal Crossing has always been about textual, metaphorical, and metacommentative blending and blurring. Settlement on a “deserted island” occurs, Tom Nook explains it away, the player does the actual management as both colony leader (read: Resident Representative) and landlord, and so on. The player performs politically and/or economically charged motions which are varyingly abstracted from those ideologies and never get in the way of the very real fun of creating the island diorama of their dreams. Such is the case with the receipt and distribution of Labelle garments. Whether or not we see Label’s yearly earnings, her desire for the success of her brand has brought her to the modern influencer model of commerce. 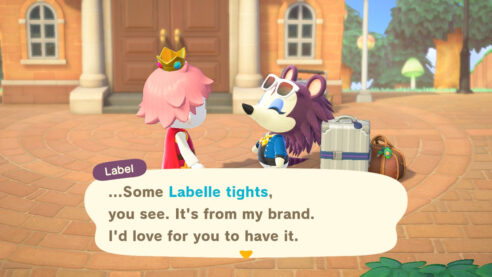 Label’s turn to influencers aligns with Nintendo’s efforts to rake in bells through New Horizons‘s systems which encourage the player to use their spheres of influence to market their products. New Horizons encourages players to chat, share Happy Home designs, and more through the NookLink feature on the Nintendo Switch Online App via smartphone or tablet. Predictably, other Nintendo products appear as you click your way towards the desired Animal Crossing features, reminding players of other IP including Splatoon and Smash Bros. they can purchase. Players can also help Nintendo market New Horizons by earning in-game rewards in the form of Nook Miles for taking screenshots which can be easily shared thanks to the Switch’s quick and easy posting functionality. This read on the game’s online and sharing features is a cynical one and relies on players following through with engaging with the systems to begin with, but as every social media platform has seen from the game’s launch to today, Animal Crossing is an SEO dream that moves consoles and profits. In promoting her designs, Label becomes one more facilitator within the game encouraging the player to assemble more outfits to show off online, therefore pushing the wheels of marketing forward.

Perhaps on her upward trend, Label will also become an SEO dream, and like Telfar, get a shoutout on a Beyoncé album. One can only dream of such clout and the profits it yields. The ultimate marketing boon. Fashion, more so than illustration or the art of performance, inherently needs marketing to survive. Outside of individual garments created as individual texts, designers want their artwork to be worn by consumers and thus the word needs to get out. The progression of Label’s career not only echoes the gradual shift from traditional employment to individual brand entrepreneurship, but reminds us that everything we do from taking pictures, to modeling an outfit, to profiling a designer can oil the gears of commerce and market a product. Alexander McQueen said “Fashion should be a form of escapism, and not a form of imprisonment.” For designers like Label, their work should be free from the hunger of Industry, not confined within cycles of marketing which reduce their works from textile expression to currency for clout.

The Horror of Finding a Home