Playing a Yakuza game for the first time feels a bit like experiencing magic in slow motion. I recently started Yakuza: Like a Dragon and have not only been pleasantly surprised by how fun its gameplay mechanics are, but also in its ability to shift in tone and feel at the drop of a hat. While there is much to be said about the ways in which the series successfully toes the line between prestige drama, soap opera, slapstick sitcom and shounen anime banger, what really sticks out to me is the game’s ability to lean into the friction that exists when deploying political statements into the narrative.

The game follows Kasuga Ichiban, a man who was taken in as a yakuza in his youth and later asked to take the fall for a crime he didn’t commit. After some major revelations at the end of Chapter 2, Chapter 3 opens just as Kasuga Ichiban awakens in a pile of trash outside of a homeless encampment in Isezaki Ljincho, Yokohama. Using folks experiencing homelessness as set dressing is nothing new in videogames. Play any open-world game with some kind of cityscape and you’re bound to find at least one person experiencing homelessness that is named something like: “town drunk,” “unnamed bum,” “vagrant,” or something of the Iike, so I was curious how the game would handle Ichiban navigating these spaces. To my surprise, it handles it with grace, providing humanity to a lived reality seldom given the care it deserves in this medium.

I began to notice that Like a Dragon would handle its political leanings a bit differently than other games once it introduced Nanba, a former nurse who is now living within the homeless encampment, who is Ichiban’s saving grace – bringing him back to life after a nearly fatal gunshot wound. Nanba is Ichiban’s guide into the ways of living as a person experiencing homelessness, this is also reflected in the various gameplay mechanics introduced in this section that task the player with searching for loose change under vending machines, collecting cans to sell and even visiting an unemployment office seeking work.

While you can imagine that this kind of subject matter would lead to a fairly dark and gloomy presentation, Like a Dragon finds levity in presenting this scenario while also not straying away from acknowledging the hard truths that living as a person experiencing homelessness entails. A scene that speaks to this involves Ichiban confronting local mobster cronies who come to collect money from the people living in the encampment every month for living on the land. Ichiban confronts the mobsters and after a turn-based battle that gives you your first comrade in the form of Nanba, you drive out the mobsters from their collection and save the day. This is classic shounen anime fare at its finest, but the moment that follows is a 180 that at first might seem a bit at odds with the tone preceding it but the game utilizes this paradigm shift to make its statement resonate. 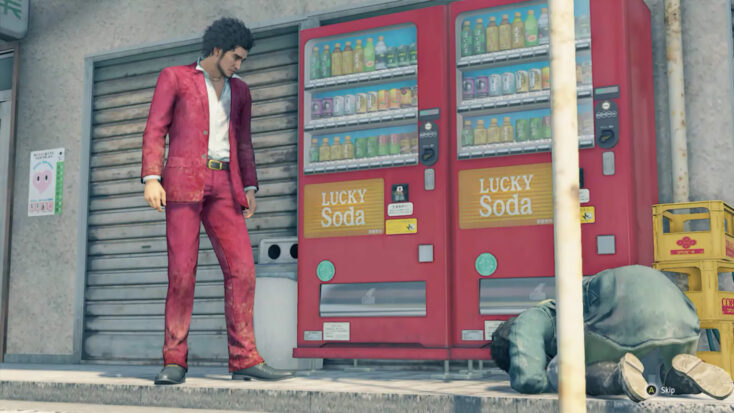 Upon beating the mobsters, Ichiban goes on a diatribe that can be reduced down to, “Why won’t these homeless guys just pull themselves up by their bootstraps and get jobs? They have skills!” Nanba retorts by calling Ichiban out on his reductive argument and speaking to the various traumas people facing homelessness are dealing with on a daily basis, how it’s not as simple as getting up and going to work for them.

I appreciate this scene because it drives conversations around homelessness away from tired arguments based on merit and skill set to get out of a precarious situation and instead refocuses the player on the reality of the situation. Just because you are equipped with a certain skill set doesn’t mean that the various life experiences you’ve faced will make it easy for you to utilize those skills in trying situations. For some gamers, this might be the first time they’ve been able to imagine that getting out of homelessness is more than finding a job, especially when facing the varied ripples of how homelessness affects the relationships outside of the person in question. This moment is great because it takes up space.

Yakuza is a franchise that has the player running through neon-lit streets of various locales in Japan beating down everyone from businessmen to mobsters in over-the-top brawls. Like a Dragon takes this to another level with electric bats, pigeon swarm attacks and shellfish you can summon. But despite all of that, it still allows for moments like the one I described above to take up space in the narrative even if it’s at odds with the moment-to-moment gameplay. In a way, Like a Dragon uses the friction that some may call ludonarrative dissonance to elevate its message. It wallops the player with its political ideology while we are on a high from pummeling goons with our fists and bad breath. The stark switch in tone is what makes these moments resonate.

Yakuza: Like a Dragon explores a lot of topics that most of the AAA space in games avoid: homelessness, the effects of prison on individuals, sex work, to name just a few. Much like a creative nonfiction essay that uses segmentation, collage or a braided structure to juxtapose disparate parts of a writer’s reality or argument to make its statement, so too does Like a Dragon. This is a formal choice by game writer Masayoshi Yokoyama that elevates the game’s messages. There’s value in allowing politics to take up space in games, Like a Dragon is a testament to that.