The first time I saw a mosque’s minaret was on a childhood trip to Tunisia, the small North African country where my mother was born. It stood towering over our neighborhood, visible from nearly every home and street corner. From the narrow windows of its parapets would periodically emit the tinnily recorded sounds of the Muslim call to prayer. The long, poignant wails would bounce above the neighborhood’s rooftops and ping pong down its alleyways, finally reverberating within our bodies, wrapping us in a welcoming, if somewhat alien bubble of pious melody.

The next few times I saw minarets was when they served as backdrops for the military first-person-shooters I was playing back in the States. In these games, minarets were represented as sharp silhouettes, standing stark against reddish brown horizons. Rows of jagged, piercing teeth thrusting up behind bombed out shanty towns populated solely by brown bearded men in keffiyahs and camouflage, pulling Russian-made machine guns from their overladen utility vests and shouting at my avatar in terse phrases of staccato Arabic. The compressed sound files of their clipped exhortations would stack on top of each other, overlapping into unintelligible cacophony as their inexhaustible numbers poured from hidden alleys and darkened doorways, kicking open boarded up windows to poke their bristling weaponry out.

The language they spoke, Arabic, was thus snatched from my mother’s tongue and that of her extended family and transformed into the guttural, beastly retorts of an enemy horde. In the lexicon of games, enemy shouts are often called “barks,” which perfectly captures the dehumanizing flattening of identity and language that happens within these abridged digital representations. Their language became stretched, hammered thin and abstracted into pure aesthetic texture. As a result, the figures appearing at the far end of my iron sights ceased to be human. Not living and breathing, nor housed in flesh and blood, but reduced down to simple signifiers of distasteful menace, foreign bodies screaming incoherently as they were cut down and cleansed from the system.

My mother once walked in on my brother and I playing a PlayStation game called SOCOM: U.S. Navy SEALs, which includes a series of levels where your heroic SEAL team invades the majority Muslim country of Turkmenistan. She interrupted our session, extending her arms plaintively at the television screen, a freshly wrung rag dangling from one of her hands, beseeching us, asking why we were “killing our people?” 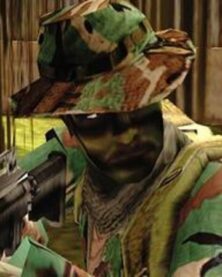 We didn’t really have an answer to this. We mumbled something about it just being a videogame, avoided her incriminating stare and kept our eyes glued to the TV. We continued playing in a guilty haze, continued manipulating our little soldier avatars, squeezing down on the virtual triggers of our military issue weaponry. We allowed ourselves to be swept up in the mechanical pleasures of its shooting gallery feedback loop, all the while ignoring our mother’s accurate deconstruction of the game’s grisly semiotics.

On the last page of SOCOM’s game manual there is a recruitment ad for the real-life Navy. Here, in bold type, capped by a 1-800 number and an invitation to find out more, was a clear reminder of what we were actually participating in. Games like SOCOM didn’t pay the same lip-service to Liberal hawkishness as other popular military shooters. Its signposts were therefore impossible to miss, along with the implications it cast on to the wider genre: SOCOM was a reminder of which side we should consider ourselves on, should sign our lives away in service of, as well as which side whose lives and futures we should automatically consider meaningless and forfeit.

As much as games like SOCOM reflected much of the media that influenced our understanding of the world, it was thankfully only a portion of what we experienced, growing up as we did, between worlds. Through the portal of my mother and her family in Tunisia we were also allowed a clear view into a very different universe. It was a view which was not soaked in rust-colored tint, or soundtracked with menacing orchestral measures, but simply unadorned, witnessed through our own lived experience. Summer would take my brother and I to the same climates and architectural configurations we would otherwise spend hours roving through as leather-necked special forces operatives or as grizzled, cigar-chewing mercenaries. Instead of heavy boots and desert camo we’d be clad in crisp Bermuda shorts and fresh-from-Payless sandals digging into our ankles. Instead of barreling our way down trash strewn alleys or squeezing shots over the counters of deserted tea shops, we’d take a walk to the local beach and snatch bites from Brick à l’Oeuf, piping hot egg pastries, washing them down with stiff gulps of mint tea with pine nuts.

Our vacations were still plagued by the undeniable unease of visiting a place still foreign to us. My brother and I couldn’t put this fact aside, sitting at the edge of family gatherings where the words floating above our heads were being spoken in a language neither of us had any hope of understanding. The angry barks of those virtualized Arab soldiers had this much in common with the textured and lively conversations we couldn’t help but feel shut out from. All the same, we still understood that we were with family; we were joined with this group of people who, despite their unintelligibility, were very much a part of ourselves.

It was a contradiction we had to swallow, and perhaps was at the core of the dilemma my mother was staring down, pointing a hurt finger at the TV full of irredeemable, incomprehensible imagery. Here we were, killing a part of ourselves, shielded from understanding the very words they gasped out as they were gunned down. We were protected, somewhat, by steep walls of assimilation, walls which our mother could not herself, with her broken English, her attachment to the beaches and family gatherings she had left behind in Tunisia, ever hope to clear.

For us, the prospect of assimilation opened its arms in warm welcome. It let us sample its ideologies and partake freely in its recruiting tools. We could allow ourselves to fall into its comforting embrace, fall as far, and as long as we were willing. Provided, of course, that we ignored the Arabic words escaping the dying lips of the men our cornfed grunts stomped glibly past. Foreign men, who looked like us, but who we could not understand, nor could never truly be.

King of All Monsters