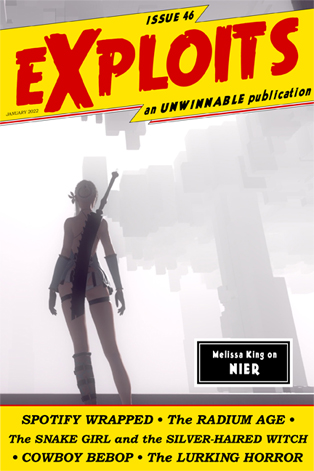 This is a reprint of the feature essay from Issue #46 of Exploits, our collaborative cultural diary in magazine form. If you like what you see, buy it now for $2, or subscribe to never miss an issue (note: Exploits is always free for subscribers of Unwinnable Monthly).

In 2010, Square Enix released Grimoire Nier, a compilation of lore, interviews and short stories building on the original Nier Replicant game. One of those stories, “The Lost World,” was intended to be an ending in Replicant, but it became a Grimoire Nier short story for the time being. It later became the basis for Ending E in Nier Replicant ver.1.22474487139…, the game’s 2021 “upgrade.”

While its fundamental concepts existed a decade before its release, Nier Replicant’s Ending E needed Nier: Automata to exist before it could truly thrive. It builds on the themes Automata established in its endings to solidify both games’ messages of defiant love.

The original Nier Replicant presents you with two final endings: C and D. In C, you choose to let Kainé die, while D has you delete your save files to save her. Director Yoko Taro mentioned in a Grimoire Nier interview that those choices were meant to reflect how the player felt about Kainé, leaving her at your mercy. In Replicant, you’re the arbiter of Kainé’s fate – she has no say in your decision.

Fast forward seven years to Nier: Automata. By the time you’ve finished Endings A, B, C and D, you’ve watched the main cast suffer through the game’s events and die. As the credits roll for the last ending you watch, 2B and 9S’s support pods directly ask you – the player – if you’ll accept this fate. Should you choose to help the pods change their android companions’ stories, you “hack” into the credits with the help of other players to give Nier: Automata’s characters the chance to be happy. Automata’s final ending is more about liberation than arbitration – specifically, liberating the characters you’ve grown attached to throughout the game.

Four years later, Nier Replicant ver.1.22474487139… presents the same endings as the original, plus the new Ending E. A few years after Ending D, everyone has forgotten about the main character, Nier, because the player deleted his existence to save Kainé. As she struggles to remember someone lost in her memory, she comes across the supercomputer network responsible for creating replicants. She fights the forces that oversee the network and brings back a younger version of Nier using their technology.

In this ending, Kainé takes the place the player had in Automata’s Ending E. While Replicant’s Endings C and D put her in a place of disempowerment, the new Replicant Ending E gives her the power to liberate the people she loves. Just as you say “no” to Automata’s original ending, Kainé denies the fate given to her found family by reuniting with her fellow tritagonists, Nier and Emil. Death, apocalypse and conflict be damned.

Throughout Replicant and Automata, you see plenty of instances of this “defiant love” I mentioned. Nier would do anything for his sister and friends, whether or not there’s a Shadowlord making the Shades more violent. Despite memory loss and professional duty putting a barrier between them, 2B and 9S do what they can to support each other.

But, before Replicant’s Ending E, the player had to intervene when problems spiraled out of the characters’ control. Kainé is the first character to get that degree of power through the bonds she, Nier and Emil built during the game. Replicant’s Ending E ties all of Replicant and Automata’s defiant love together to show the importance of the people you care about when you’re up against a system you can’t control.

The world may be fucked, but we have each other. And we’ll always have one another’s backs.