“Welcome home, hero.” The phrase splashed across the opening pages of the New York Comic Con edition of Den of Geek magazine hits me right in the chest. In another life I was an ad copywriter. “Fuck that’s good,” I mutter into the wedge of my KN95 mask while skimming the rest of the letter from ReedPop’s Event Director. I wonder if she came up with it or if it’s the product of a more cynical process. If it was workshopped or if it came to some junior employee in a casual bolt of inspiration à la Peggy Olson’s “basket of kisses” after the Belle Jolie lipstick testing session in the first season of Mad Men. While doing my due diligence for this piece I’ll discover ReedPop’s been using the line since at least 2018 and I just never noticed, but I’ll be damned if it doesn’t hit different this year.

In the eight years I’ve been attending NYCC, Thursday has always been my favorite day. The crowds are at their lightest. They’re especially lean this year, no surprise, and even though the whole of the show floor is being utilized, the aisles are wider and there’s a giant LAN arena taking up the space where one of the major publisher’s booths would normally be. No major pubs are here at all which definitely throws off the vibes. Even Funko decided to pass, though plenty of exhibitors have stacks of pop vinyls at the ready for perusal and purchase. There’s no escape from those dead-eyed totems. 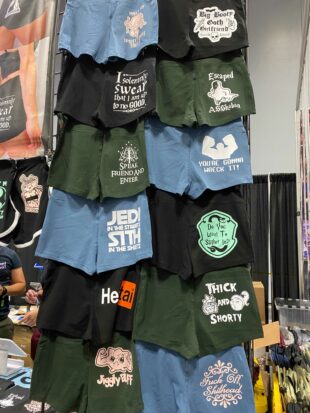 The beginning of my sweep across the show floor has me feeling unmoored – this is the first major public event I’ve attended since lockdown and I’m paradoxically overwhelmed by both the crowds and the emptiness. This doesn’t feel like New York Comic Con, I think. But as I move through the space, I begin to ignore the forest for the trees. There are silver-haired dudes manning single and double booths packed with crates of yellowing comic issues, beat-up hand-lettered signs proclaiming they’re buying as well as selling. A vendor displays handmade skater skirts with allover nerd prints (and pockets!), another sells booty shorts with sayings like “Jedi in the streets, Sith in the sheets,” “Speak friend and enter,” and “Do you want to Slyther in?” printed on the cheeks. I clutch my lanyard, feeling each of my 38 years, then laugh. Was this stuff always here and I missed it?

I only scheduled one panel for myself today, the Battlestar Galactica retrospective with Edward James Olmos and Mary McDonnell. The two actors still have a warm chemistry. McDonnell explains that during the beginning of the pandemic, “Ed,” as she calls him, was one of the only friends she let visit her in person. Olmos plays gruff at first, but both seem genuinely delighted to be in front of a crowd and even though we’re in one of the largest auditoriums in the Javits Center, they tell stories as if we were all lounging in some Brooklyn backyard with drinks in hand. They even wax philosophical. “You’re all gonna die someday,” Olmos intones while sweeping his index finger across the crowd, “you’d do well to remember that.” He says there are lessons to be learned about living from the way the world is today and from Battlestar. He thinks we’re at an advantage because we love Battlestar. At the end of the panel the moderator finishes up his goodbyes with a “so say we all” and Olmos takes the mic, goes full Adama and pushes a full-throated “SO SAY WE ALL” through the speaker stacks. Hundreds of people answer “SO SAY WE ALL” in unison and one single sob explodes behind my mask. I’m startled by the deliciousness of being in sync with everyone else in the room.

The escalator up to 35th Street from the Hudson Yards subway station is 125 feet long and not working. Three people in front of me look up toward the top and turn heel to find an elevator. I ran the NYC Marathon three years ago so I should be fine. Never mind that my physical exertion the past year and a half has been limited to moving from my bed to my sofa and back again. I should be fine.

Halfway up I’m questioning the choice to even leave my apartment this morning. Three-quarters of the way and I’m done. I stop and turn around to apologize to the teenager behind me. “Are you kidding? I felt like I couldn’t stop because no one else was.” She rests with me a moment before passing on the left to continue upwards slower than before and a smidgeon of my pride is restored. I lower my mask to take a hit of my inhaler and move it back into place before a man in a Superman shirt asks if I’m ok. I assure him I am now and continue upwards slower than before.

There’s something about these two (mainly the accents) that makes me think they’re locals. I noticed yesterday that a lot of my fellow attendees felt like locals. Between ReedPop’s limited ticket sales, their strict vaccination requirements and all the various air travel mandates I can imagine some regular out-of-town con goers might have decided to skip this year. No shade to out-of-towners, of course. I’ve long since earned my local status from living here a decade but like many New Yorkers I’m originally an out-of-towner myself. 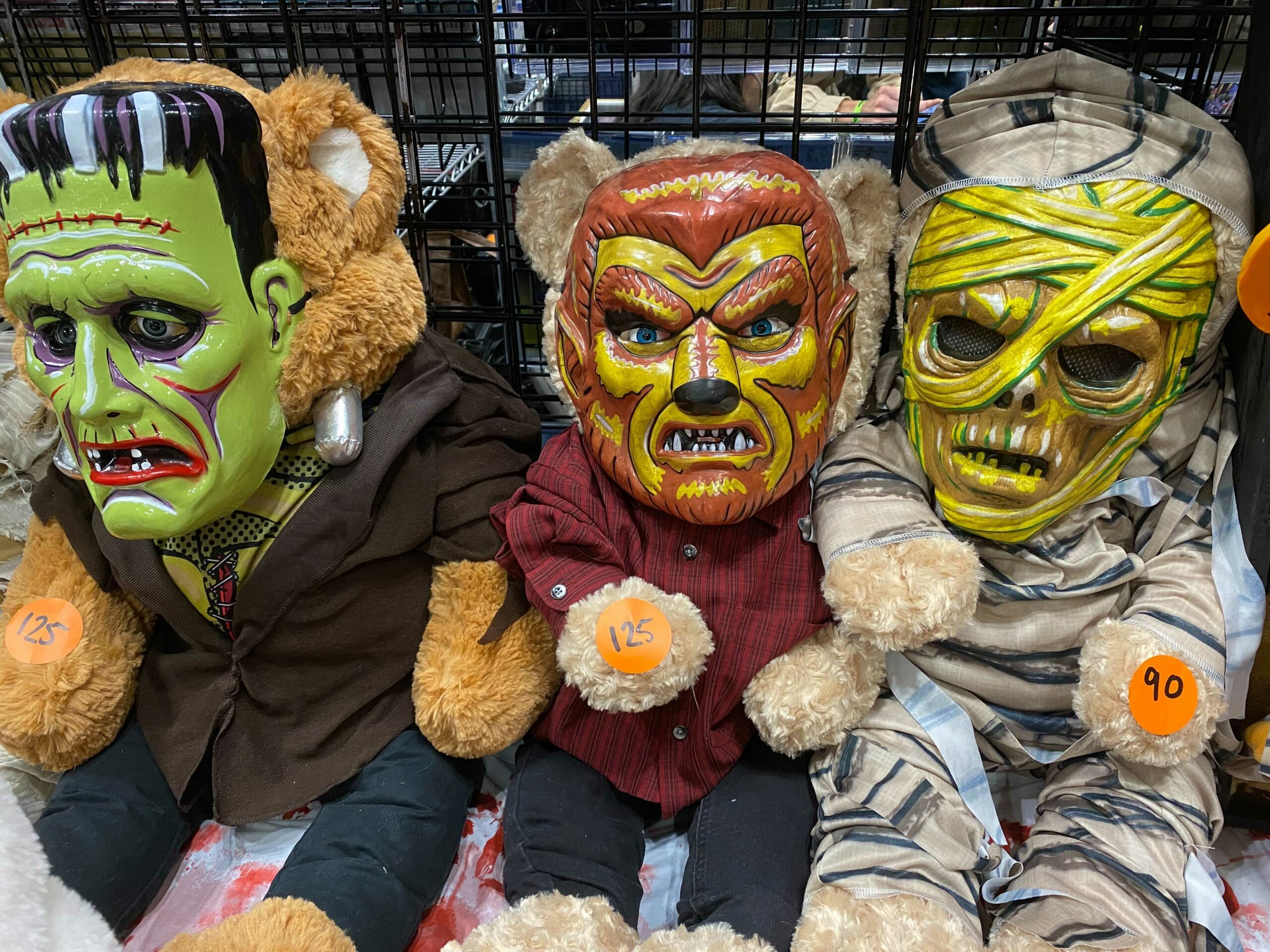 Single-day tickets were still available for sale earlier this week, which I’m sure doesn’t bode well for ReedPop’s bottom line this year. But strolling around the parts of the show floor I missed yesterday with all these seem-to-be locals and seeing even more quirky exhibitors (Leather-wrapped steampunk goblets! Baby Yoda oven mitts! Teddy bears dressed up like Frankenstein’s creature, The Wolfman and The Mummy! A $225 framed and matted tribute to Chips?) makes me wonder if this first NYCC on the other side of the pandemic hasn’t accidentally moved closer to the first iterations of the convention. I feel like if I squint I can almost (almost) see what it was like to be at the con before the MCU dominated multiplexes and premium subscription streaming services. A little less crowded, a little more fan-made passion readily displayed, more chances to let people show off their New-York nice (it’s brusque but real). Maybe this doesn’t feel exactly like New York Comic Con, but it sure is starting to feel like New York.

I Know You Are but What Am I?

The Best of Worlds