I come in search of monsters. This October we’re doing a theme issue on monsters, you see, and since my October column is invariably about New York Comic Con I need to figure out a way to force this square peg into that round hole. There are plenty of monsters to be found in pop culture, of course, and since NYCC always takes place the first weekend of October they’re especially present here at the con. I vow to keep my eye out for monster and/or monster-adjacent stuff to photograph so at least my pictures will be on theme even if my text is not.

Now I’m imagining you asking aloud, “hold on, am I reading last month’s issue?” Not to worry, dear reader, you have not gone through a rift in the space-time continuum only to find yourself reading an issue of your favorite digital pop culture mag you’ve already dutifully devoured on publication day a month ago. For as I begin my methodical first-day sweep of the main show floor (I must walk up and down each aisle at least once – no FOMO allowed at my NYCC) I start to think too much about monstrosity and monsters and what it really means to be one and I realize I just don’t want to spend my con in that headspace. There have been so many human bad actors in the comics and pop culture spaces recently that focusing on the zombies or vampires or supernatural slashers or fell beasts or whatever seems almost childishly pedestrian. Besides, I didn’t get a reservation to the Jamie Lee Curtis panel to hear her talk about her final showdown with Michael Myers and even if I had, it’s Laurie Strode’s journey I’d be most interested in, not the monster’s.

Despite my own cynicism often getting in the way, New York Comic Con has always been a place where I find a lot of comfort. I’ve always been one to indulge my inner child, even when I still was one, watching shows and playing with toys that were “too young for me” up until I was a teenager. (Please indulge me pretending as if I don’t still engage with those things.) At next year’s con I’ll be 40, and while there’s an easy layup of a joke about the putting away of childish things to make there, I’ve come to accept that immersing myself in the stuff I liked and still like is not a bad way to spend an early fall weekend once a year. 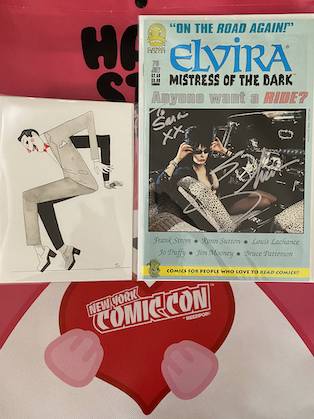 I’m old enough to see all the ways the con is designed to part fans with their money but hey, that’s capitalism, baby. That aside, I can’t discount the many creators who attend each year to make genuine connections with people who will appreciate their work, from the woman who makes skater skirts out of geeky fabrics to the family who’s amassed the largest collection of vintage enamel pins I’ve ever seen. A pinhead (no monster-adjacent pun intended) could do some damage at their booth. Which is to say this year and last they did some damage to my wallet after I visited their booth. And while I easily tend to part with my money each time I visit Artist’s Alley, I recently bought my first house and that extended wall space won’t fill up with original art by itself, thank you very much. Anyway it feels wonderful to give my money directly to a person who made the thing I ever-so-carefully need to slip into a rigid plastic sheath in order to make sure it survives the train ride home. These are the people I want to give my money to.

So, I waited to file my NYCC piece until the November issue because I didn’t want to worry too much about monsters. It’s not for lack of trying, though. I hunted for monstrous merch. I met Elvira. I went to a panel on the new television adaptation of Anne Rice’s Mayfair Witches to try and drum up some monstrous energy but as I waited in line to be let into the main stage I kept thinking, are witches monsters? Historically speaking, they’re usually just women who men are afraid of for one reason or another. The witches on the show deal outright in the supernatural, sure, but I’m still not sure that makes them monsters. The producers at the panel talked a bit about the new Interview with a Vampire adaptation as well, and the one thing they kept coming back to again and again regarding both shows was the characters’ humanity. “A vampire is not not a human. A witch is not not a human,” one said. As storytellers, the monsters we make are so often just mirrors. I’m happier focusing on a sunnier New York Comic Con reflection. There are enough monsters to be seen elsewhere.

Return with the Elixir

Everyone Has a Job: The Future of Silent Running (1972)