Sometime around 2015, my sister-in-law (known as Diabs around the way) and I were driving around Chicago, heading to brunch I think, and making some small talk, and she asked me if I knew who Lil Dicky was. At that point, I had seen his name in some threads here or there, knew he was a Jewish dude, but I wasn’t particularly familiar with any of his music. She put on something off his debut album, Professional Rapper, and I won’t lie, I was a little impressed. He was funny and lyrically touched with a gift of gab. However, despite my initial interest, he pretty quickly slipped off my radar.

Then, last year, he popped back up, but this time as a TV star in Dave. This felt a bit suspect to me still, but he had teamed up with Jeff Schaeffer who had done a good job making me giggle on Seinfeld, Curb Your Enthusiasm and The League, so I thought I’d give it a shot. It was nothing like I expected. Yes, there was rapping and gross humor, but Dave is also about mental illness and creativity. In the first season, Lil Dicky opened up about his botched circumcision, difficulties in living up to expectations and managing relationships while life changes all around you. It turns out, Lil Dicky can be thoughtful. 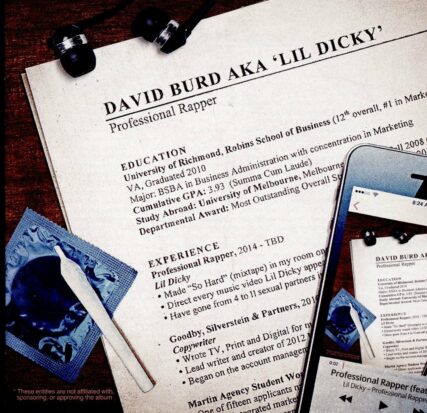 This may even be a bigger surprise given that one of Lil Dicky’s biggest influences is the man formerly known as Kanye West. Dave seems to see Kanye as a loadstar of perfectionism and artistic genius unmatched by any of his contemporary peers. While I may disagree with Dave on that front, Kanye’s influence on Lil Dicky’s music and stagecraft is clear. In the season finale of season two, Dave came back from an ad-break to dive directly into an extremely intricate stage show for Lil Dicky’s debut at the VMA’s, featuring a large cast, avant-garde costuming, an outlandish light show and (potentially) an actual corrective penile surgery. He blends the sacred and the profane, combining soaring angelic hymns and a crucifixion with heavy industrial beats and a verse about cunnilingus.

With Kanye’s newest album Donda dropping within the same month of Dave wrapping season two, I couldn’t help but notice the similarities in their approaches. But the sad thing is, after listening to Kanye’s latest bloated, self-aggrandizing opus, I think Dave is doing what Kanye wishes he could do. Now, I won’t say I hated all of Donda. There were some dope tracks on it, but the man needs an editor. He also needs to stop giving homophobes, misogynists and domestic abusers a platform through his work. There’s just no excuse.

Meanwhile, Lil Dicky is putting out stuff that is just as quality without the intense desire for controversy. In fact, he is out here putting a face on issues of mental illness and providing a platform for his crew to succeed.

Quick spoiler alert for the end of season two of Dave:

When given the opportunity to let someone else share the spotlight, Dave gives up control and let’s his hype man, Gata, get on stage at the VMA’s. He puts his desire for perfectionism, grandiosity and opulence aside in favor of handing his friend a mic and a place to shine. Can you picture Kanye doing the same? In fact, thinking back on it, Kanye never brought his crew. Biggie had Junior Mafia; Eminem had D12; Kendrick had Black Hippy. Where was Kanye’s clique? Jay-Z? Just Blaze? The people he succeeded were just vehicles for his success. They weren’t the clique he came up with. Anyway, this isn’t just a column just dunking on Kanye (look out for that next month). Really, this is about how good Dave is in comparison to one of Lil Dicky’s inspirations.

Maybe then, it’s more useful to compare apples with apples. Rather than comparing Dave with Kanye, it’s better compared with other TV shows. Often, Dave feels like a grosser Curb Your Enthusiasm or a more awkward version of The League, combining gross out humor with increasingly awkward encounters. But it’s often a bit more humanistic than those shows. Even when Lil Dicky is picking gum out of Benny Blanco’s butthole, there’s something humane about the closeness of the platonic friendship shared between these two heterosexual men. 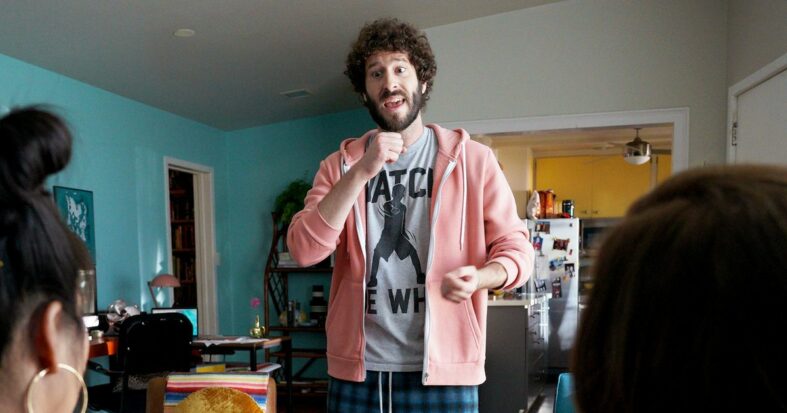 Dave is also deeply personal, diving deep into Lil Dicky’s neuroses, unpacking the ego behind his narcissism and perfectionism. It is auteur TV, revealing Dave Burd to the audience, with all of his flaws but also with all of his unique genius. In this sense, it feels a bit more like an insane Mad Men, even including an episode with an inspired advertising pitch for Mountain Dew. This is a show about a perfectionist who knows he is flawed and the struggles he faces with this contradiction.

Most often though, I find myself thinking back on an episode of It’s Always Sunny in Philadelphia. No, not the one where they get addicted to crack or set Dee on fire. No, Dave reminds me of the season finale of season 13 where Mac finally comes out of the closet and performs an interpretive dance for his imprisoned father and substitute dad, Frank. The creativity and elegance of the dance and the effusion of personal expression in the midst of a typically insane narrative (Frank’s face is stuffed with bandages by the end of the episode) strikes the same chords as a lot of Dave. Lil Dicky’s continued self-assurance echoes the self-confidence of Mac’s dance.

All this is to say, there is a personality to Dave that is grown out of hip hop but really enhanced by the televisual medium. Now, going back and listening to Professional Rapper with Dave’s voice in my head from his show, I have a newfound respect for his debut. No, it isn’t perfect and it’s sometimes awkward, but often it’s funny, inventive and heartfelt. And I think that’s what is truly inventive about Dave Burd as an artist. He truly contains multitudes and is able to express it all in a unique voice. I do think that he might make a better professional TV producer than professional rapper, but he’s pretty good at that too.

Greak and the Deft Power of Short Stories