This feature is a reprint from Unwinnable Monthly #140. If you like what you see, grab the magazine for less than ten dollars, or subscribe and get all future magazines for half price. 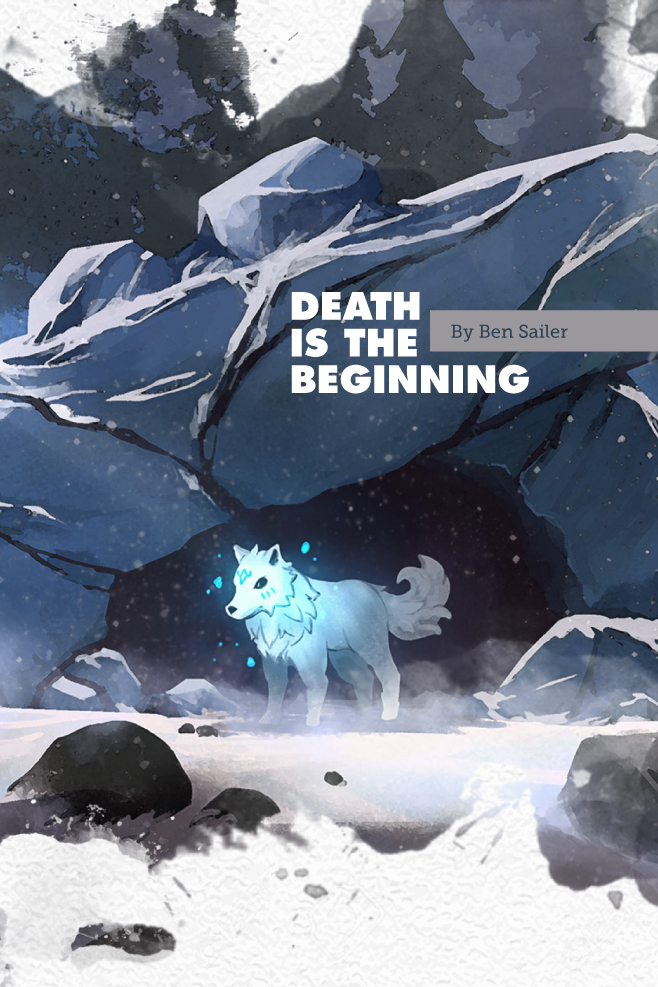 In most videogames, death is an endpoint, signaling that the player must try again. For first-person shooters it may mean respawning on the map. In the case of roguelikes, it could mean starting over from the beginning (albeit with ever-increasing accumulations of skills and supplies that make each subsequent attempt toward victory a bit easier than the previous run). Some titles may graciously offer extra lives or infinite continues.

In Path of Kami, however, death where the story starts.

The forthcoming puzzle-adventure and debut title from Orlando-based Captilight Studios tells the tale of Kazeyo, a wolf who has recently passed away, who must now navigate a perilous journey toward the spirit world. In order to succeed, he must work together with his ethereal friend the Wisp, who helps guide their travels. It’s a narrative about finding companionship while coming to terms to mortality, and discovering that the end of everything you knew may simply be the beginning of what comes next.

“On a personal level, I find it cathartic to write about as a means of reconciling my own feelings on death . . . most of my writing ends up being about death [laughs],” creative director and studio cofounder Deana Galbraith says. “Since Path of Kami draws strongly on Shinto mythology, I became interested in the way that humans, and sometimes animals, can become enshrined as kami after death. We know what that looks like from our side, but as a spirit, what would it be like to transform from a normal spirit to a god? What separates the two? This is my interpretation of what it might be like.”

Path of Kami started as a school project while Galbraith was at the Savannah College of Art and Design (SCAD). When she showed the game to Jose Beltran, he was easily convinced to add his talents to the title. He soon became the company’s art director and co-founder, which has since grown into a seven-person team (plus contractors). For a game centered around friendship, one could hardly write a more fitting origin story. 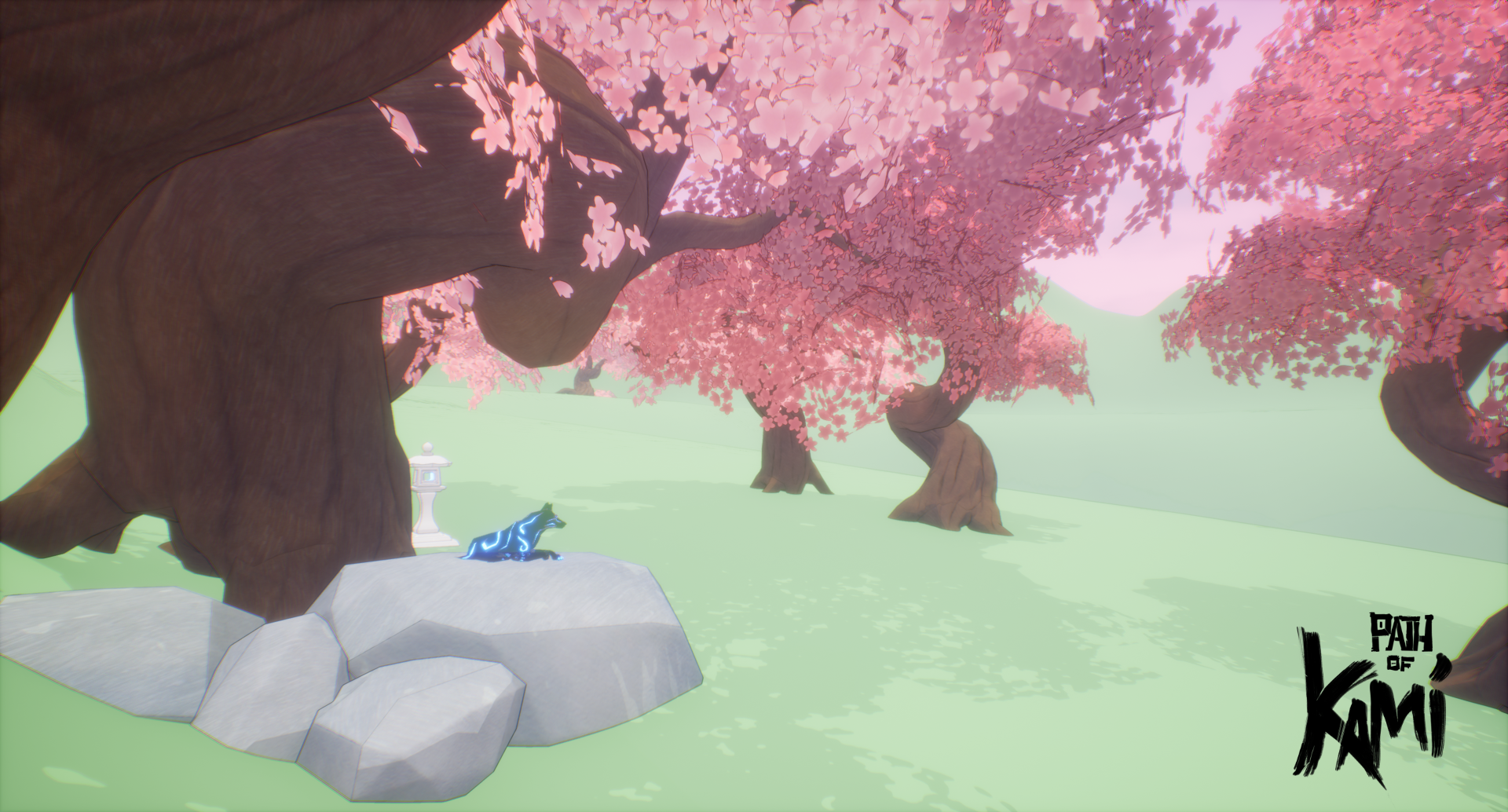 “We both have a passion for atmospheric art games and when pitching the idea to him he loved it and wanted to be a part of it,” Galbraith says. “Jose loves stylized art and has been the brain behind the entire art style of the game. He spent a good majority of pre-production experimenting and trying out different styles to get what we have today.”

Over the course of several design iterations, Captilight has pivoted from featuring an entire pack of wolves, to framing Kazeyo and the Wisp as the sole protagonists. In its current incarnation, the game is immediately reminiscent of the similarly wolf-centric classic Okami, sharing a somewhat similar aesthetic (minus the heavy ink outlining) and inspiration from Japanese mythology in its imagery and plot beats.

That inspiration is more than surface-level, and the Captilight team is taking care to ensure their cultural and spiritual interpretations are not inappropriately out of context.

“We had the chance to take a research trip to a Japanese museum together before COVID, and had another research trip planned for Japan, but then COVID happened,” Galbraith says. “We have postponed that trip but hope to go sometime next year. We have also been relying on our Japanese cultural consultants to make sure we are being respectful and accurate.”

While it would be easy to dismiss Path of Kami as Okami-lite based on shallow observations of its visual style, it would also be an erroneous assessment of the game’s creative ambitions. When asked about other influences, Galbraith lists some seemingly disparate titles that have served as guideposts not only for the game’s appearances, but also its mood and tone. Pacing and atmosphere matter as much as mechanics and visual style here, and the team is blending these elements into a unique experience. 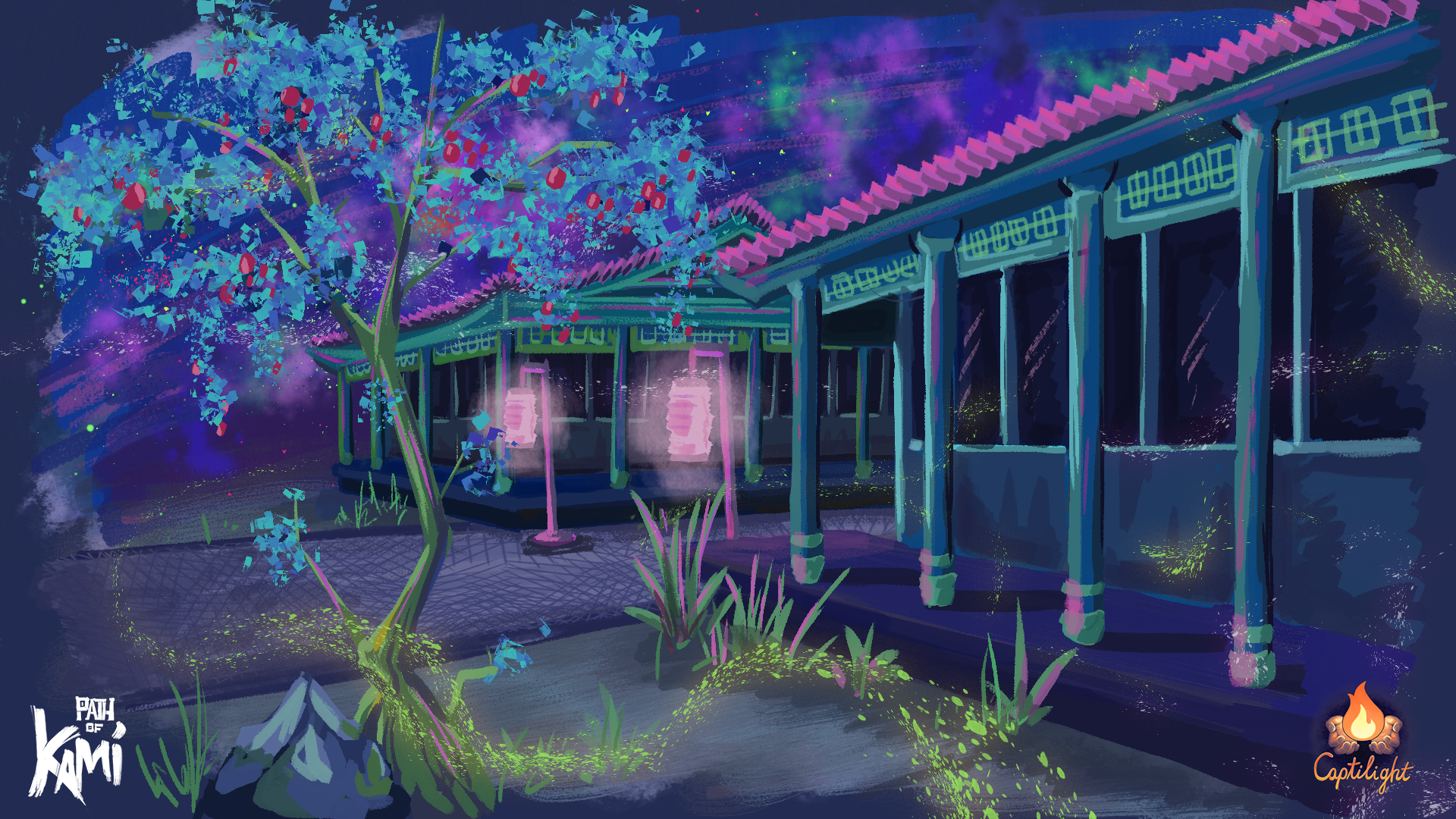 “We took a lot of inspiration for art and game feel from all of these while taking inspiration for platforming, exploration and puzzles from Zelda,” Galbraith says. “We knew we wanted the game to be a casual and relaxing experience, but still be engaging, and leaned on Journey and Abzu for references. We loved how these games approached it.”

Kazeyo’s expedition begins briefly in the physical world where he is safe and secure. Before long though he begins his transition into the spirit realm, where he finds himself caught in some treacherous territory. In this transitional period between leaving the living and entering the afterlife, he must traverse tough terrain while fighting off evil entities that seek to sap his spirit energy (which functions as the player’s health meter).

To find the way forward, Kazeyo must light lanterns left behind by the old gods, which are used to move platforms and help him reach new areas. However, this action also depletes spirit energy, which makes managing this vital resource doubly difficult. If he’s going to survive (or whatever is the closest analog to survival when you’re already dead), he’ll have to extract energy from fountains and collectibles along the way.

As the journey progresses, Kazeyo will also meet benevolent elemental spirits, who grant him access to different types of fire. He can use these to create or destroy various objects, which lends another strategic element to navigation and puzzle-solving. There’s enough flexibility in the game’s mechanics and level design to accommodate varying playstyles too, allowing players to approach the game the way they see fit.

“Path of Kami was built in a specific way to cater to different player archetypes,” Galbraith says. “If you’re someone who likes to just explore and wander around you don’t need to solve every puzzle to progress. You can explore, go off the main path and find all the collectibles and even some hidden areas. If you do like puzzles and solving every one, then you can do that too.”

While players will have to wait until sometime in 2023 for the full game to be released, there is a playable demo currently available on Steam that introduces Kazeyo and his first steps into the spirit realm. It begins in his mountainside den in winter, when the Wisp makes its initial appearance. While Galbraith won’t spoil how they know each other, it’s not actually the first time they’ve met, as they have some sort of connection from their lives in the mortal world.

In the opening scene, the Wisp offers some words of encouragement, and the pair begins their trek. Eventually, Captilight intends to build out a more involved role for the Wisp, helping to guide Kazeyo while filling in important details about their relationship.

“It’s not in the demo yet, but we also plan on incorporating a hint system for the Wisp to help with puzzles and provide additional lore,” Galbraith says. “Backstory-wise, the Wisp chose to be his guardian and to guide him, so Kazeyo is helping to fulfill its mission as well.”

From the moment the pair step into the elements, Path of Kami immediately strikes a balance between calm and urgency. Swirling snow flurries flitter around while a rushing river carves its way through the rugged mountainside, establishing a peaceful setting fit for a landscape painting. Yet there’s also an important mission afoot, albeit one the player is free to pursue at their own speed. These opening moments offer a sense of serenity while players acclimate to the game’s controls and deceptively idyllic setting. 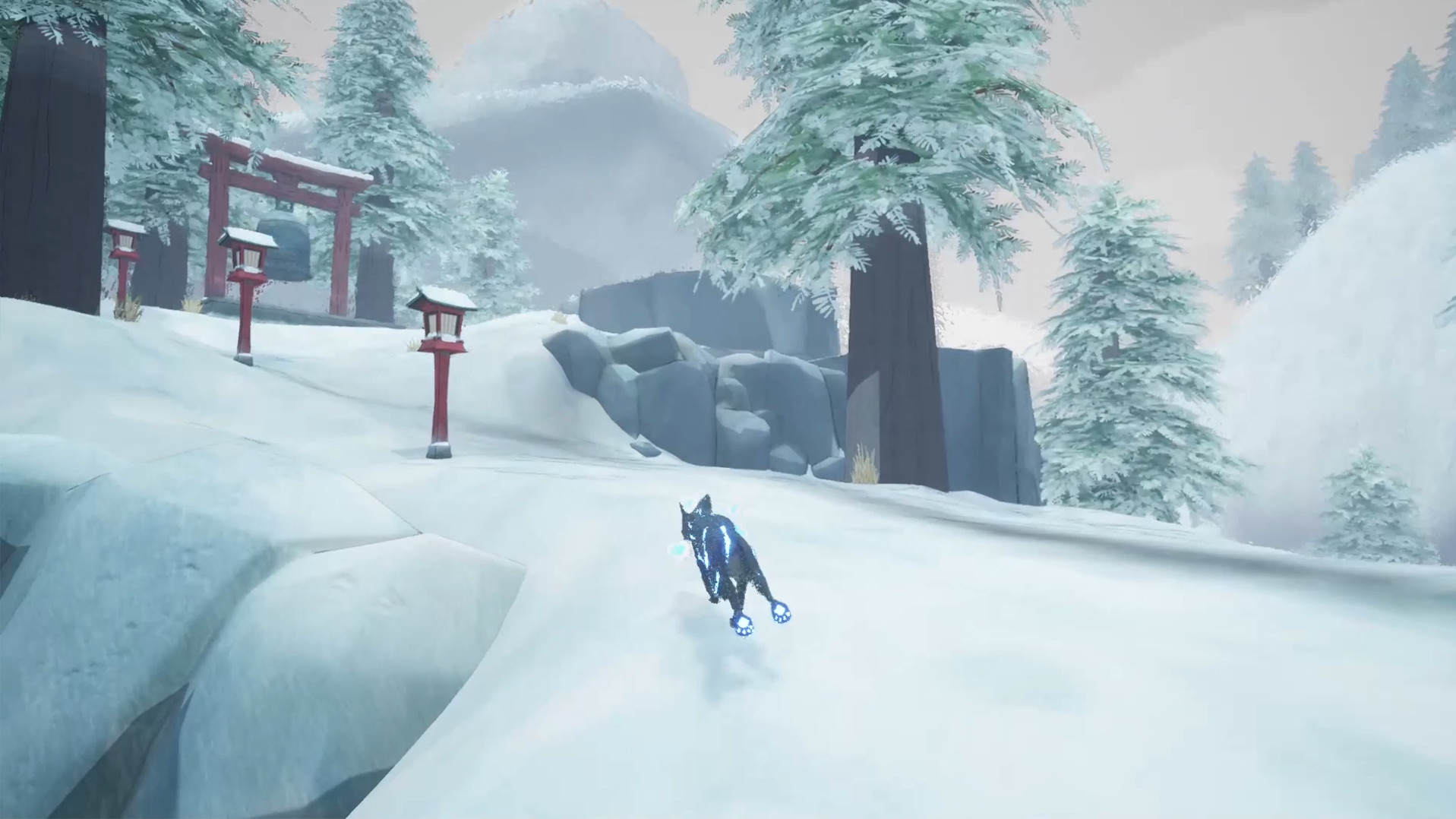 That control setup is simple and accessible as well. Equipped with a button to interact with objects and another to jump (in addition to basic directional inputs), a minimalistic layout means there aren’t an overwhelming number of inputs to memorize. There’s enough on offer to get a sense of how the game’s puzzles work as well, which trigger a decidedly Zelda-esque chime when a barrier to progress has been removed.

While Path of Kami: Prologue doesn’t have a firm release date as of this writing (which will feature a larger and more polished demonstration of Kazeyo’s adventure than what’s available in the free demo right now), it won’t be long before Captilight is ready to share more details about the game (possibly by the time this article is published).

“This June we plan on participating in the Steam Next Festival event where we’ll be showcasing a demo for the game,” Galbraith says. “We plan on releasing The Prologue in either Q4 of this year or Q1 2022. Depending on the reception we are considering of doing a Kickstarter for the full game later next year.”

For a story centered on something as heavy as confronting mortality, the atmosphere around Path of Kami feels remarkably light. Death and the afterlife are not exactly lighthearted fare to be sure. Yet it’s also so much more; a peaceful puzzler that reminds us that no matter what one is going through, no one is ever alone. Not even in death.

“I hope the game can be a great way to decompress from the outside world and help give players a sense that they aren’t alone, that there’s a guardian spirit cheering you on, and is there for you too,” Galbraith says.

The Throne of Bloodstone