Hello and welcome to the column! Before we get into the meat of it, I’m gonna recommend you go listen to WITCH, who were a fun 70s zamrock band that can bring you those good vibrations.

I Am Not A Witch is a British/Zambian film by Rungano Nyoni about an 8-year-old girl called Shula who is accused of being a witch. Shula is brought to a penal colony for witches where they are used by Mr. Banda, government official played by Henry B.J. Phiri, for both hard labor and as amusement for tourists.

What makes a witch?

Is it a hue of the skin?

Is it a twitch in the eye?

Is it a smell in the air?

Your guess is as good as mine. There are general ideas but, in reality, there is very little which is consistent or tangible about who gets defined as a witch and who doesn’t across different contexts. What a witch ends up being in culturally Christian countries is a marker of aberrance through which (gendered) violence can be justified and a particular order can be maintained. Witchcraft accusations have justified internal violences erasing “pagan” cultures, whether it’s the European witch trials or the mob justice in a Zambian village where a witch ends up being burned alive.

The use of witchcraft as an explanation for aberrance is present in the way that Shula is clearly coded as autistic in her mannerisms, being largely non-verbal, and her responses to the world around her. That neurodivergence, alongside her gender and lack of family, others her. She is marked as the outsider, the Other, the Witch. 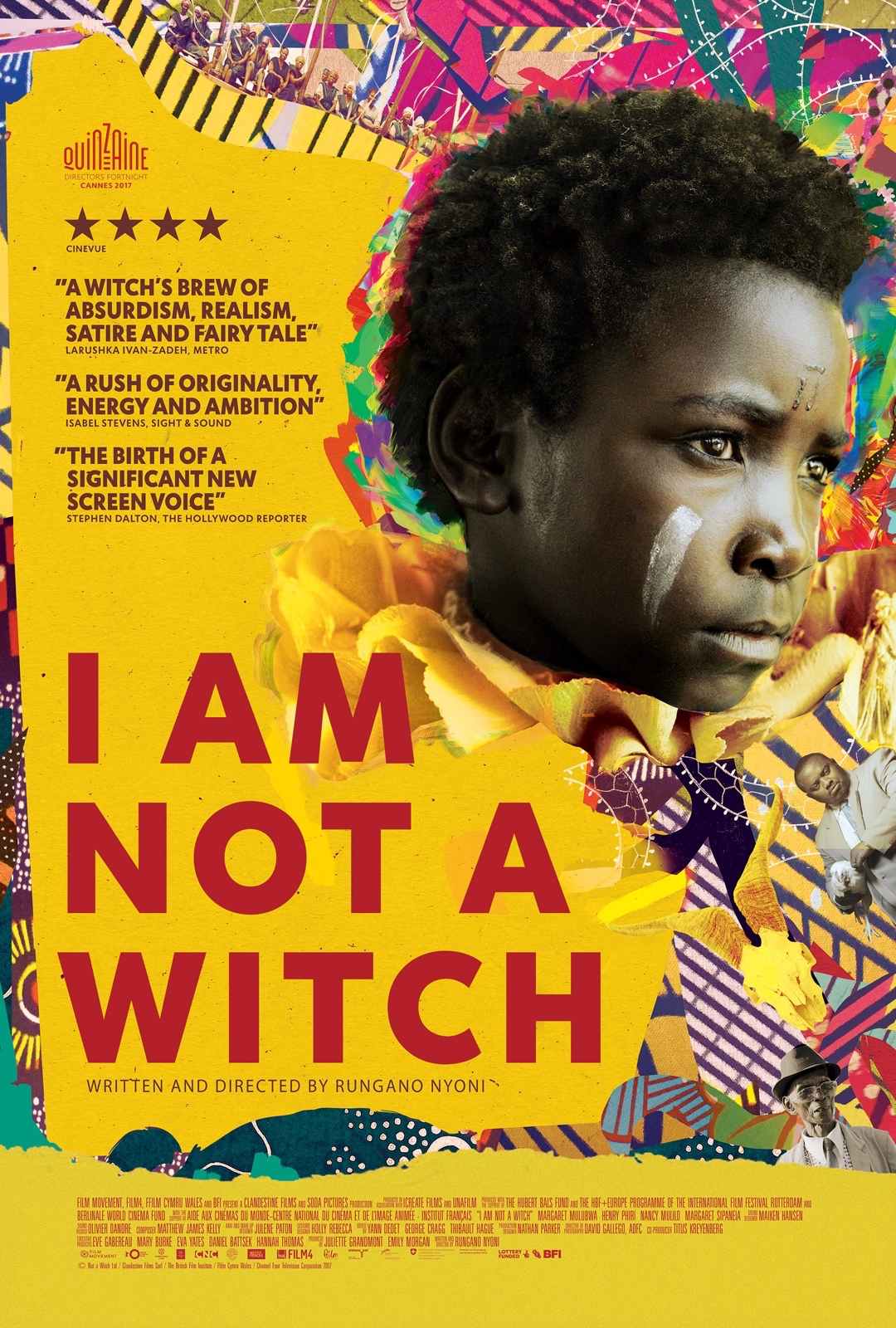 These violences are not just domestic but international as well. Part of the justification for colonialism was the cleansing of the pagan religions from these African lands, that was core to the “civilizing mission.” Conjuring up exaggerated and demonized versions of these varied cultures allowed the colonizers to justify their genocides and obfuscate their material interests.

You can see that material interest in maintaining that figure of the witch throughout the film.

The witches themselves benefit in small ways. They get gin and wigs, enough to carry them through the days and entertain them. Much like wage laborer’s living from check to check, they get just enough money to pay rent and drink their sorrows away until the next payment. For them at least it’s better than mob execution.

The domestic ruling class benefits greatly from the existence of “The Witch.” Banda drags Shula from place to place, using her to judge rural disputes, putting her on TV and showing her to tourists. A local queen of the region benefits, providing the government with these witches in some sort of unspecified deal. Gendered violence becomes a profitable performance. Banda’s witches are tattooed and given white face paint, told to dance and make shrill noises – all to sell this hyperbolized image (which the ironically operatic score accentuates). Beyond the showier stuff, they get used for hard labor in the fields, every possible bit of value is squeezed from the marginalization of these women.

The reality though, as is usually the case in post-colonial African countries, is that the people who gain the most from all of this are (white) people in the global North. This dynamic is shown most clearly when Shula is made to perform a dance for a white farm owner to tell him when the rains will come. When it goes wrong, Banda’s wife degrades herself to try and fix the situation because they recognize the social and financial power he has. The hard labor of the witches is most likely on farms owned by him or fellow white outsiders, and if the fields aren’t owned by people in the Global North, their produce is almost certainly going there. Even the dramatic witch performances are to predominantly white tourists likely on travel plans from companies based in the global North.

In the past few years witchcraft and magic has resurged as a practice in the semi-public sphere – especially amongst younger people through tarot, crystals and more. While that scene is too complicated to get into here, the same patterns of exploitation as can be seen above are already emerging. People of color develop spiritual practices which are driven to the brink by hegemonic forces installed by colonialism. Then white people use those practices to develop a ransacked spirituality which they build massive and profitable platforms off of, selling it to other similar people. A lot of liberal white feminists love to declare that they are the daughters of the witches they couldn’t burn – they’re more likely the daughters of the colonizers who were killing foreign witches then selling their trinkets in the town square. These patterns of marginalization and exploitation repeat themselves over and over.

The exploitation in I Am Not A Witch relies on lies and scammers and fudges – as people ignore the obvious contradictions of their positions to make a profit. Everything in Nyoni’s style is so absurd that the line between what is real and fake is imperceptible.

At one point Shula is put in front of a bunch of men in a line-up to decide who stole money from an elderly man. After deliberation on the phone with the older witches, the camera focuses on her face as we try to suss out her methods and, after what essentially amounts to a guessing game, she picks one particular man. They then go to his house and find the money there. It’s also implied that there could have been foul play. However, the details are left vague. The point is not whether real justice was served or not. In the end a man was found guilty, and the government officials got paid – something which is paralleled in the criminal “justice” across the world even when the court is full of fancy suits and ties.

Who needs truth when you can have money? 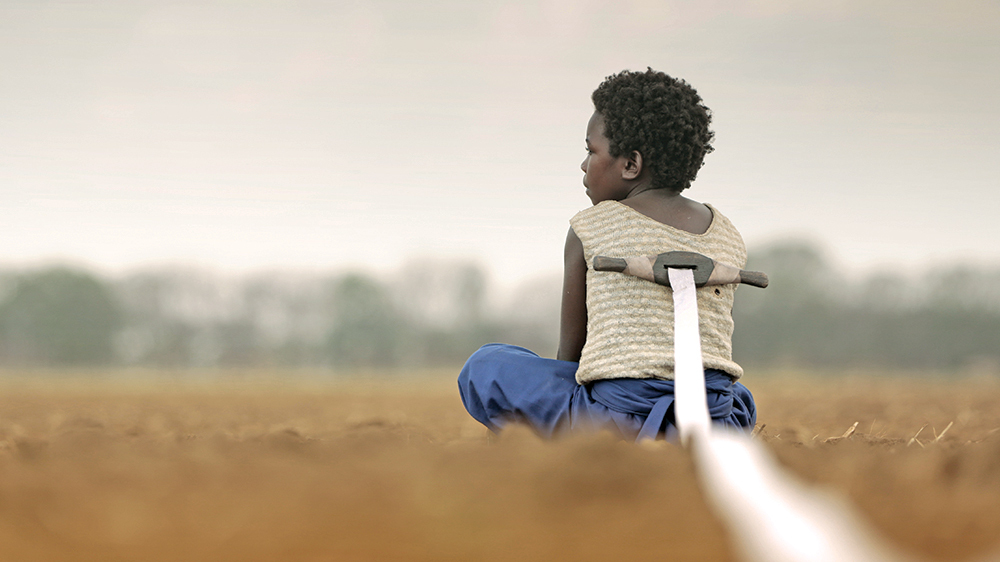 Occasionally the film will just pause for a second and skip forward a few frames. Or scene-to-scene there will be a jump of an indeterminable amount of time. It helps you feel Shula’s disorientation but also shows how deeply pointless it all is. There’s no real end goal here, or any direction, just a craven hatred and greed on both a domestic and international level.

It is the tragic ending which secures this message. Shula dances in the wilderness to try and bring about the rain and passes away in the process. One day later, the rain does come but she hasn’t lived to see it. The final image holds on the ribbons detached from their captives bloating in the wind above the truck which previously held the witches. Nyoni’s closing shot is powerful in its deliberate emptiness. In that void you feel the cruelty hit hardest.

What if Shula got the wrong man?

What if Shula did bring the rain?

What if Shula did enter that man’s dreams?

What if a witch did shape shift and eat a man’s entire family?

What if the old women were witches and flew away?

What if Shula was not a witch?

Who can possibly give a fuck about anything else?

Such a painful ending lays bare the real violence of the neocolonial capitalist system. The domestic and international ruling class profit as those at the margins become hollow playthings in a state of living death. It only takes so long before they steal the “living” as well.

I am Not a Witch